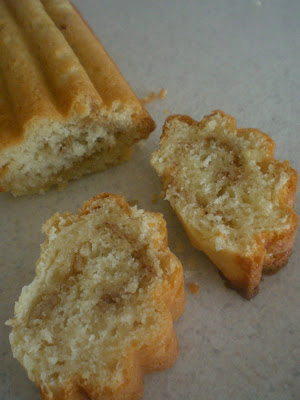 Or, otherwise known as – Uhm, Not So Much. As in, not so much Pecan, not so much sticky, and not so much buns. Or, as I am calling them, Yicky Notsomuchbuns. This recipe was a classic case of “I should have known better”, in fact, I knew better from the get-go. Sunday we had a Memorial Day cookout at my Aunt & Uncles house, and I knew I wanted to start the recipe when I got home, so I had the forethought to actually sit out the butter and eggs so that they would be room temp. This is not like me. I just don’t think ahead. Where the story starts going down hill is that on the way home, I knew I needed yeast, so we stopped at the local I Can’t Believe It’s Still In Business riverside “grocery store” to buy the yeast. Shoulda Known Shoulda Known Shoulda KNOWN. The yeast was in the refrigerated section (aka where old stuff in this town goes to die, along with the out of date Philly they were selling for 50 cents… is that even legal?) But anyway, I buy it. Get home and well, hubby and I both start coming down with some God awful stomach flu. We even sent Seven over to the grandparents house because neither one of us was fit to take care of anyone other than ourselves. But I knew the sticky buns would HAVE to get started, so I did start them, at around oh, 10 o’clock. I followed the damned directions word for word. Word for WORD I tell you. After 2 hours, looking at the dough which refused to rise because either A. My house is too cold, B. I did something wrong, C. Our water is too chlorinated, D. The devil wanted me to fail so he sold me hellish yeast, or E. All of the above, I don’t know, but the dough, when I went in to “pull it up” giggled a bit and then ate my fingers with sticky goo. So I said enough of that, it’s after midnight, I’m sick, tired, angry – I’m going to bed and the dough can work itself out in the fridge overnight. 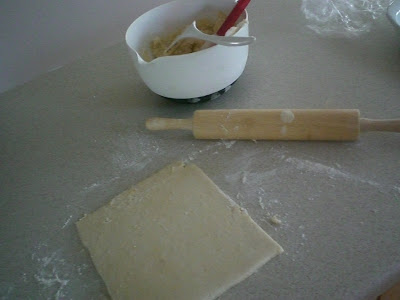 Well, I didn’t know what in God’s name to expect this morning, but to my surprise the dough somewhat resembled dough, and I was able with the help of a little extra flour to roll it out. It did actually roll out nicely and I was able to roll it up fairly well, too. I knew that I didn’t want pecans, as I was going to take these (if edible, mind you) with me this weekend on our vacation, and my good friend Adam can’t have nuts. I also didn’t really feel like making the glaze at all, if you must know the truth, because I really dislike honey, and, more realistically, my guts did not allow me to stand at the stove for any reasonable amount of time. So my big idea was to make them, then frost with a cream cheese icing. I had enough dough (with the whole batch, not halved, as suggested) to make 12 big guys, with another smallish log left over. What to do with the log? Well, this is when the retarded side of my brain spoke up and said “fancy their socks off and use the Pampered Chef fancy tube pan that’s still in its original box after 4 years” while my realistic side of the brain must have still been in the bathroom having convulsions. So the tube pan won out. 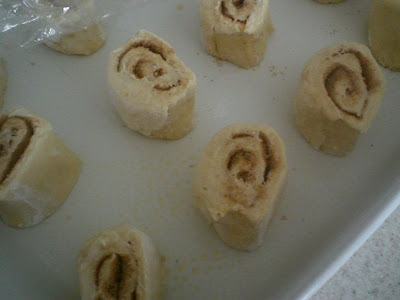 Did I mention already that we keep it cold in the house? Well, we do. Somewhere in the 60s. Dough doesn’t fare well here, so what to do? I carted everyone out to the car and locked ’em up until they rose. It worked, believe it or not, so I was a little stoked. It was at this point in my stoked state that I realized, hey, I bet those rolls needed a lot more cinnamon and sugar since you aren’t using the glaze. Damn Damn Damn. Now you tell me. Too late, in the oven they go. 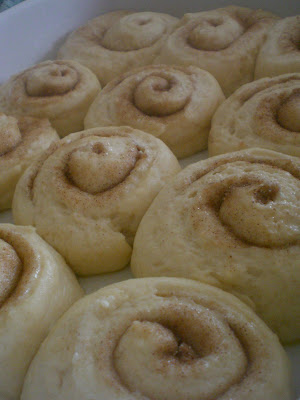 They didn’t poof up and get bubbly or merry or whatever the hell Dorie said they would do, they just looked like flat cinnamon rolls. And the tube pan. Oh day. Not so pretty. I told you so, retarded brain. I think the pictures speak for themselves. 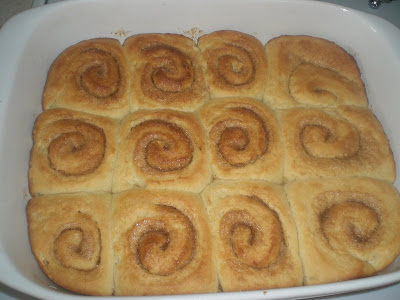 I did go ahead and ice the rolls with a yummy cream cheese icing, so now they kinda look like those cheap cinnamon rolls in the aluminum pans you buy at the grocery store down by the river for like a buck. A buck, I say. 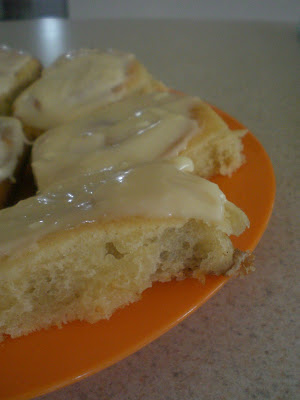 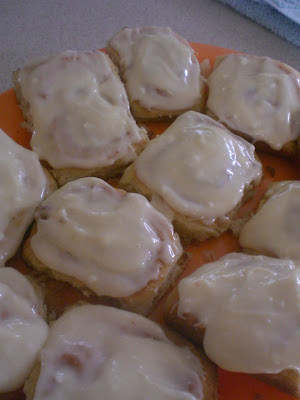 Speaking of bucks, what is this Dorie made of, anyway? 3 sticks of butter? Geez Louise, that’s big bucks. Anyhoooo, couldn’t tell you what mine taste like. I still haven’t eaten a bite of anything today and here it is bedtime. I’m setting this puppy up to post once Tuesday actually hits. I look forward to seeing all of the successful TWD creations this week…sadly, I wouldn’t count mine in that group. (Damn that grocery store. And my cold house. And the devil…oh yeah, and the retarded side of my brain.) 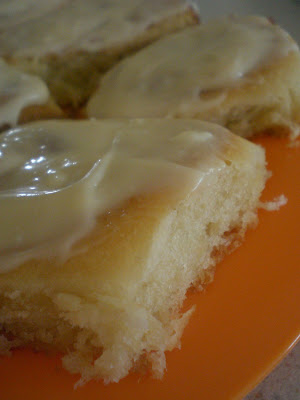 Ooh – forget to mention. See that pic with the back door propped open? Well, that’s because my baking fiasco also included the horrendous beeping of my smoke detector. What was on fire, you ask?? Hell if I know, but it was coming out of the oven. And it was loud. So there’s a pic of the back yard, looking up at the pretty little grape arbor I begged the hubby to build me. Isn’t he sweet? 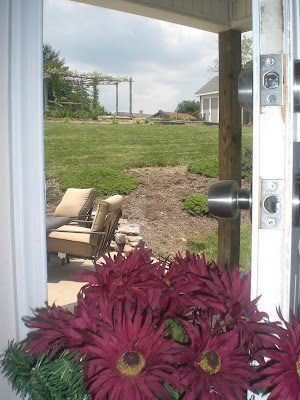