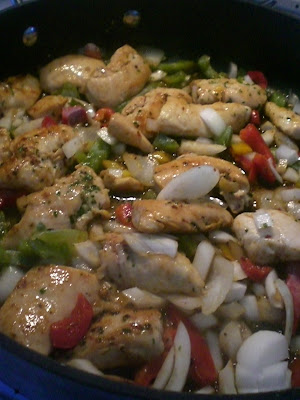 I’ll be honest, I almost didn’t do this. But how could I live with myself if I didn’t? I mean, seriously? This IS my group after all. It’s just that with Jon and I both being sick the past few days, a South American dinner didn’t really sound too good. So of course, I did it anyway. I was surprised to find so many good looking recipes out there for Brazilian Cuisine. The one I settled on, however, seemed more of a bunch of suggestions versus an actual recipe. This was great for me! It was easy to put together, and though it wasn’t the best thing I’ve ever eaten, it was good, better than take-out, and at least different than our norm. Jon really enjoyed it, so that counts for a lot.
I took this recipe-ish from a website called Maria’s Kitchen, at http://www.maria-brazil.org/. I did deviate a bit, in that instead of baking the dish in a “potpie” we instead rolled the filling up in flour tortillas and baked them with a little cheese. I also added in some onions and peppers to the filling, but only because we are getting ready to go on vacation and I didn’t want them sitting around in the fridge going bad. So, here’s my first MKMW post: Brazil…Enjoy! 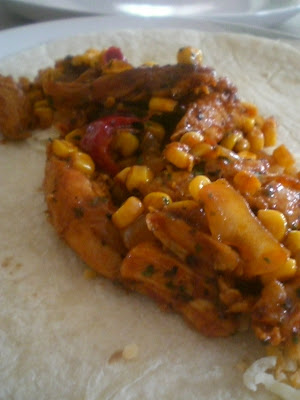 Torta de Frango
(Brazilian Chicken Pie)
Filling
Aleatha’s Brazilian mom would take a chicken breast or two and shred it while it was cooking. While it was cooking she would add some tomato sauce, onion salt, garlic salt, oregano, pepper, canned corn, and of course chopped cilantro. After the sauce thickened a bit, and all of the chicken was shredded, she would then put the pie together for baking. Give it a try and tell us how it worked out for you! You’re supposed to eat it cold. Yum, nice summer idea!
Dough
12 tbsp flour
1 tbsp baking powder
2 tbsp parmesan cheese
1/2 tsp salt
3 eggs
1 1/2 to 2 cups of milk
3/4 to 1 cup oil
Baking the pie
Preheat oven to 350º F. Put all dough ingredients into a blender and beat until smooth. Grease and flour a 9 x 13 baking pan. Pour half of dough mixture into pan. Add meat or chicken or veggies. Pour rest of the dough on top. Bake until a toothpick comes out clean. Let it cool, slice and serve with a nice green salad with vinaigrette dressing!
(Again, other than making the filling, I did not follow the recipe for the dough. It sounds great, though, so that’s why I included it for anyone who may want to try it!) I also served ours with a mixed rice blend flavored with chicken stock and cilantro – a perfect side dish! 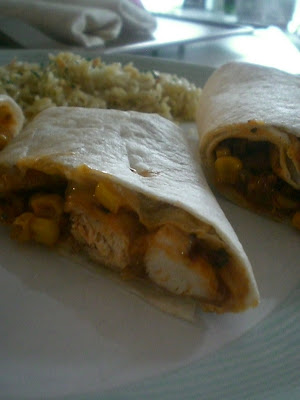 Spread the love
Don’t, Don’t You Want Me…. Tuesdays With Dorie…French Chocolate Brownies