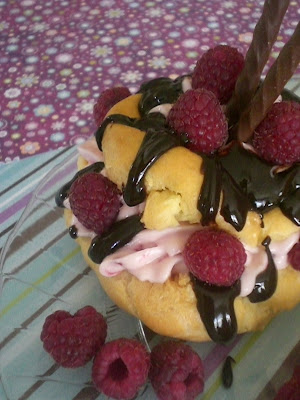 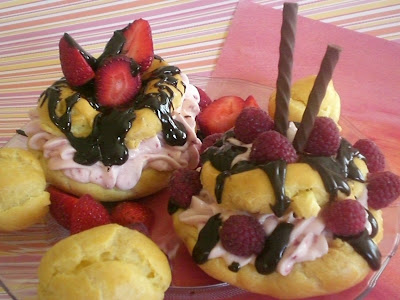 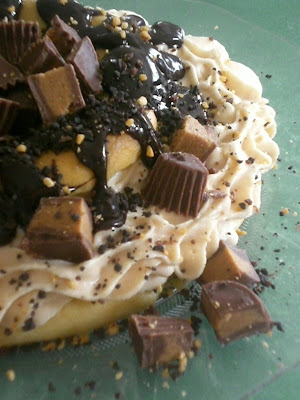 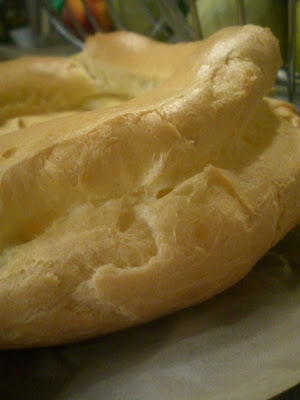 Notice, ya’ll, that I did not say “Peppermint” Cream Puff Ring. In fact, no, I did not use peppermint. I am trying to slowly convince myself back into liking peanut butter (see earlier posts for a big boring story about that) so my TWD this week is Peanut Butter Cream Puff Ring. There are other things about this recipe that I did not do according to Dorie. Not that she isn’t the bee’s knees, hell, we all know she is. It’s just that I was having to make eclairs for the cafe anyway, and I have been following Donna’s recipe for pate a choux since the beginning of my cream puff days. Because the recipe calls for so many eggs and takes a little bit of time and patience, I went again with her recipe for the dough. I knew how it worked, and quite honestly, it is very similar to Dorie’s,with very little exception. So, I piped out all of the eclairs I needed for my delivery this week, and had plenty left over to make a small ring for the TWD recipe. I did just as Dorie described, although hers looks a little bigger than mine. But anyway, I’ll be truthful…right out of the oven I thought – shizat, this looks like butt. It wasn’t big and puffy, not really, nor was it totally brown, and upon removing it from said oven, it kind of sunk into itself. I had to take it out though, as it was on the same pan as my eclairs, who were already done. Hey, and they are money, so I am taking no chances on burning those little guys up. 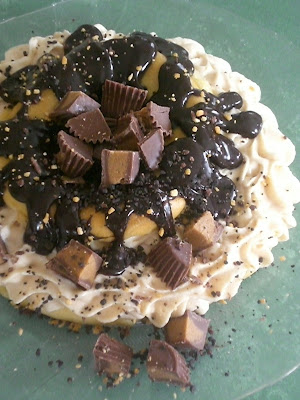 After a night of cooling, and a morning of filling all the eclairs with vanilla flavored whipped cream, I set about to do something with that ring. I didn’t want to do mint. Just didn’t. Not that it doesn’t sound cool and refreshing, but again, I wanted to do the peanut butter thing. So I added a few tablespoons of PB to the left over whipped cream, put it into my gooey pastry bag and piped and piped and piped the cream into that ring. (it looked so much better than it previously had….yippers!) After that, I again used Donna’s ganache (I may have to start calling this Tuesdays With Donna – you think?) and poured a bit over my ring and spread it on my eclairs. I still have a ton of it left over…what to cover in chocolate next, I wonder? I must have something just lying around that would taste good with chocolate on it. Hey, there’s Jon’s sunglasses…that could be tasty. 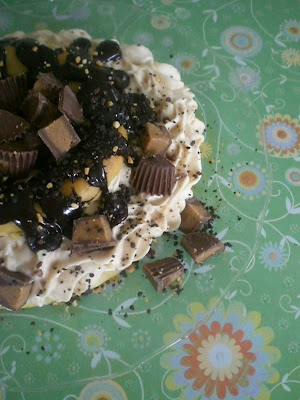 I kid. Sorry. Moving on…I cut up a few mini Reese Cups and tossed them into the center and over the sides of the ring, then sprinked PB/Chocolate flakes and a few Cocoa dots on for prettieness and Voila – Done and Done. We just ate a very small piece of this for dessert, and boy is it tasty. It’s kind of like a very light version of the PB torte we did (much lighter) and yet with the pastry, there is something to chew on. That to me is a great combo. I will probably make this again in the future, as now I know what I can do with my leftover pate a choux! 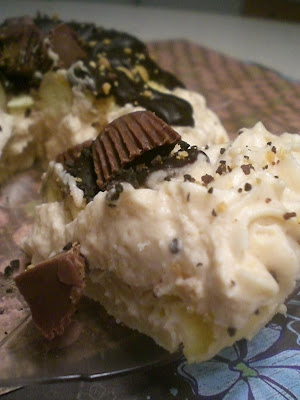 Seriously people, it kills me to even type that. Pate a choux? 2 months ago I would have told you it was a disease or duck liver….not something I would know how to make. This group has been one of the best things that has ever happened to me – at least domestically……. 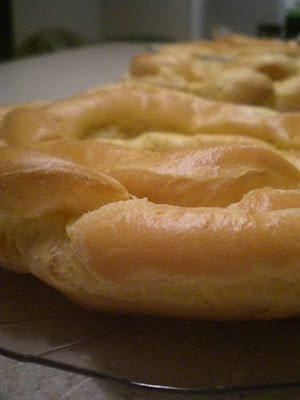 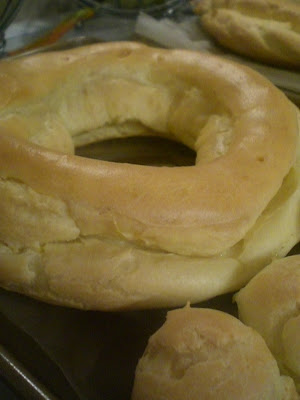 UPDATE: I typed the above on Thursday. Now it is Frday night, 12:55am. I have just removed TWO more Cream Puff Rings from the oven. These things are the bomb. Ask Hub – I made him get up off his Lazy-boy and come into the kitchen, where I was sitting in the floor by the oven door watching them bake. Big Beautiful rings. Puffed up superhigh. I still didn’t let them bake as long as Dorie would have – I like them just a tad spongey where hers are not, or appear not to be anyway. So of course they sank a bit, but no biggie. So much prettier than the first one I made, which was delish, if I do say so myself. Why did I make more? Well, it was 10:30 on a Friday, and I had nothing better to do. How sad is that? I should be weeping into my keyboard writing that, and yet I know many of you do the very same thing. Pretend that you were out at some bar, getting your drunk on with Mr. Hottie (after 6 shots) and making the TWD recipe was something you forced yourself to do at the last minute. Go ahead. I won’t believe you, anyway, as I doubt you can even dance. And Mr. Hottie is too young for you, or worse, he’s over 40 and still at the college bar. Real winner you picked there for your alibi…you should have just said you were baking at 10:30 on a Friday night. 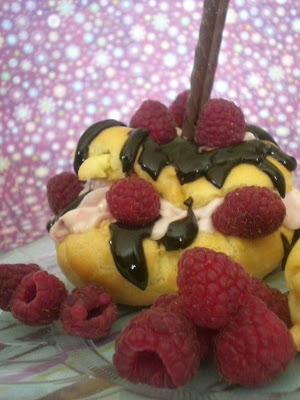 God, what a tangent. Real reason I made more is that Saturday I am supposed to go to a cookout, and Sunday is Father’s Day Brunch at the church…so I wanted to take something absolutely no one else would ever dream of taking. I had 2 full sized rings, and a couple of babies. The mint one, I apologize, I forgot (gasp) to photograph. But it looked great and tasted alot like a York Peppermint Patty. I followed Dories recipe for the cream – no variance there. So, I took it to the Father’s Day’s Brunch and there was nary a bite left, in fact, I almost didn’t get any of it myself. I wish you could have seen it – I had a few Choclate Mint Straws on top to make her pretty, as well as some chocolate mint sprinkles strewn about – a real masterpiece. Dorie may even have liked it! For the next one, I whipped some cream cheese, butter and vanilla, added in some raspberry jam and a few fresh raspberries and a handful of 10x. This one tastes SOOO Good! (And photographs well, too, I think!) 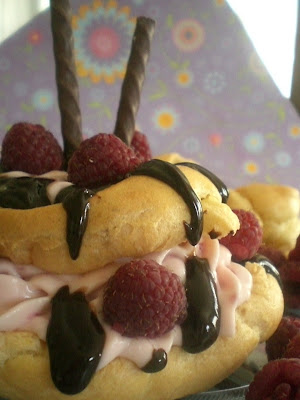 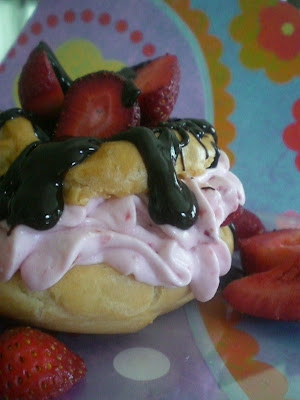 For the 4th (four people! Seriously – did anyone else make FOUR!?) I whipped some cream, added fresh strawberries from our garden, some 10x, and a little bit of cream cheese and voila – another tasty ring! All of course had the chocolate ganache. The strawberry ring I garnished with strawberries and a little bit extra chocolate, and the raspberry ring got a couple of my Chocolate Raspberry straws (I love those things!) 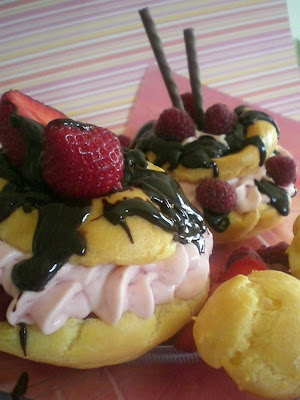 I can’t wait to see how everyone else in the TWD clan did with this week’s recipe…great choice from A Consuming Passion! I’m hooked! (as if you didn’t gather that already from the one, two, three, FOUR varieties I made…)