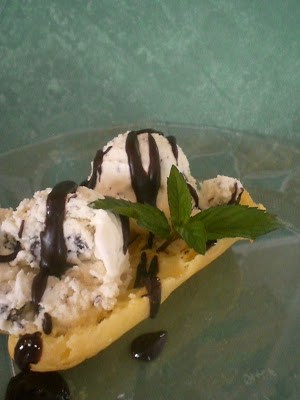 No, that isn’t a typo. Last night, while working on this months Daring Bakers Challenge (which I will post at the end of the month – stay tuned!) I had enough time during my “waiting times” to make homemade ice cream. I knew I was going to, so earlier in the evening, I picked quite a bit of the Chocolate Mint that grows in our creek. It’s a long story about why it is down there, but anyway, it’s there.

So, following Dorie Greenspan’s technique for infusing heavy cream, I set about to boil the cream with about 40 mint leaves, left it to steep, and then, at around 1:30 in the morning, I removed it from the fridge, added the rest of the ingredients, dumped it in the Cuisinart (the ice cream baby) and a little while later – Fresh Fresh Fresh Chocolate Mint Chocolate Chip Ice Cream. 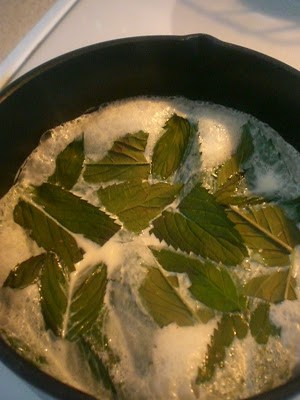 Today at lunch, Jon was working nearby, so he and his co-worker stopped by to eat. Guinea Pigs! I unfroze a few mini-eclairs I had made previously and sliced them open, scooped some of the ice cream onto them, and poured leftover chocolate ganache over the tops – voila, gourmet dessert for two hungry surveyors. 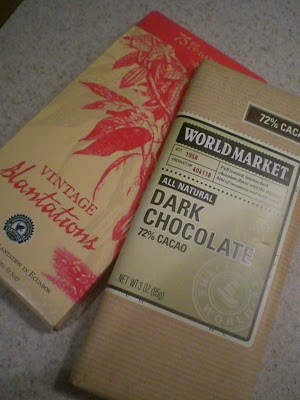 Verdict…Very Good response form the boys. It is very minty – and tasted homemade. You can tell it is herbal, versus an extract. Overall, nice flavor and goes especially good with the eclairs. Perfect for a nice hot day – give it a shot, it’s pretty easy!
Chocolate Mint Chocolate Chip Ice Cream 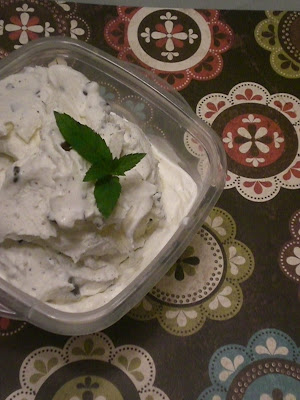 2 cups Heavy Whipping Cream
40 Chocolate Mint leaves
2 cups Whole Milk
1/2 Vanilla Bean, scraped
1 tsp. Vanilla Extract
1 cup sugar
1 1/2 cups (give or take) Semi Sweet chips or chopped from a bar
In a small saucepan, bring mint leaves and whipping cream to a rolling boil, remove from heat. Allow to steep, covered, for one hour. Place in refrigerator for 2 to 3 hours. Remove from fridge, strain, extracting as much cream from the leaves as possible. Discard leaves.
Combine minted cream with milk, vanilla extract and seeds, and sugar. Whip with whisk until fluffy (this makes it nice and light). Add to ice cream machine and follow manufacturers instructions.
About 15 minutes into process, add chocolate chips/chunks. They may not combine well during processing, but don’t worry, you can stir it up later. When finished, scoop into freezable container and allow to chill thoroughly for at least 2 hours before eating. Enjoy!