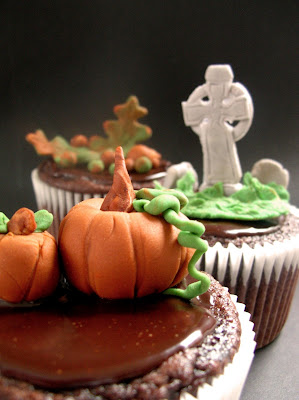 This week’s TWD recipe was chosen by Clara of I Heart Food for Thought. Whoodda thunk it? CB choosing a cupcake? Nooooo. Surely you jest. 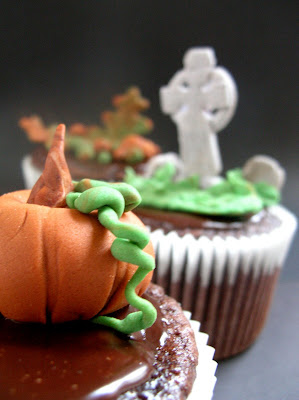 These cupcakes are all chocolate. Chocolate cake with chocolate icing. My icing didn’t really work out as Dorie had prescribed…it kind of seized up when I threw in the powdered sugar. Maybe it was because I halved the recipe? Who knows. Anyway, I threw it out and instead used a nice chocolate ganache on top. Really! That’s my only change!
CB suggested that maybe we could dress them up a bit with Halloween decorations since it’s just around the corner. I had grand illusions of a witch’s castle, a big scary tree, and a ghost hovering with the help of wire. 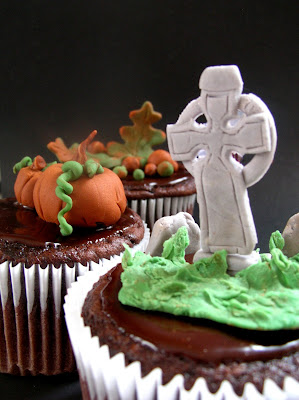 Told you it was grand. But it was more delusion that illusion. So I settled for a couple of pumpkins, some autumn leaves, and an old Irish tombstone made of fondant. (that booger was difficult!) Sorry for the somewhat late post- I actually had to work today…and the light this morning with a sky full of snow clouds really didn’t lend itself to great photos. You take what you can get sometimes!
Now, I know I can’t wait to see everyone else’s great Halloween cuppys – so you should go see them, too! 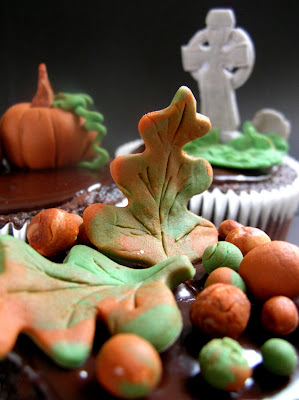 On a side note, you have until the 3rd to get your Fashionable Pie baked and blogged for the second edition of “You Want Pies With That?”… so don’t forget to Vogue!!