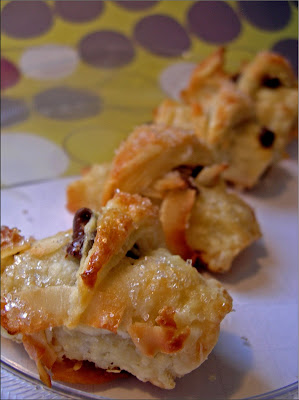 Rugelach.
Huh?? Sorry, never heard of it. Yes, I am sheltered. But I own Dorie Greenspan’s Baking: From My Home to Yours, so the sheltered days are passing. I am being adventurous, thanks to my pals over at Tuesdays With Dorie…and this week, I made Rugelach courtesy of Piggy’s Cooking Journal. 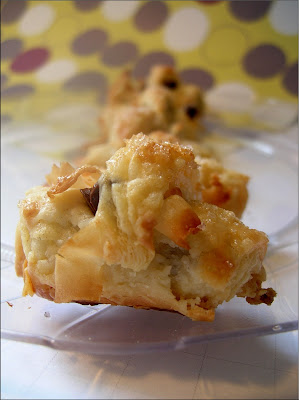 So, Rugelach. It’s just a cookie. A cookie shaped like a crescent roll. Flaky, too, which kind of surprised me. So worry not, readers who have never made rugelach…it is not a disease. Not another word for a sneeze. Not a type of german dog. It’s a cookie.
My biggest gripe is that the dough takes awhile to chill. That always gets me. I don’t like to have to wait on my food to chill. It’s bad enough that it has to bake, much less spend all that time chilling out. Hell, I don’t even get that long to chill out these days. Perhaps I am jealous. 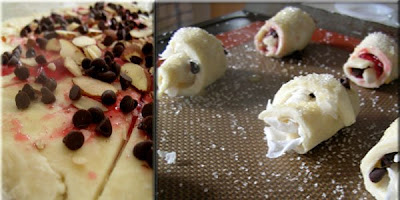 You readers that are familiar with me at all will know my other gripe. Dried fruits. Dorie loves them. This recipe called for dried currents. Come ON. I don’t own these. I’m not going to go BUY these, either, even if my grocery store does carry them (not so sure they do, to be honest, as they didn’t even carry canned PUMPKIN until like a week ago.) So, I left it out. I also halved the recipe. Some of my cookies were filled with raspberry jam, almonds, and chocolate chips (yummmmm) and the others had coconut and chocolate chips. Neither kind had cinnamon, like the recipe called for, because I didn’t think that sounded too tasty. I don’t really like cinnamon mixed with chocolate. It reminds me of my friend Nicole who can never leave a recipe alone and she made preacher cookies like 12 years ago and put cinnamon in them. I still can’t get passed that…even though she knows I love her, come on, Nic, even YOU know they were nassssty. NaaaHaaasssTeee. 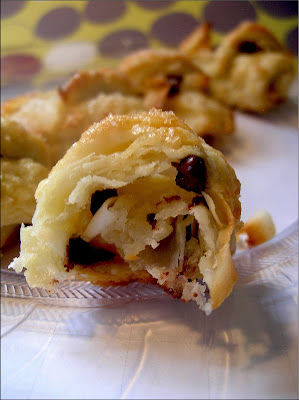 Rugelach are good. Jon liked them, too, which surprised me. Of the two variations, the one with jam was much better, and I will make them again one of these days. I wish I had used sweetened coconut for the others, as it did lack a little sweetness…I think it also needed a little something else, too – maybe caramel? Not sure…just something.
Now, next week we are to be making Kugelhopf. It’s a cakeish thing. Breadish, cakeish thing. It’s more than likely not going to be making an appearance on this particular blog, as, gasp, I don’t even own a Bundt pan much less a Kugelhopf pan….and well, time is short and this recipe may not get made….but we’ll see. Oh, the anticipation. I can tell you can hardly wait.