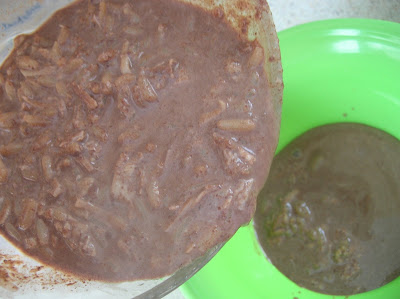 Isabelle from Les gourmandises d’Isa chose this week’s recipe. Nothing against Isa, as I am SURE that this is a good one.
If you aren’t ME.
And live HERE.
Or whatever.
This was gross-a-gag-a-maggotty.
Not the taste, mind you. That was er, okkkkkay.
But the consistancy? naaahhhaaassstyyyy.
Perhaps it is the fact that risotto does not live in this town. You see, I sent the Hub to Food Lion with instructions. “This town is bakwards, honey, so check the rice aisle first and then check to see if they put it with the pasta.”
Half hour later, he comes back with Orzo. Because it looks like rice. And sounded Italian.
So I go out. I even ask the FL Manager. Ummm, no. No risotto here.
Walmart? No.
Okay, those are my only two options, not that the old, closed down “Grocery Store That Time Forgot Down by the River” would have had risotto.
So I just used what rice I had.
Dorie said that the way to tell that the “pudding” was done is that it would have soaked up 80-90% of the milk.
Oh really?
That did not happen to me. So I drained much of the liquid off. And then stuck it in the fridge to “thicken” as Dorie suggested it would.
Oh really?
Mine is so runny, I can’t even tell you.
I did taste it though. I made mine in chocolate, semi-sweet instead of bittersweet, and added some coconut. Blindfolded, it tasted so-so. It’s the consistancy! Gross!
If I had to describe what it tasted like, I would say Coco-Krispies, left to sit in chocolate milk for a couple of days, stuck in the fridge and super cold. See? Not horrifying, but not something you’d be all about making again anytime soon.
But I made it. And that’s that.
And next week I will make a Thanksgiving Two-fer Pie. You may see it on Thursday.
That’s allowed…and I don’t even make the TWD rules.
Speaking of TWD, go check out the rest of the 300 plus puddings made this week.
Gag.

Oh, and hey? Scroll on down. I have a giveaway!

Spread the love
My First Giveaway!! Pardon the Interruption…