Going Global with a pasta salad 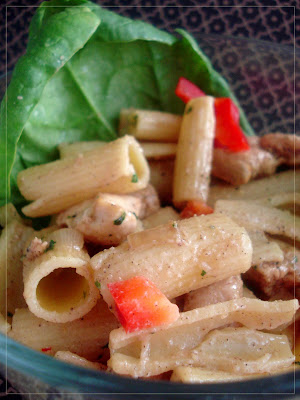 Geez.
I am burning up the blogs these days, thanks to the Penny Pinching Pantry Raid. First, the Nutella Sandwich. Now, I have stolen an idea from Jen of My Kitchen Addiction. She posted a recipe for what she calls Peanut Chicken Pasta Salad – and darn if it didn’t look so good and sound so thrifty! (Just so you are aware, that’s my Blogger Voice. My Real Life Voice would never say Darn. Nor would it be accented with exclamation points. I am not a voice raiser. I tend not to get overly excited about anything in general. I couldn’t even tell you the last time I was supremely giddy over something, thus requiring an exclamation point. But Blogger Me is excited about lots of things, especially food. And now you know. Or should I say Now You Know!!)

So anyway, this pasta salad. Jen’s called for snow peas, which I didn’t have. So I just chopped up a red pepper and threw it in. I found the red pepper hidden under the apples in the Crisper – so, score. I also used the chicken from the freezer, and added in a white onion that had been unnoticed on my cellar steps. Again, score. I grabbed a couple of green onions from the garden and threw them in for good measure and called it a meal. Oh, I cooked up a bag of frozen corn just so we could have a side dish. All in all, a really nice meal. Different than your typical Pasta Salad, which is nice because it’s good to change things up from time to time. Next time I make it I will add more spice…it needed a little kick in the pants! We still have plenty of leftovers, so we’ll probably have it for lunch tomorrow. Ka-ching! It’s a twofer recipe, a great thing when you are Pinching Pennies!

Check out Jen’s Blog for the recipe – I think you can mix it up as much as you want and still have great results!

Here’s a quick rundown of our Day Two Consumption: