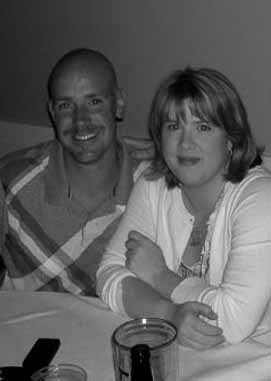 Three years ago, before Seven was born, we joined our local Country Club. It’s not what I would say fancy. Or smart. Or Southern Genteeeeel. It’s more like the place for us middle class folks to take our kids to the pool while our husbands putter around the 9 hole course and drink beer all day. But once a year in July, the big thing is the Member/Guest Tournament. Jon always asks his dad to be his partner, so his folks end up staying with us for a few days and they play, rather unspectacularly, but have a good time doing it.

I, personally, am a homebody. I don’t fare well in social settings. It makes me anxious, nervous – even sick to my stomach to be dropped into a scene where I am to make conversation with multiple people. But I took one for the team on Friday night and went to the Welcome Dance and Cocktail Party, where Jon and I ended up staying until after Midnight. And then Saturday night, even though I was dog tired from making a wedding cheesecake and 100 cupcakes (I’ll post pics from that tomorrow), I went to the big dinner and ended up being the last group out the door at nearly midnight. It was actually fun, sitting around talking to some friends (hi Rebecca!) and family (hey Jay!) and even though I wanted to come home, I stayed. I did however, draw the line at going to a Ping Pong Tournament held in a crazy mans basement. Maybe it really is Ping Pong, or maybe Ping Pong is code for something else, but I wouldn’t know because my butt didn’t go.

So, here’s a glimpse of me and the Hub, actually out somewhere, doing the social thing. I just needed to prove it.

Day Eleven Rundown: 99 cents. Jon again “forgot” that you can’t just grab a Coke at the grocery store. I gave him hell for it. Hopefully it won’t be an issue again.

Breakfast: Everyone kind of just ate their own thing. Lea made some eggs & toast, Ron had some bread, Jon skipped breakfast I think, and I had leftover popovers, which are sort of grossish.

Lunch: I had leftover food from the nght before, so did Lea and Seven. Ron & Jon ate whatever they could grab at the tournament. Who knows what they fed them.

Dinner: It was part of the Country Club Tourney – well all got BBQ. So, no money spent.

Tomorrow I will be posting pics of the wedding I made the cakes for. Hopefully they were happy with the results!

Spread the love
Let’s Cool Off a Bit. Wedding Cheesecake