Sometimes you just need life to be a little easier.

And be doused in liquor.

This simple recipe for Limoncello Pear Sorbetto takes care of all of that, and is the perfect accompaniment to a Bertolli Dinner for Two. What could be easier than mixing up a few quick ingredients before you pull out the skillet, and then letting the ice cream maker run while you whip up a frozen pasta meal and toss a quick and easy salad?

Nothing, I tell you. Or should I say Niente? A week or two ago, Paula, the wild force behind the hit Italian Food Blog Bell’Alimento, asked me if I would be willing to create a dessert for Bertolli. I said no, of course. 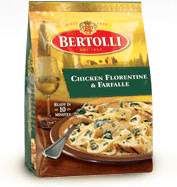 Just kidding! I would do just about anything for Paula (that’s not an invitation to abuse me, Paula!), and as we already love Bertolli here at Casa Doughmesstic, it was a no brainer to get involved. I really didn’t want to COOK, though. It’s so hot already, and cranking up the oven just didn’t feel right…and summer nights call for some liquor sippin’. So, what is more reminiscent of Italy than Limoncello?

Seriously, you can throw the start of this sorbetto together in just a couple of minutes earlier in the day, then just before dinner continue on. As the mixture whirrs in the ice cream maker, you have time to make the frozen Bertolli Dinner (I added peas to the Chicken Florentine & Farfalle), as well as chop a little lettuce and tomatoes for a side salad. Full meal, start to finish, in under 30 minutes. Just let the sorbetto set in the freezer while you eat, and pull it out for an after dinner treat. You’ll be so glad you did!