That’s a little fancy sounding for Doughmesstic, isn’t it?

Don’t worry, it’s not. It’s beef, braised in beer. There are also onions, some new potatoes, and carrots,too, rounding out a pot roast unlike any other.

I made mine in Le Creuset’s GORGEOUS Doufeu.

Have you seen this incredible creature? It’s stunning (well, it IS Le Creuset, after all), and the idea behind it couldn’t be more ingenious. While your standard French Oven is oval, with an oval lid, the doufeu differs in that the lid isn’t domed. Instead, there is an indention – a bowl of sorts – in the enameled cast iron lid. Fill it with ice, and as the stew simmers, the ice melts, causing condensation that self-bastes your dinner. This means less liquid is needed in your sauce in order to cook, resulting in more flavor versus more water. It also means juicy, succulent meat. Perfectly done vegetables, no mushy potatoes, no overcooked carrots.

I may never cook in anything else. I’m sure you know I wouldn’t introduce you to something so stunning without offering to GIVE YOU ONE, right?

Of course I wouldn’t. If you want to win a Doufeu from Le Creuset, valued at $490, tell me this. What color would you want? Me, I have Ocean. It’s far and away my favorite Le Creuset color. Just scoot over to the LC webpage and choose – there are 4 colors. None are wrong. Now, leave me a comment, and you are entered to win. 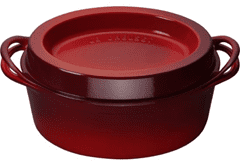 You want multiple chances to win though, right?

For another chance, Tweet the link to this post. Again, return, and let me know you did – I’m not psychic!

For a third and fourth chance, please Fan Le Creuset on Facebook and/or Follow them on Twitter. Each one counts, so that’s two additional chances, just be sure to comment for each one you do.

So there are FOUR MORE chances!

I highly recommend Following doughmesstic on Twitter and becoming a Fan on Facebook as well, as I have this tendency to throw bonus entries out via those two…so it can’t hurt!

Contest is open to addresses in the US only, and closes at 11:59pm on February 10, 2012. Prize is supplied and shipped by Le Creuset. I was supplied one to review, but was NOT paid for this post, and all opinions are my own.