A Dining Guide to the Four Seasons Seattle? Of course! 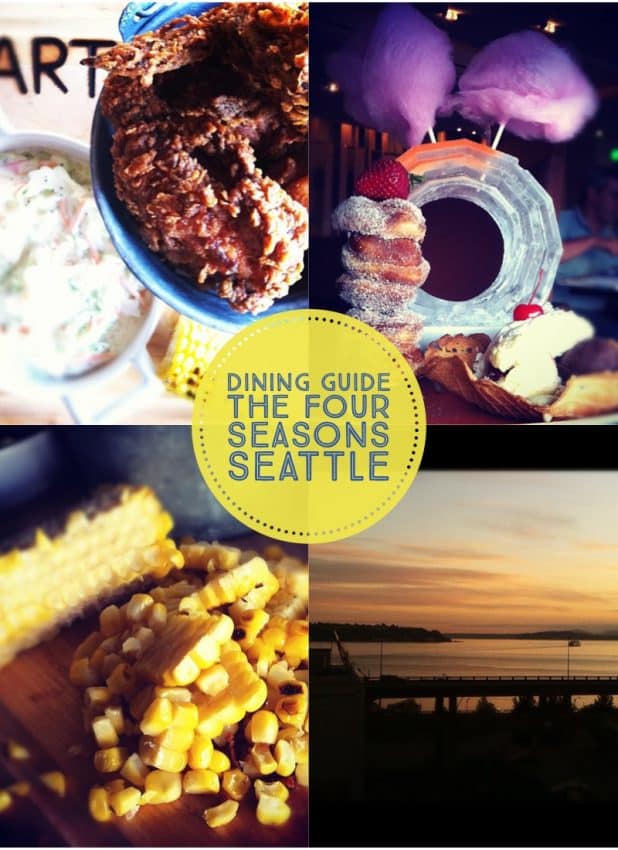 Remember when I went to Seattle? I’m sure you do, considering I refuse to shut up about it. Sorry! I just can’t help it…it was one of the best trips I’ve been on in recent history, full of exciting parties, great friends, and of course, great food.

After all of the events we had were over, and our schedules calmed down, Paula and I were invited to the Four Seasons for an incredible farewell dinner at ART.

Dinner. At the Four Seasons.

Thank goodness for Twitter, that’s all I can say. Twitter is awesome. Twitter is how the PR for ART met us. Therefore, I love the Twittah.

I also am a new lover of the Four Seasons Seattle. Especially ART. 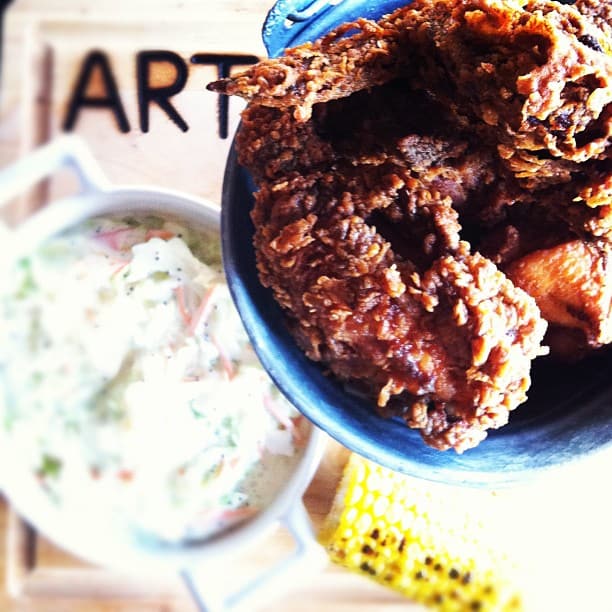 We were seated by the window, overlooking the water and the new Ferris Wheel in the distance. Appetizers came (I had a plate full of ridiculous fried foods), dinner came (it was carnival fare – so I tried the fried chicken bucket, corn on the cob, and cole slaw – YUM!) So, not exactly what you might expect from the Four Seasons, but so well done! I was tweeting and Instagramming the whole meal, and I got varying answers to this question…so I’ll ask YOU. Corn on the Cob – do you cut the corn off, or leave it on? Me? I cut it off. It’s better. It. Is. Better. Sure, you can disagree, you’ll just be wrong. Hehe! 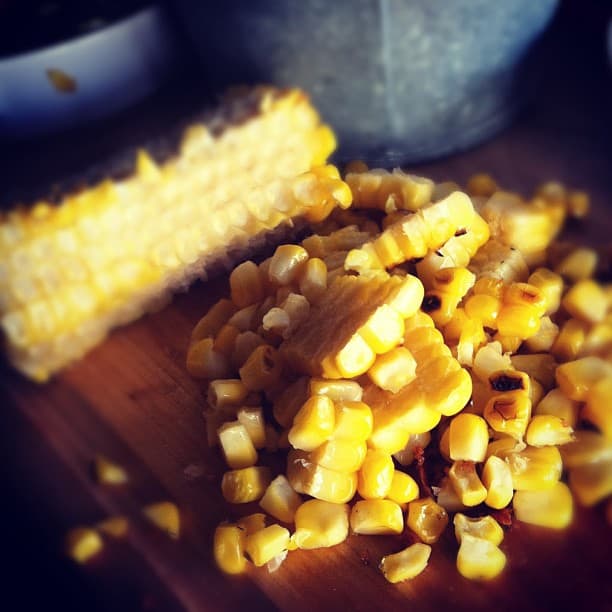 You’d think after all that food, we’d pass up dessert.

Before we were even presented with a dessert menu, the server brought us out the absolute most incredible dessert I have ever seen. Ever. Look at this thing. 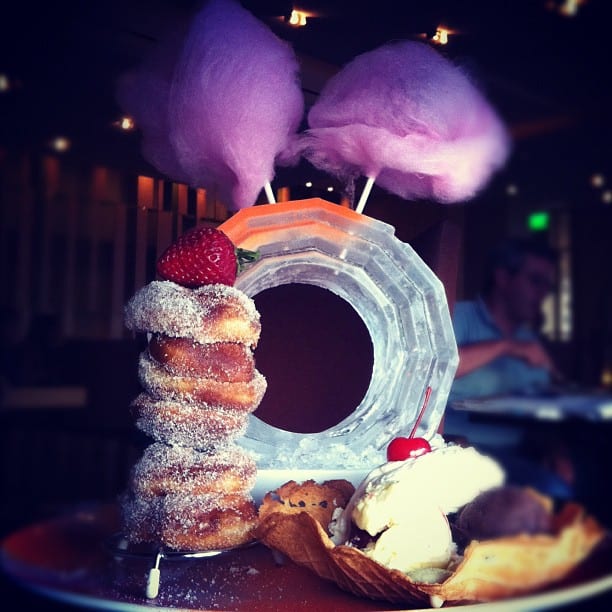 It’s called the Cool Spin Dessert. A ring of ice, in honor of the new Ferris Wheel, topped off with melt in your mouth fresh made cotton candy (there were chocolate truffles inside that cotton candy!) As if that weren’t enough, there was a trio of ice creams (die), and a stack of funnel cake/doughnuts that pushed the dessert over the top.

I could have bathed in the cotton candy – definitely the best I have EVER had, but, I have no cotton candy machine. Kind of necessary to recreate here at home. Ice cream? Well, you know I just did that. So… I had to have that doughnut recipe.

And here she is. I just made another batch of them, and they do not disappoint. 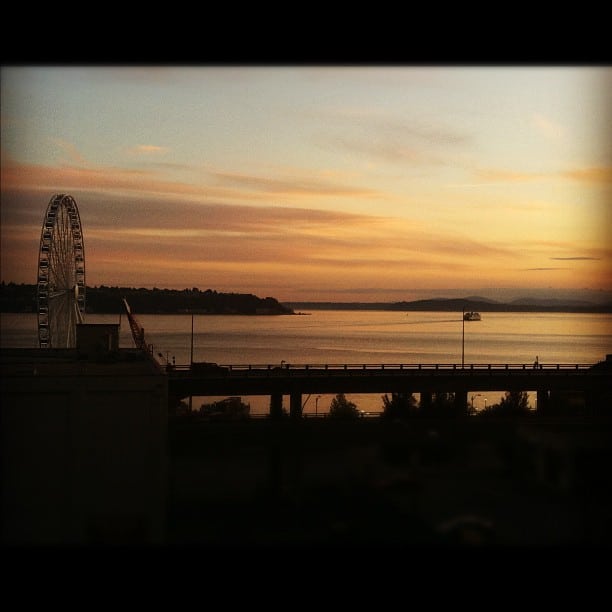 Now you can make them, too. If you need something to gaze upon, just pull up that picture of the Seattle view from ART…it’s almost like you’ll be there. 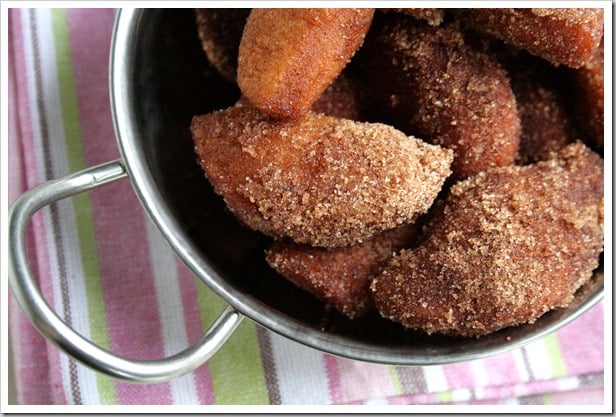 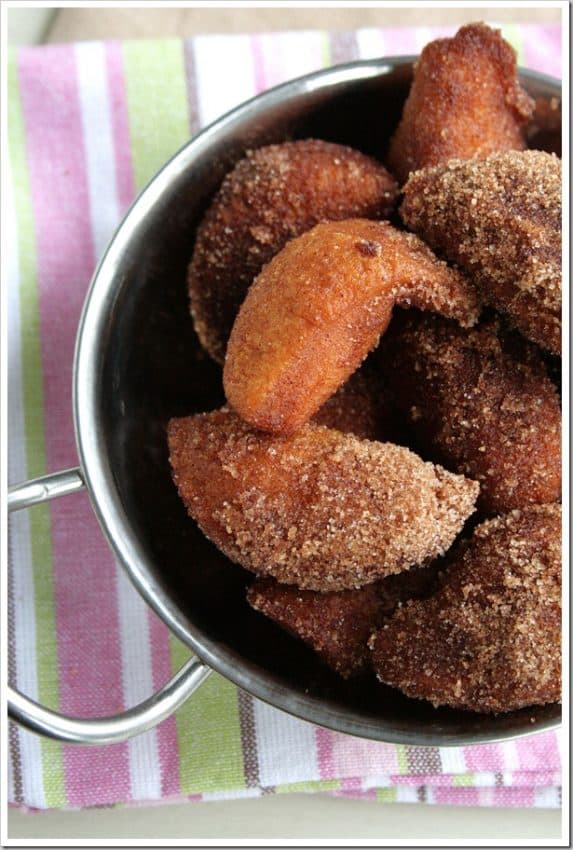 Hope you are having a great week so far!