Pickled Onion & Sriracha Deviled Eggs–Inspired by The River and Rail

I am from the south. I am. Ask me in person, and I imagine my (understated) drawl will clue you in to that fact.

And yet, up until a couple of weeks ago, I had never eaten a deviled egg. 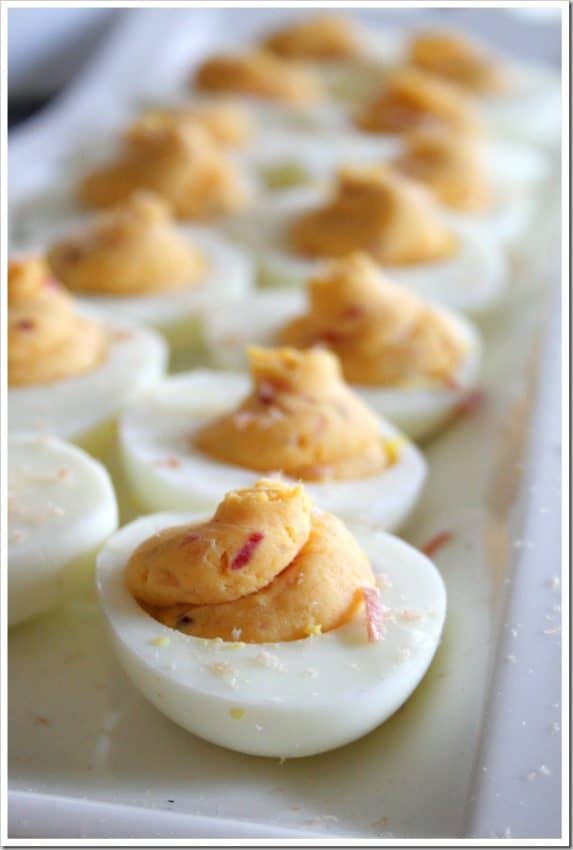 Yolks frighten me. I’ll eat a hard boiled egg – if I remove the yellow. I’ll eat cooked eggs – if scrambled. A sunny side up or over easy or any other egg where the yellow and white are distinct? I shall not consume it.

I am an enigma.

But, in mid-August we got away for the weekend to Roanoke, and at Brandi’s recommendation, we booked a table at the recently opened River and Rail Restaurant on Crystal Spring Avenue. Quaint, hip, and very relaxed, the River and Rail is a gem in this small city, and we are lucky to have Chef Aaron Deal at our disposal. Deal has garnered wide acclaim for his inventive approach to cooking, including being named a “Best New Chef Under 30″ by Chicago Social magazine, and nominated a semi-finalist in the Rising Star category of the James Beard Awards in 2009. Deal was also named one of Restaurant-Hospitality magazine’s “12 to watch in 2012.”

Cute, too. He came out to our table to say hello, so I can attest to that. Definitely cute. 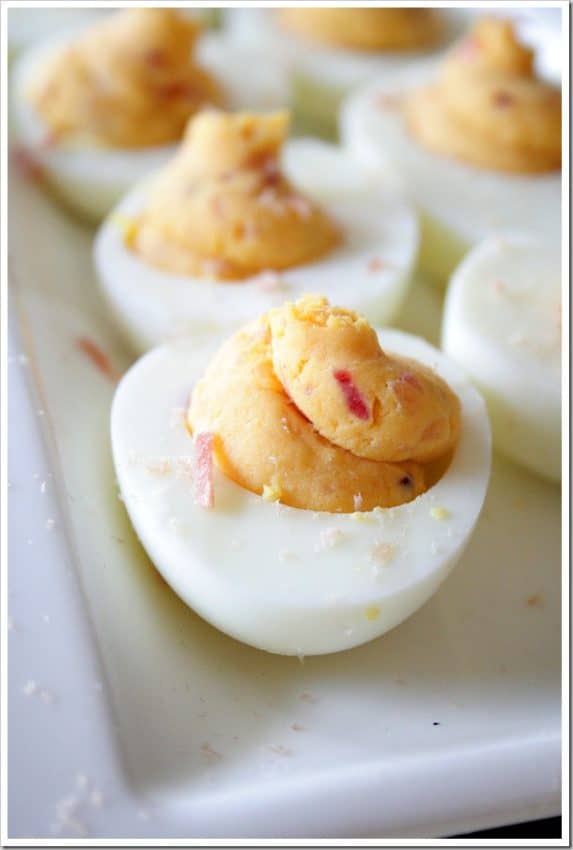 One of the items on the menu was Deviled Farm Eggs. Brandi and Nick were pretty certain this was something we needed to try, but at $2 per egg, we were all curious as to HOW good a $2 egg should be. It’s an egg, after all.

A few moments later, we got our answer.

It’s worth every penny.

Now, Chef Deal assured me we would have the recipe, and even tweeted back and forth with me a few times. But the recipe? I am still waiting for it. I did find a site online that supposedly offered his recipe, and man, was I ever excited. So, one afternoon I boiled the eggs, made the pickled onions, peeled, halved, beat, piped. I knew the recipe seemed off, and yet, I did not deviate. Perhaps everything would work out in the end.

2 teaspoons of kosher salt in a dozen eggs is enough to kill a chicken. I knew this. If you google and find that recipe – keep on moving.

However, based on that fail, I took what I knew and went from there. Perhaps it isn’t Chef Deal’s exact recipe, but it is incredibly delicious and tastes very much the same! Smooth and whipped, a little spicy, and full of flavors not often found in your standard deviled eggs. No paprika, not too mayonnaise-y. Just full on good eating. I made a batch for my in-laws, and got lots of applause. Give them a try and let me know what you think! 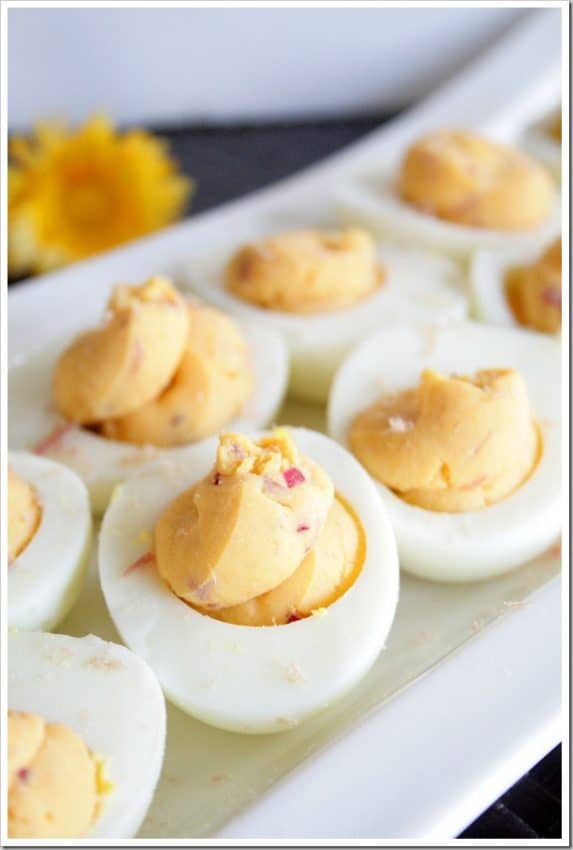 Next cut each egg in half and remove the yolk, placing yolks in a mixer bowl. Beat yolks until creamy. Add all remaining ingredients and mix thoroughly, about 5 minutes. Pipe into each egg.
Serve and enjoy!
Notes 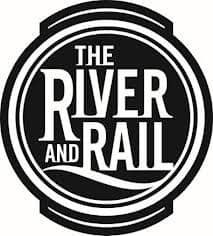 As for the rest of the meal at The River and Rail – it was superb. The pork belly was perfection, and don’t even get me started on the hanger steak. For dessert – we sampled a few! Favorites of the group had to be the Blueberry Hand Pies and the Banana Pudding. These you really have to try to understand! The Banana Pudding was more of a crème brulee, topped with cookie crumbs and a coconut jalapeno sorbet. Sweet Lord, it was incredible!

If you are ever in Roanoke for the day or evening (or you make a special weekend of it, like we did), definitely hit up the River and Rail. You won’t be sorry!

The River and Rail