I do not run. In fact, if there were really a zombie outbreak, and I had to outrun them, I’d likely die. Sure, I’d hide. And hopefully, zombies are pretty slow. I mean, they’re slow on TV, and they seem to have trouble with things like doors and fences…but what if that’s just TV? What if in reality, they are fast as hell and smarter than your physics professor?

That won’t bode well for me. Especially because I likely smell like cake.

But, that being said, I did participate in a 5k a couple of weekends ago. 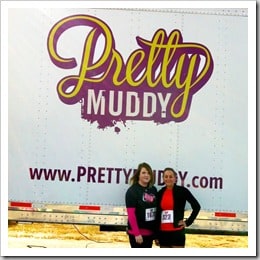 Not sure. But it started the day I got a notice from Living Social that there was a discounted ticket to run in the Pretty Muddy 5k in Richmond, VA. I don’t know if I was hormonal, sleep deprived, or just insane, but I decided on the spot to do it. I bought my ticket within the hour, and quickly convinced my sister-in-law to join me. She’s a skinny little broad, always running, and in better shape than just about anyone I know.

It’s maddening. Here I am, the fat girl, the baker, the duck confit eater…racing with a machine.

Thank God she got pregnant between buying the ticket and the actual race. Something needed to slow that woman down.

So, on a Friday we drove down to Richmond and tucked ourselves in for the night, trying to get a little rest before our slated 11am start time. I’ll be honest – I had no idea what to expect. But thanks to my crazy travel schedule, I managed to train a whopping 2 days for the 5k. You read that right…2 days. I used the Run, Zombies iPhone app, and you know what? The second time the zombies ate me. Imaginary zombies ATE ME.

Truth. I see all these Instagrams of the #RFR5k gals and they are all in way better shape than I am…so I knew death wasn’t far. If THOSE ladies get all red faced from a 5k, there was little hope of my survival…zombies or no.

Going back to expectations…I guess I imagined hard core runners. Dedicated athletes. Women running like mad. I did NOT expect half of them to be wearing tutus or skeleton costumes. I didn’t expect a party. I was relieved…because that’s exactly what happened. The Pretty Muddy 5k was a women only running party. Sure, there were some hard core ladies pushing through the race, but most everyone was just there, having a fun time, enjoying the obstacles and their friends. 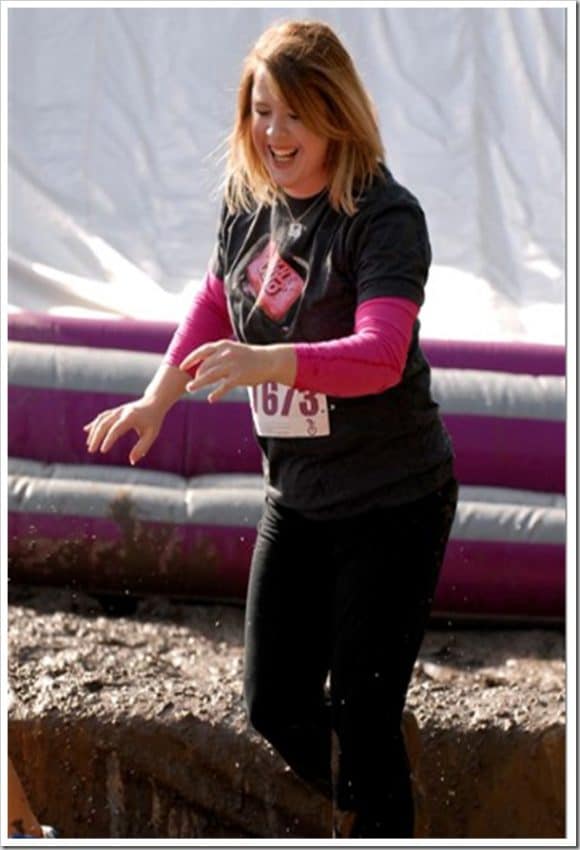 Speaking of obstacles – they were so much fun! Not only was the Pretty Muddy a 5k, it was outfitted with 11 muddy obstacles, from a waterslide with a giant mudpit at the bottom, to high fences to scale, to pipes to crawl through, rope walls to climb, and even a Bubble House. Once you entered that thing, you had no idea where you were or where you were going…it was wonderfully crazy!!

As my sister in law and I made our way through the course, we got to catch up on life, new babies, and gossip, which was awesome, and somewhere along the way, without really even noticing, we rounded a corner to find ourselves in earshot of the DJ at the finish line, pumping up our motivation. One last mud pit to go and we’d done it! 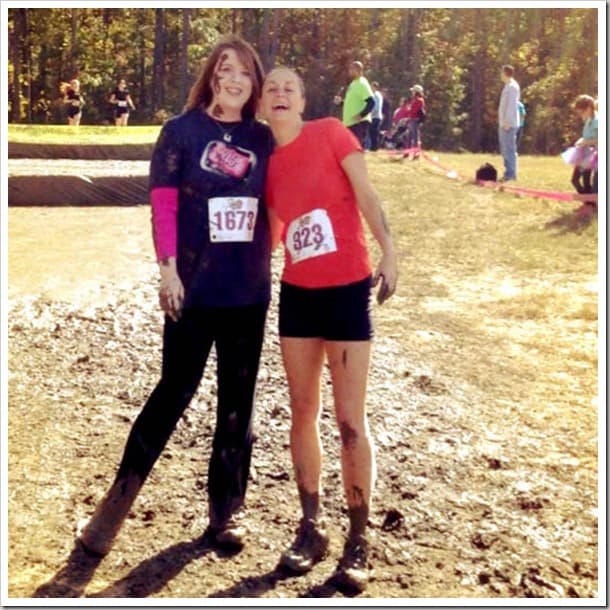 No one was there doling out prizes, in fact, no one was officially keeping time. We made our loop in 1 hour and 1 minute, thanks to the iPhone timer – and I am thrilled with that! Considering I expected death, to finish over 3 miles and 11 obstacles in an hour seems impossible!

Maybe even stranger than that? I ran again today…and no one made me.

I don’t even know what to think about that.

If you’ve EVER considered getting motivated to exercise, I highly suggest just doing it. You don’t need a Groupon – just sign up for something. If there’s a Pretty Muddy coming near you – DO IT. It was a game changer for me, and I would do another again in a heartbeat!

Now – have YOU run a Mud Run? Any you would like to suggest? How about a Zombie Run? I am so anxious to try one of those, though again, I know I’ll be eaten (Cake!). And another thing – I need shoe advice. I JUST bought a new pair of Asics, thinking that would help. Apparently I run on the outer edges of my feet, and it really hurts. I don’t have a problem with the running, it’s the pain it causes my calves and feet. Is it the shoes? Is it because I’m not a runner, and just not used to it? Is it too much cake? Really – I want it not to hurt, so that I stay committed to running. I want to love it – but it hurts!

PS – Thanks, Kiki!! I couldn’t have done it without you!