I don’t know about you, but last fall/winter/spring…heck, even the first part of the summer…I was congested. Like, a never-ending walking puddle of mucus.

There should be a special name for that, but snot in the head is pretty darned accurate.

Now, I could blame the bizarre weather patterns. The very mild, practically non-existent winter that lead straight into a whatever it was spring, and then a summer that was less hot than usual and full of wet wet rain.

But I can’t blame the weather. That’s just picking on Mother Nature, and I fear any repercussions of doing that. So, I blame my son Seven.

Rude? Maybe. But I was never this snotty before he went off to kindergarten last year where those little germ covered brats chew on each others crayons and pick friends noses and share gum and tissues. It’s just a festival of disease up in that rainbow covered asylum.

I think they each need their own antibac covered cubicle. Not kidding.

But sadly, I think that’s likely not going to happen, and I kid you not – after 4 measly days back in school – I have a snot head again. Or rather, I did. 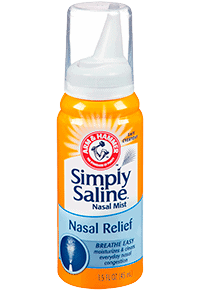 You see, I was a doubter, but I can’t take another year of drippy headed trances. So I resorted to actually USING a product I was asked to review. ARM & HAMMER™ Simply Saline™ was sitting, unopened, for 2 whole weeks in my laundry room cabinet, because around here, new stuff goes where new stuff fits. If it’s in the laundry room cabinet, so be it. Don’t judge, oh, ye of many shelves and closets…I don’t have them.

But like I was saying – I started feeling the funk on Tuesday. Whether it was the back to school germathon or something else, I felt it coming. So huh – I read the ARM & HAMMER™ Simply Saline™bottle, and gave it a go.

I do not like to stick stuff up my nose. I mean really…who does that?

Well, me, now. It’s misty, and gets the gunk (for lack of a better word) OUT. I feel better. Just…better. Yesssss.

Therefore, I will continue to stick this stuff up my nose any and every time I feel the slightest bit snotty. It works. It WORKS. And now, if you come to my house with a UPS package, a bill for gas, or a testament straight from the Lord, if I think you have the cooties, I will spray my nose right in front of you.

Because it works, and because I don’t know whose bandaids your kids having been eating, and I am not taking ANY chances.

Want a coupon? Grab it here!

Disclaimer: I am a paid spokesperson for Arm & Hammer. All thoughts and opinions are 100% my own. And yes, this story is true. Please don’t bring the cooties.