As a kid, I can’t say I was a huge fan. Bologna, bologna and cheese, PB&J – that’s really about as far as I went. Sure, a grilled cheese was good stuff, but everyone knows that. But as an adult…well, gourmet sandwiches became a love of mine.

I do not like wheat bread. Rye bread. Pumpernickel. You keep it, I ain’t eating it. I want white. Or a bagel. Pretzel. Foccacia. Italian. I want full on NOT good for you, so please, don’t offer me a brown bread sandwich.

And IF you are going to make me a sandwich, let’s fry it, okay? Or at least bake it. I like my sandwiches warm, my cheese melty, as cheese SHOULD be. Are you with me? 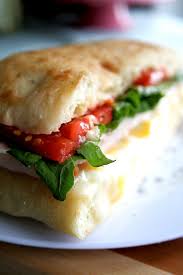 I made these ciabbata sandwiches the other evening, and let me tell you, THIS is a good sandwich. I piled on fresh mozzarella, roasted turkey, crisp bacon and baked ham. We used the last of the San Marzano tomatoes, and a handful of zesty arugula from the garden. I drizzled on a bit of champagne vinegar and extra virgin olive oil. And the best idea? I made a compound butter to coat the inside of this masterpiece.

You may recall the Pumpkin Orange Vanilla Bean Butter I made a couple of weeks ago, using the new butter from Kerrygold. I’ll be up front with you, I was hesitant to use their new “Reduced Fat” version of butter, as we all know “reduced fat” means “added something else”. Probably something gross. But after reading that this Kerrygold is naturally less fat, due to the season the cows are milked, well, I took one for the team and gave it a shot. Besides, I was out of every other kind of butter.

Kerrygold challenged a few bloggers to come up with recipes to doll up their new butters, and I just have to share this one. It took our sandwiches over the top, and keeping it to myself would be a crime. Dubliner Cheese, Sea Salt & Pesto joined forces with my Kerrygold butter to create one honey of a sandwich. It would also be great in potatoes (ooh, a baked potato) or mixed in to some mac and cheese. You could also slap it on a grilled cheese and probably die of delight.

Combine all ingredients, use as desired.