Leg One, Day 17…Getting Lost in the Souks

Today we managed to wake up a little earlier…jetlag seems to have a way with me from time to time, but I did make it to breakfast downstairs. We were welcomed to a table in the courtyard, by the pool, and served coffee and tea, bread, and Moroccan pancakes. I’ll tell you in a few days if I really am a fan of these strange little pancakes, because we were both so starved this morning that I cannot rightfully say if they were great or not. Nevertheless, we ate them all. 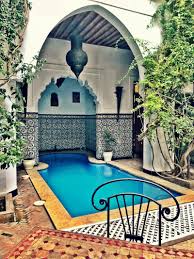 After breakfast we spent a little time on our rooftop, which is a huge area with hidden alcoves, open air gardens, and views across the medina. Despite the hot temperatures, the covered relaxation area is, well, very relaxing. No one seems to spend much time up there, so it was quiet, and we were both able to get a little work done.

Later this afternoon, we set out again towards the Jemaa el Fna, the main square we told you about yesterday. This time, however, we opted to take a new route – one that would take us past a fanciful rug shop Rusty had found online and thought I may want to visit. We planned it out in advance, even screenshotting the map we needed. It was about a mile or so away from our Riad, and didn’t look to0 complicated to reach.

However, thanks to some construction, and, thanks to Chris Hemsworth and the crew filming a new Men In Black movie, we stumbled into a “roadblock” of sorts that held us up a bit. How we managed to wander straight onto a movie set in the middle of a myriad of souks I have no idea, but we did. And no, we did not see Chris. In fact, until we got back to our room, I had no idea he was even in town filming, as the Moroccan teenager that informed us of the movie had said it was Will Smith. 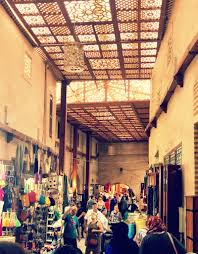 We never did make it to the rug shop, although we passed many others. The streets are not what any American would call a STREET, as they are narrow, cobbled, and really, if you are driving a car on them I doubt you would actually make it 100 feet. So narrow, so packed full of pedestrians and shops and street vendors and zipping motorbikes…it’s nuts, to say the least.

(Note the photo above…THIS is considered a street. Motorbikes and cars do attempt these passageways!) Having a map is a joke, or, our map is anyway. Instead of being too worried about it, we meandered in and out of the maze of souks, knowing eventually, we would either find a taxi or stumble headfirst into the main square. We didn’t really care which happened.

Along our path we bought a couple of little trinkets, and managed NOT to buy any spices. 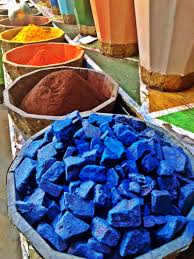 I cannot describe to you how many spice vendors there are. Hundreds and hundreds. And all have giant vats of aromatic and gloriously colored spices. Saffron sits uncovered in piled high baskets, alongside cumin and curry and mint. The smell in the spice souk is overwhelming and breathtaking… it feels as if tiny bits of tarragon are clinging inside your nose. You even begin to wonder if you will make it out and find true oxygen. 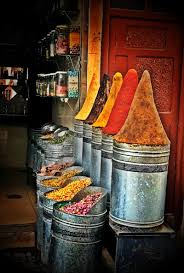 But then you do.

The darkness of the souks open and we find ourselves in a square unfamiliar, the skies have become deep orange and violet, with streaks of lightning every few moments splitting the clouds. No one seems worried – it is a few miles away, and you can see the ropes of falling rain in the distance making no effort to come any closer. We chose a lane to follow blindly into another series of shops, this time more leather goods than spices. It never feels scary, like being lost in New York City or LA may, it seems only a mild inconvenience as you are hungry and want to find the square and the dinner you’ve waited all day for. 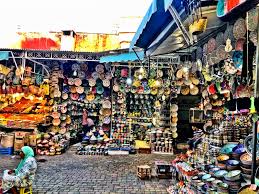 Finally, after nearly 4 miles of walking through these labyrinths of Marrakech, we found ourselves exactly where we hoped to be.

We chose an open air vendor that had approached us the night before, and opted for a mixed skewer of meats and vegetables. By Thailand prices, this area is not inexpensive – our dinner was just over $20 all inclusive of tax and tip. Not horrible, but, not great. And, both of us agree…with SO many spices to be had, why are the cooks not using it? The food is good, though a bit overcooked, and honestly, a tad bland. Maybe they do this because we are tourists? Whatever the reason, we are not likely to eat at this particular vendor again, but that’s okay…there are hundreds of others. 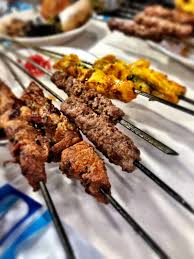 I told you yesterday about the sounds of the market, but I wanted you to hear it for yourself…so I made a quick little video for you. I made it overlapping and a bit scattered on purpose – when you are here, it is impossible to focus on any one thing, as every sense is being assaulted. The sounds you hear? It is from the market, being played by the snake charmers, not canned music! Hopefully it will help you have the same feeling as we do, so that maybe you can experience it a bit for yourself.

What do you think?