Leg One, Day 18…Our Home in Marrakech

The Riad Elsagaya is our home here in Marrakech…I’m letting Rusty introduce you to it while I take the day off! 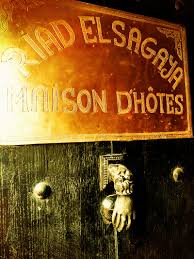 Marrakech. You’ve seen the snake charmers and the dancers, the spices and the trinkets, but then? After a bustling day and night at the main square, with sights, sounds, and smells coming from every direction, we retreat. We retreat from the monkeys and small children that are trained to steal, and scurry along our path, caramel gelato in hand, to our riad. A chalk colored cat crosses our pathway as we near the last turn in this labyrinth of a journey, and there it is. Riad Elsagaya. Our home for the next thirty-some days. Door opened. And closed. Sigh. We survived, but just barely. Like when we were kids playing neighborhood hide-and-seek, the riad is home-base and we somehow darted past the seeker and touched base, one of Grandma’s welcome mats that we would later get scolded for using, just in time. Unlike her welcome mat, our home base in Marrakech, our riad, is an oasis. Tranquility and calmness are guarded by her gates, and we are now inside. 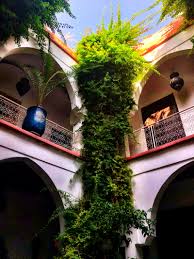 Riad Elsagaya is well situated on the edge of the medina, just inside the city walls. Jemaa el Fna square, the main square, is 15 minutes away by foot, unless of course you get lost in the souks! Our initial arrival was superb. We were met by the Guardian and the most delicious mint tea anyone has ever had. We sat and chatted in the atrium of a lobby. Above us, the serenity of a clear sky, as there is no ceiling, only walls that seem to reach the heavens. Beside us, a pool of calm. The blue water is so soft it has a milky sheen to it. Greenery and Moroccan tiles surround us, the surroundings engulf us into the most tranquil state. 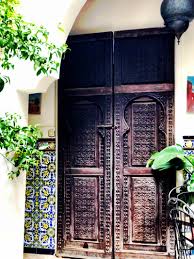 The Guardian shows us to our room after standard check-in procedures. I was surprised, and not in the greatest of ways. I expected something a little bigger, with some space to work, and relax. Our room is just that, a room. It’s smaller than our tiny studio in Thailand, much smaller. We have a queen bed and a small armoire for our clothes. 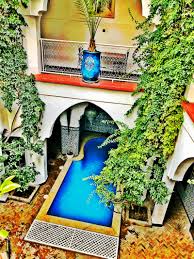 Connected to our bedroom is the bathroom. It is strange. At first glance, it’s rather neat. A cave-like shower resides at the far end, or does it? With a closer look, the entire bathroom seems to be carved from one piece of alabaster. The floor oozes to the shower’s edge and meanders up the wall, all the same color, all the same rock. At first thought, it’s cool, but then you use it. The smooth, perpetual round surface provides no place for soap or shampoo, as they just slide down the parabola onto the plane that is the floor. Water does the same. We improvised. An ill-shaped shower isn’t going to stop us! 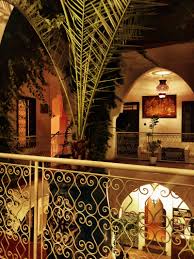 Breakfast is included and is served pool side, in the atrium below the morning sky. It’s simple but tasty. Coffee, orange juice, French bread and Moroccan pancakes are served. What is a Moroccan pancake? Well, they aren’t American pancakes or Dutch pancakes, that’s for sure. At first bite, I thought, “fried cornbread?” But it’s not. More like a fried dough that has not much fluff to it. The traditional name is msemmen, I call them Moroccan pancakes. The jam that is served goes great with whatever-dough-this-is, and I roll it like a fruit roll up! Simple and tasty, and good enough to start the day. And now we are ready to do it all again. We are ready to be lost amidst the mountains of saffron, paprika, and blue magic. The spice markets and souks will dump us onto the Jemma el Fna, where monkeys and children are trained to rob, charmers to dazzle, and merchants to hustle, but we will elude them all. We will reach our home base and escape into the arms of our oasis—Elsagaya.

Spread the love
Leg One, Day 17…Getting Lost in the Souks Week One Recap…Marrakech