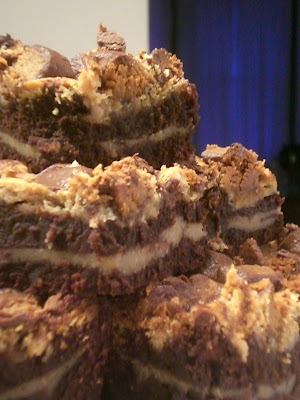 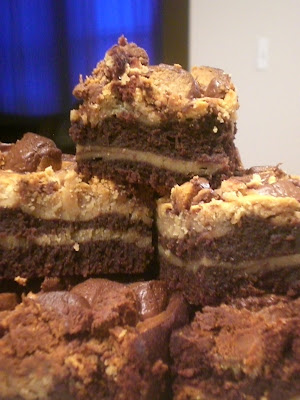 Okay, so I went ahead this morning and made the “Double Peanut Butter Cheesecake Swirl Brownies.” Let me begin by saying I knew that this wasn’t going to be good. Today, for that matter, just wasn’t a good day for being in the kitchen. Seven woke up with a sore butt and a snotty nose, and instead of napping while I made brownies, he insisted on being held, or sang to, or taken outside to dance. This behavior interferes with successful brownie making. First off, I was out of aluminum foil, with which I was supposed to line my pan. So that was a setback. Second, in all the dancing and singing and sneezing fuss, I used a whole brick of cream cheese instead of half. I realized this mistake only AFTER the brownies were in the oven. Third, I pulled the brownies at 30 minutes and added the Reese Cup topping, even though deep down I knew that I was gonna take more than 5 minutes for that concoction to set up. That means the Reeses baked not for 5 minutes, but more like, oh, 20. To make matters even worse, we were trying to leave to go to Mom’s for lunch, and the damned things were just eating up the clock. So at a total bake time of 50 minutes, I said hell with it, switched the oven off and left. Yep, left them in there.
When I got home I was anxious to see if they miraculously ended up tasting good. Well, they LOOKED good. I cut them up and arranged them pretty like on a plate and took their picture. Only then did I dare to taste them. Umm, not so good. If you scrape the over cooked Reese top(though not burned but still taste burned) then it’s just okay. Kind of wet-cake like, to quote Jon. I don’t think I even feel comfortable giving them away. That hurts, too, because this was an expensive recipe. I doubt I try it again, unless by some stroke I do decide that peanut butter is good. Well, here is a look at the brownies. Pretty little things, but such a disappointment. In case you want the recipe, here it is…maybe you will have better luck.
Double Peanut Butter Cheesecake Swirled Brownies
from Blonde Ambition in the Kitchen
3/4 cup butter, very soft (not melted but softer than room temp)
1 cup sugar
1 TBS vanilla extract
2 large eggs1 oz. unsweetened baking chocolate, melted
1 oz. semi-sweet baking chocolate, melted
1/2 cup all purpose flour
1/2 cup cocoa powder
1/4 tsp baking powder
1/4 tsp salt
Peanut Butter Cheesecake Swirl
4 oz cream cheese, softened
1/2 cups creamy PB
1/3 cup sugar
1 egg
1 tsp vanilla
5-6 Reese’s peanut butter cups (regular size) cut into 6-8 pieces each
IMPORTANT: Do NOT omit the Reese’s Peanut Butter cups. They take these brownies over the top and add the “Double” Peanut Butter taste the title tepts tastebuds with
Preheat oven to 350. Line an 8×8″ square pan with foil and lightly coat with PAM cooking spray.
In a microwave safe bowl melt the two baking chocolate squares in 30 second intervals stirring after each interval until smooth and melted after stirring. Do not scortch! Remove from microwave and allow to come to room temperature.
In a large mixing bowl, Beat together butter and sugar until combined. Beat in eggs one at a time until blended. Add vanilla and melted chocolate. Mix to combine. Combine dry ingredients in medium bowl and wisk together. Gradually stir dry ingredients into butter mixture. Do not overmix.
In separate mixing bowl, beat together cream cheese, peanut butter sugar and vanilla until smooth. Add egg and beat until just combined.
Spread about 2/3 of chocolate brownie batter into prepared pan. Evenly drop 1/2 of cheesecake batter in dollups over brownie batter. Run a knife through both mixtures to slightly swirl.
Dollop remaining brownie batter and cheesecake batter over swirled mixture. Run knife through the browine and cheesecake dollups (not all the way through the already swirled layer) to create a swirled pattern.
Bake for 40-45 minutes**, or until center is set and a toothpick inserted in the center has a few crumbs stuck to it. Do not overbake or they will harden, if underbaked they will be too gooey. Every oven is different so watch and check these after about 35-40 minutes of baking to ensure propper doneness.
**After about 35-40 minutes of baking (with about 5-7 minutes of baking time left, you just need to eyeball it) gently place cut up Reese’s cups over top of almost fully baked brownies. Finish baking until a toothpick inserted in the center has a few crumbs stuck to it. The Reese’s PB cups will melt but hold their shape slightly. Cool completely on wire rack before cutting and serving.
NOTE: I have not baked the brownie recipe without the Double Peanut Butter Cheesecake Swirl and Reese’s on top so I am not sure how the brownies themselves rate. Let’s just say I may not find out as I am in love with the Double Peanut Butter Cheesecake recipe.
NOTE 2/13/08: I changed and added 5-7 minutes the baking time as a few people who have made the recipe indicated a longer bake time was needed than oringinally posted. The recipe listed above reflects those changes.All ovens are different so be sure to keep an eye on your brownies to prevent overbaking. Brownies are done when a toothpick inserted in center comes out with a few crumbs stuck to it. 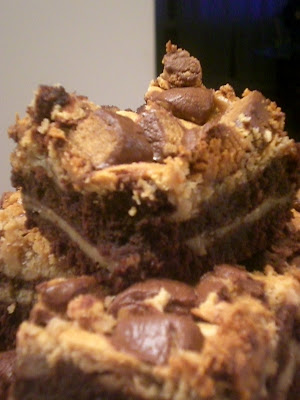