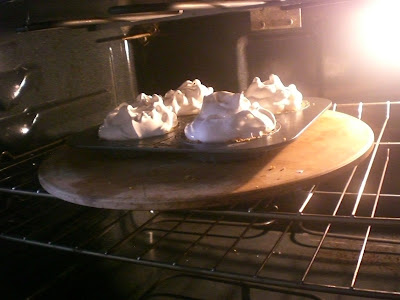 I have been in the kitchen more today than I think i have been in there since we’ve lived here. No joke. If it wasn’t nailed down today, I baked it, fried it or nuked it.
First off, i made my Tuesdays With Dorie recipe, which as everyone knows, I can’t post until (duh) Tuesday. I started it last night, but due to some freezing/chilling times, I couldn’t finish it until this morning. So that’s done. After that, I immediately decided there was no way I could let the left over key limes from this week’sDorie challenge go to waste, so I used my new tarlette pan and made 4 little Key Lime pies. 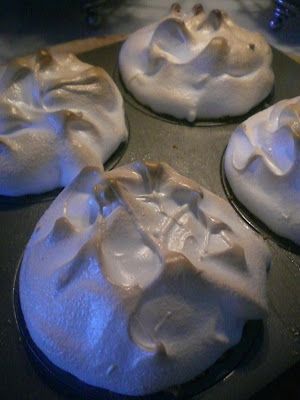 Not enough baking?? So I work on my cupcake ideas for this months “Cupcake Hero” challenge, which this months ingredient is cocoa powder. Easy enough. I just wanted to test out how the mixing of two cake batters would turn out visually. Any ideas on how I can get nice, even lines? Would freezing the batter before adding a second flavor, then allowing it to thaw work? I don’t want to say what exactly my recipe IS, (hello, it’s a challenge) but let me just say that even-ish layers would be great and really make it cool. So help me out – is there a secret? For my trial run I decided on what I am calling “Chocolate Covered Strawberry” Cuppys – a bottom layer of strawberry topped by – you guessed it – chocolate. While they look neat, and taste GREAT, they aren’t the uniform layers I was going for. 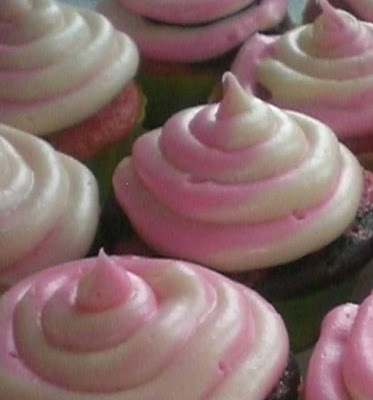 The icing I made was cream cheese, and thanks to some time spent looking at CB’s work on iheartcuppycakes, I felt brave enough to not only pipe on my frosting, but to tint half of it as well for a more unique effect. Not too bad for my first attempt – so I will try it again and hopefully get better! For those of you who haven’t already checked her out, CB is a very talented cupcake baker – very original! Plus, she’s been very thoughtful and supportive to me in my quest to become as cupcake oriented as she is! 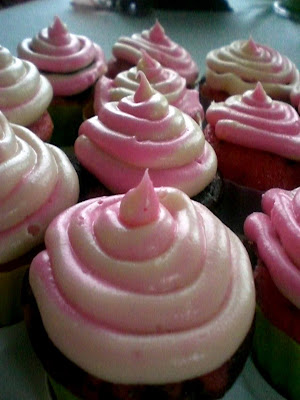 Because I had a bit of batter left over from the cupcakes, i made a little cake with the leftovers and then tried to copy bakerella and make some of her little cupcakes on a stick. They are currently cooling in the fridge, and I will take that on tomorrow morning before the in-laws arrive for the weekend.

Lastly, when the husband said – Gee, I appreciate you hanging out in the kitchen and being like, happy and stuff, but could you maybe join a group that makes dinner instead of dessert? – I figured maybe I should make something dinner worthy. What to do? Well, I had some gnocchi dough still in the freezer from when I made a huge batch a few weeks ago, and suprisingly, it thawed nicely and I was able to roll it in some flour and voila – gnocchi in a few minutes. I added some chicken to a fry pan, cooked it up with some spices and alfredo sauce, added some peas, poured in the cooked gnocchi, and dinner was served. Hooray. One more step towards domesticity. I just hope the husband doesn’t get used to it.