Tuesdays With Dorie…The Cake That Got Her Fired 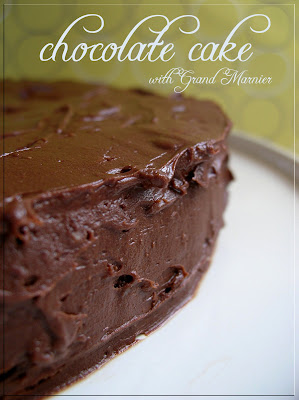 This week Lyb of And then I do the dishes chose Chocolate Armagnac Cake – aka The Cake That Got Me Fired on pages 279-281 for our Tuesdays With Dorie baking extravaganza.
I’m just gonna go ahead and say it now…I almost bailed here. Why, you ask??
Prunes.
Dear God…Surely. You. Jest.
Why in the sam hell would you want to put a prune in a perfectly good chocolate cake?
And – what the snot is Amagnac? I don’t even know how to pronounce it. If I had to pronounce it, I would imagine it to be the same noise that you make when you are trying to get rid of that last bit of snottage in the back of your throat during flu season. Just guessing.
Alright, alright. Dorie used prunes in this cake and… what? She got fired. So what was supposed to be in the cake? Raisins.
Just shoot me now.
You really, really shouldn’t cook a raisin. Hasn’t it been through enough already? I mean, come on. 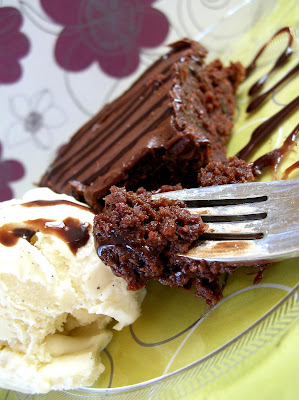 So what to do? Bail? Uh-uh.
Substitute. Creative insubordination, as Dorie herself would say.

And so all went well on this cake.

I used Craisins. Chopped up into the teeniest little pieces I could make. And I soaked them in a little Grand Marnier, because that’s what I had. I also used almonds instead of walnuts or pecans, because, well, it was “All Day Pajama Day” and Momma doesn’t get dressed to go to the store for nuts on All Day Pajama Day. Or for anything, for that matter. Substituting is fun. 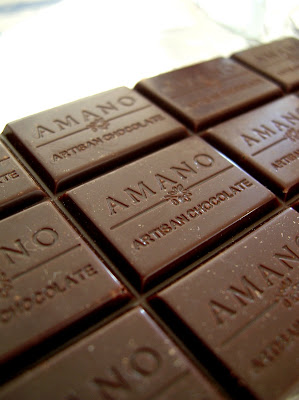 Now, you’ll see a pretty picture above of chocolate. Amano Chocolate. A little while back, Blake had a faboo giveaway from Amano, and I recieved 2 ounces of this super silky dark chocolate. It’s from Bali, people. I’ve been there, and it was gorgeous. As for the chocolate, well, it’s bitter, but without the bite of the cheap stuff. Really good chocolate. I had been saving it for just this type of occasion. For the rest of the 7 ounces of chocolate I used Ghiradelli, which is my usual fancy chocolate, as I am pretty poor these days and anything pricier than Hershey’s is fancy.
I was having the feeling that this cake and its two sinks of dirty dishes was going to be quite identical to the Daring Bakers cake I just did, but it was in fact a bit different.
As I mentioned, this cake came together without too much trouble – just lots of dishes which I find irritating – but it did what it was supposed to do. I did have a bit of a fit out of the icing as the edges of the cake were tempermental and wanted to crack. The icing did a nice job of hiding the imperfections, though. 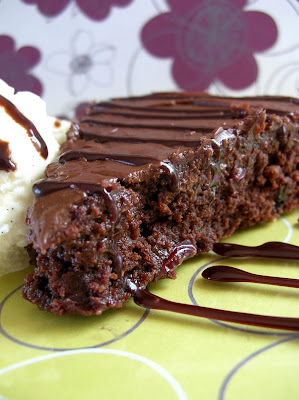 Tastewise this was a very good, very rich, fudgy cake. I have to admit that I kind of liked the chewiness of the chopped up craisins, though I would prefer you didn’t repeat that. This cake does call out for ice cream…it’s so rich. Don’t attempt to swallow it plain. Do I prefer it to the Daring Bakers Valentino? Umm, no…but not because of the taste. It’s because of the involvement. Chopping the craisins. Flaming them. The alcohol. The ground nuts. The icing. So many things to have to do.
But I did them, and that’s what counts.
And you know what? So did the rest of the TWD gang. Go check them out here. They are mighty creative.
If you don’t already own a copy – pick up a copy of our Bible – Baking:From My Home To Yours here. You won’t be sorry.

Spread the love
What I Have Gained As a Blogger… Pasta Machines. I Need Advice.