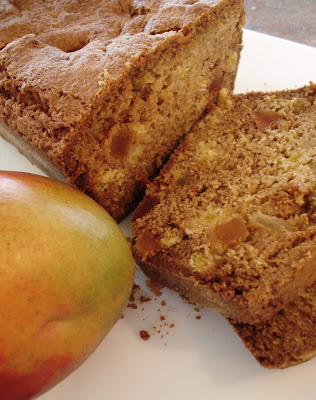 As I write this post, the ocean is crashing outside my door, waves lapping the dunes at high tide. It is 10:30pm on Monday night, a loaf od mango bread baking away in my rented kitchen oven. My husband and my Dad are in front of me in the great room, watching back to back episodes of Axe Men, which must be a guy thing, as it’s pretty much just a bunch of big trees and bleeped out expletives with a narrator that I think is trying to take over the voice world that Mike Rowe hasn’t already conquered. (Good luck to you, mister, Mike is everywhere.) But what’s the deal with this show? Ropes, trees, trucks, bleeping bleepity bleep dammityou’refired. Over and over. Whatever. Back to the bread.
Oh yeah, did I mention I am at the beach? The beach. Corolla, North Carolina to be more precise. I really didn’t have any intention of making this weeks Tuesdays With Dorie Mango Bread, chosen by Kelly of Baking With the Boys, but since the weather here has been icky, I decided to give it a go anyway. Not a smart move in the wallet department, as I had to buy every.single.ingredient. Mangoes. Sugar, Flour. Eggs. Ginger. Brown Sugar. All of it. This loaf of bread cost me an estimated $31. Whoa. At least I get to take the remaining ingredients home in a few days, right?
The Harris Teeter is 14 minutes away. Seven and I drove down earlier this evening to pick up the neccessities for the bread, after Sue emailed me a scanned copy of the recipe- and a couple of others Tweeted me the online version (thanks Kayte, Dianne & Cathy) so that I could make it. Sadly, I did forget the cinnamon. So no cinnamon in my bread. I like it all right, cinnamon, but I doubt I really miss it. It isn’t my favorite of all the spices. And raisins? Ahem. We all know how Susan feels about cooking raisins. So I subbed in some dried Tropical Fruits. Pineapple, Papaya, Coconut. I hope it works out.
I’ll be honest and admit this to you now…I have never eaten or even tasted a Mango. I’ve had a Mango flavored Starburst, if that counts, but something tells me it doesn’t. I wasn’t even sure what to expect after peeling it. It’s weird ya’ll. The hard white thing in it? Can’t it just be in one place? Why must it stretch all the way through haphazardly? And why must the meat of the fruit hang on to it so tightly? And why does it smell like a fruity Christmas Tree? It was messssy. I don’t think I like mangoes. Pretty color, yes, but I can’t say we are going to be BFFs or anything in the near future. Just guessing. Of course, I have yet to taste the bread, so keep reading. I may change my mind by the end of the post. So back to vacation talk. 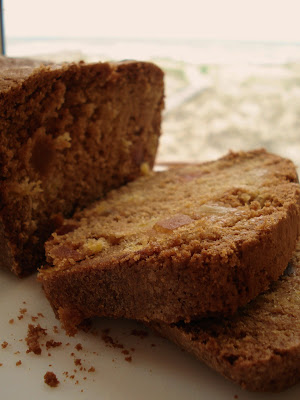 Okay…now it is morning. I took the bread out early last night – after 72 minutes. It seemed done. And it was. I would have ruined it had I left it in there for 90. That would have sucked. So as you can see, I took a couple of pictures…and then I ate a piece of the bread.

Not half bad. I don’t think I would have liked the cinnamon addition, so I’m glad it was accidentally omitted. Nice, fruity – not too much ginger, like I was afraid of. Just pleasant. The dried fruits I added instead of raisins are good – I was afraid they might ruin it, but it’s good.
Now I’m gonna see if I can’t find a sucker to play Scrabble with me. Or prepare for my life as the wife of a logger in Oregon. Whichever.
Have a great week!

Spread the love
more
more
Will There Be Wireless with my Peace? DoughMessTiCatered