Have you ever spent an entire day cleaning your house, decorating it all jazzy for the Holidays, and then, at 11 that night thought – ya know, it sure is clean in here…I should go ahead and make a cheesecake.  Besides, Nip/Tuck is on again for the second time in 2 hours and this time I don’t have to pay attention to all of the boring surgery parts.

Okay, so maybe it’s just me. 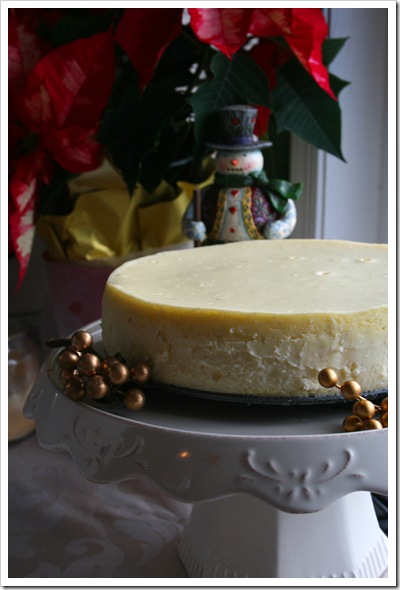 Yesterday was that day for me.  It started out like any other day…wake up around 8:30, feed the Boy, get us a little bit dressed (okay, this wasn’t the norm, we had to go pick up a friend from the service station and take him to work, and as of YET, I haven’t gone out in public in my jammies. Yet. So we got dressed about 6 hours earlier than usual. Don’t judge me.)  But I digress. Right. Normal day progressing, except it’s Christmas.  And unlike the plans I had to do all the decorating the day after Thanksgiving, none of it was done.  So I set about to remedy that.  Things were going along pretty smooth, too.  I put up the first three rows of the 9 foot Christmas tree Mom lent me (that’s another story in itself – we usually get a real tree, but this year in an effort to save cash I borrowed the one my parents kept in storage.)  It was at Row Three that I put Seven down for his nap and got the bright idea to start putting the little white lights on as I went, because hello? That would be smart.  So, I trudge to the attic and pull down all of the nicely put away lights from last year.  The ones that worked a mere 11 months ago.  And I plugged them in.

It went downhill from there.

Of the 8 sets of lights we had, 3 worked. Damn the lights! Seriously, I think the manufacturers intend for the lights to work but one season. Clever move, Light Makers. I appreciate that. So now, mid tree, I have to go to the Rite Aid to get more lights.  And Sev is sleeping.  Luckily, my 10 year old dog sitter was outside and I bribed her to sit in the kitchen and listen for him while I went the 2 blocks away to stock up on more lights.  Crisis averted, I was back with 3 more sets of lights in 5 minutes.  And the dog sitter went back to playing Barbie or whatever she does with her time.  I don’t think she has her own cell phone yet, so I assume it’s dolls or Ouija Boards or something along those lines.  What’s with kids that age having their own cell phones anyway?  Why would they need one?  Aren’t they always going to be with an adult?  I see 5 and 6 year olds with them all the time. All. The. Time. It’s insanity, folks.  Think back to when YOU were a kid.  Did YOU need a phone of your own?  How much time did you even spend on the house phone?  And aren’t these kids lucky that in this day and age there is unlimited long distance?  God help, I was one of those girls who always had a boyfriend in another school district which meant ridiculous phone bills. Sorry Mom and Dad.  And my first cellphone? I was 18 and in college. It had 50 minutes a month of calls, no free long distance. My how things have changed.

Back to the tree. Old lights go on, 9 more rows of limbs go on, all the new lights go on, and…whoops…I’m out of lights and have 3 more rows left.  I’d like to tell you I handled it well.  I would like to tell you I loaded the awakened Seven into the car and drove back to Rite Aid and got more.  But I didn’t.  The top quarter of my tree is lightless. I’d had it.  In fact, I’d had it in such a finite way that I attacked my other Christmas Tree (we have 3). Why?  Well, I leave the living room tree decorated year round. I just wrap it up in plastic and carry the little 5 foot baby to the basement and wait for it to be December again.  I had brought it up from the basement last week and set it up, and to my dismay, some of the lights no longer glowed. Oh well, I thought, it’s fine. No biggie.  But when I looked at it yesterday after the giant light debacle? None of the lights were lit. None. So, I calmly approached the tree. And I kicked the hell out of it.

The lights came back on. Lucky for them.

Cheesecake. Right. I decided I wanted cheesecake. And cheesecake was made.  At 11.  You should make it, too. This one is creamy and light, not chewy, not ricotta.  Just smooth and whippy and full of flavor.  Add to it anything you like – we just had ours with homemade caramel and chocolate ganache. Yum.  Oh yeah, I don’t dig crust. So I didn’t make one.  You can if you want – it’s your cake!

1. Preheat the oven to 350 F and grease or butter a 9-inch springform pan. Wrap the pan in heavy duty aluminum foil so that it is waterproof.

2. Place one 8-ounce package of the cream cheese, 1/2 cup of the sugar, and the cornstarch in a large bowl. Beat with an electric mixer on low speed until creamy, about 3 minutes, then beat in the remaining 3 packages of cream cheese.

3. Increase the mixer speed to high and beat in the remaining 1 1/4 cups of the sugar, then beat in the vanilla, salt, vanilla, sour cream and heavy cream. Blend in the eggs and the yolk, one at a time, beating the bating only until completely blended. Be careful not to overmix the batter.

4. Pour the batter into the prepared pan. Place the springform pan in a large shallow pan containing hot water that comes about halfway up the sides of the pan. Bake the cheesecake until the top is lightly browned, about 1 hour and 15 minutes.  Allow to cool in the oven with the door propped open.

5. Cover the cake with plastic wrap and refrigerate until it’s completely cold, at least 4 hours or overnight. Remove the sides of the springform pan.

There’s still time to get your name in the hat for the 90th Anniversary KitchenAid Mixer..so go enter! Contest ends at midnight Friday!  Good luck!