My husband Jon likes to cook. Not bake, mind you…Cook. He loves to grill, but now that grilling season is over, you can often find him in my kitchen (yes, I said MY kitchen) making Deer Chili, spaghetti or soup.  His recent kick is Potato Soup, and he’s becoming quite the little Tater Soup Gourmand. 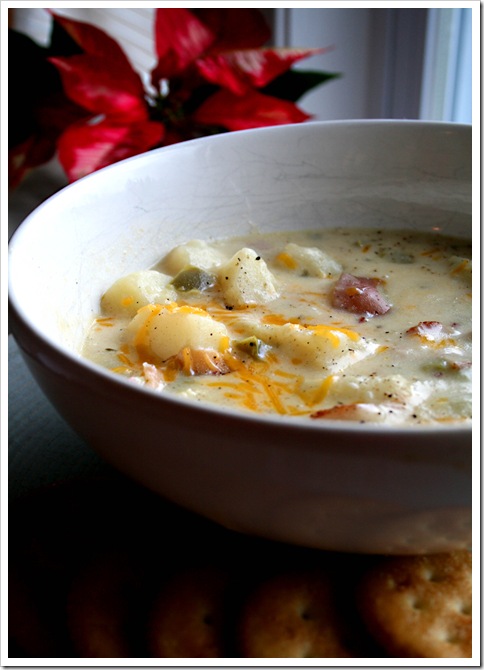 I came home from work the other day to find a huge pot of his latest creation ready to eat, which I have to admit, is really nice.  Not nice enough for me to have dinner on the table every evening when HE gets home, but really nice nonetheless.  So nice, in fact, that I took pictures of it. And am devoting an entire post Just. To. Him.

Oh, and guess what else I am devoting Just to Him?  A ticket.  To The Martha Show!  That’s right, Mr. & Mrs. DoughMessTic will be heading to New York for yet another Martha Show!  This time the theme is “Bloggers” – and I am beyond thrilled that I was chosen to attend! (Yes, even though I wrote that snarky post last time!)  I am mainly thrilled because I will have the opportunity to meet some of my favorite Twitter/Blogging pals – like Jennifer Perillo, Jennifer of Savor The Thyme,  &  Ashley of IceMilk Aprons (who, by the way, was kind enough to barter with me this Christmas!)  So, wow!  To be included in this round up is just…well, wow.  And I am taking Jon. And he’s a manly man. Not all that into Martha, I would say. Or twittering. Or, well, things that I do. But it’s around the time of our 10 year wedding anniversary, and New York is as good a place as any to celebrate, right? So, thanks Honey, for the soup. Yum.

PS…I get your swag. Just FYI. I will fight you for it.

1. Cook the bacon in a large frying pan until crispy. Remove the bacon and set it aside.

2. Drain the bacon grease but leave about a little in the frying pan.

3. Add the onions, garlic and bell pepper to the grease and sauté on medium high heat for about 4 minutes.

5. While sautéing, pour chicken stock, 2 cans of cream of chicken (and 2 cans of water)into a large pot and turn the heat on medium.

6. Add half of the cooked bacon, the rosemary,  & all of the sautéed ingredients to the stock pot.

7. Add 1 1/2 tsp hot sauce and potatoes to the stock and simmer for around an hour, stirring occasionally.

10. Add cheddar to soup if desired, garnish with remaining bacon.

Let me apologize for forgetting to make a little announcement. A WINNERS Announcement! I didn’t reveal the winner of the Muvee Reveal Giveaway!  According to Mr. RANDOM.org, our winner is #19 – and that looks like Bethie!  Bethie – get me your info, you won!!

Spread the love
Gingerbread cookies the most perfect cinnamon rolls