Leg One, Day 16…Arriving in Marrakech

After a long weekend visiting my sister and her family, and hanging out with Seven and my parents, we said goodbye to friends and family and boarded our flight east.

We left from Dulles International Airport, and things were rocky, to say the least, from minute one. As we had opted to fly Iceland Air, which I would now consider a cross between a regular airline and a budget carrier, we were told that our standard, always used and never identified as an issue carry-on bags were too large. Or rather, Rusty’s carry-on was too large, and mine was simply too heavy. He was a bit furious at me, as he was carrying my old bag (which took me all over the world without issue), and couldn’t believe that I hadn’t checked the size limit of the bags in the first place. 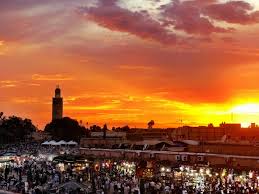 So we made it work.

A few doors down from the check in desk was a kiosk selling luggage. We bought a small duffle that SOMEHOW we managed to get his entire suitcase stuffed into, and we took a few books out of my suitcase and shoved them in my backpack. I full on knew my bag was still overweight, but screw it, I told the girl we were throwing away Rusty’s carry-on and that we were good to go. She didn’t bother weighing my bag or measuring anything else. I think she felt bad that we had to go through that.

But anyway, that was only the beginning.

As it turns out, it was pouring rain in Iceland, and our flight had been delayed by 45 minutes. Considering we only had a 90 minute layover to start with, and in Iceland, you have to go through customs even if you are not staying, making our connection to Paris looked highly unlikely. If we didn’t make it to Paris, we would be booked for the flight the next day. Yes, next day…which means our separate tickets to Marrakech from Paris would be useless. 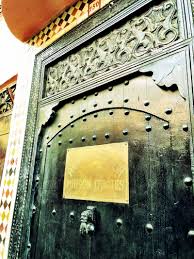 Somehow, the pilot was on a mission, and we arrived with EXACTLY enough time to get our passports stamped and run to the Paris gate. On time departure! We were shocked, and exhausted, but thrilled to make it.

We had a bit of a layover in Paris, which allowed us to have time to change terminals, go through customs again, and still have time to grab some food before our EasyJet flight to Marrakech. If you’ve never been to Europe, but intend to go, you should know about EasyJet and RyanAir, and a handful of other low cost carriers. Oftentimes, you will find specials where you only pay the tax on the flight. Yes, really. Even if you do have to pay a fare, it will be surprisingly low. Take for example our tickets to Morocco – they were only about $60 each. Our flights from Marrakech to Rome next month were even less – about $35 each. It’s hard to beat, and really opens up a world of possibilities if you want to see a lot of Europe, Asia, and even places in Africa, like 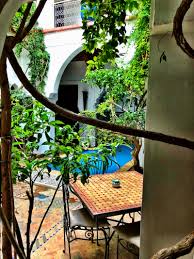 So yesterday we arrived unscathed in the Marrakech airport, which is very clean, well laid out, and modern. Going through customs (again!) was simple but the line was a bit long. We made our way outside and found our driver, who had a sign waiting for us, and we were promptly taken to our Riad in the medina.

The Medina is a walled fortress of a city, and is considered the “Old City”. Inside are riads and shops, souks, restaurants and cafes. The streets are narrow and busy, and full of activity. It’s loud and bustling at all times of day, especially in the evenings when the sun has set and the day starts to cool off.

We were walked to our Riad – the Riad el Sagaya, and checked in with a welcome of hot mint tea. I didn’t expect to like it, but with a bit of sugar, it really was fantastic. Our guardian led us to our room on the second floor, directly over the indoor/outdoor pool, and we settled in for the night. 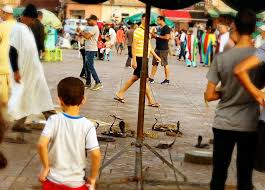 Today we slept in and rested, before venturing out to the main square. It’s roughly a mile or so there, and even though the maps are practically useless, we found our way. The square is full of EVERYTHING. Imagine what you think Morocco sounds like…is it full of snake charmer music? Drums? People shouting and laughing, music constantly playing? Then you are correct…it is all of this and more. The noise is a real life soundtrack to an unfilmed movie that you have found yourself an extra in. The snakes are laying out, uncaged, on the cobbled plaza stones. The charmers taunt them with kicks and drum beats. There is a man with a monkey running nearby that has gotten loose, his turbaned friends trying to help him corral it. There are children eating dripping ice creams, ladies in hajibs holding hands and ordering juices. It is sensory overload, with sounds and smells and colors so vibrant it is exhausting. 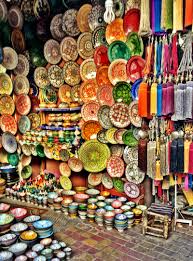 We each ordered a fresh fruit juice (about a dollar each) and meandered through the darkened alleyways of the souks. Each one offering fanciful lights, or piles of spices, dried fruits, ornate slippers. There is beautifully painted pottery, leather goods, dresses. There are so many things, and so much to see, it is overwhelming.

Back out in the square we wandered past the open air food vendors, but as the sun was soon to set, we opted to eat dinner on the balcony of a hotel. From there we could see the entire area, and the sunset was perhaps one of the best I’ve ever witnessed. We could watch the old men playing their strange instruments, we could see the tower in the background. We could watch the horses and carriages sweep tourists down the tiny roads. It was exactly everything I could hope for. 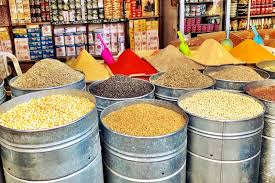 We made it back to the riad without any trouble, despite the darkness, despite the bad map, and have decided to settle in for the night.

Who knows what new things tomorrow may bring?

Spread the love
Financial Freedom…How We Did It Leg One, Day 17…Getting Lost in the Souks