Camel Trek in the Sahara 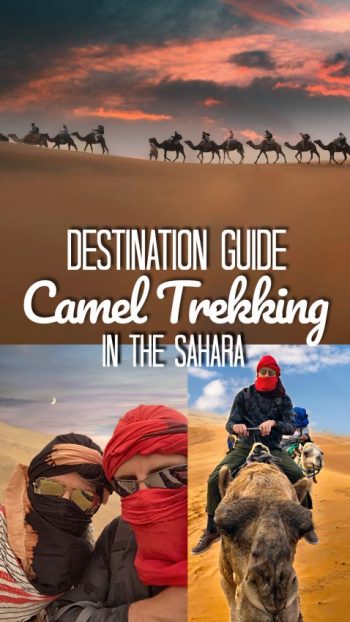 In case you follow along on Facebook or Instagram, you know by now that Rusty and I took a camel trek in the Sahara for three days. It was an incredible experience, one that both of us are humbled and thankful that we got to have.

But let’s be honest.

While we ARE THANKFUL, and VERY HAPPY WE DID IT, the “3 Day Safari to Merzouga from Marrakech,” (aka, the Camel Trek in the Sahara, that we carefully chose online is, in fact, a 3 Day Hostage Situation.

We paid to be taken hostage. 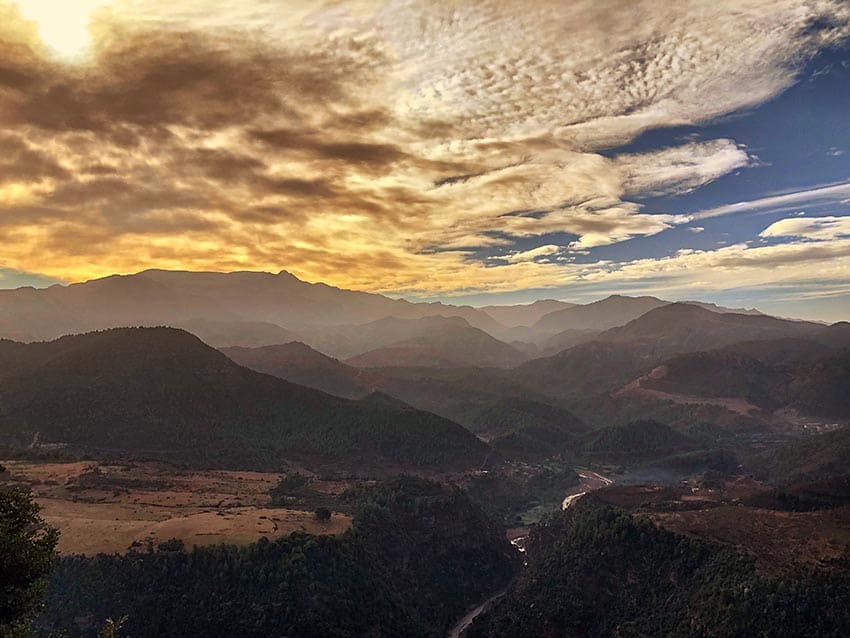 Also trapped in our crisis were two young Italians, and a family of four Canadien-Indians. (Like India Indians, in case you were wondering). None of us knew what we had really signed up for… We all just handed over $90 each, and showed up outside our Riads at 7:20am to be picked up and ushered to the desert for a camel trek.

I’ve seen a map of Morocco. I mean, I glanced at it a few times, even. It’s probably only about 300 miles across, and Marrakech sits in the middle-ish. How far can it really be to the desert? Not FAR, right?

After 2 hours of riding riding riding in our quite lovely minivan (not being facetious, the van was new and nice, though terribly uncomfortable thanks to zero armrests and no way to recline the seats even a tiny, tiny, please God just a little bit)- we pulled over on the top of a mountain to take pictures of the view.

We were somewhere in the Middle Atlas, weaving and winding on a road that would never be allowed in America, as guard rails were few and far between, it was under construction, and there are no rules at all about passing other than honk your horn and hope for the best. 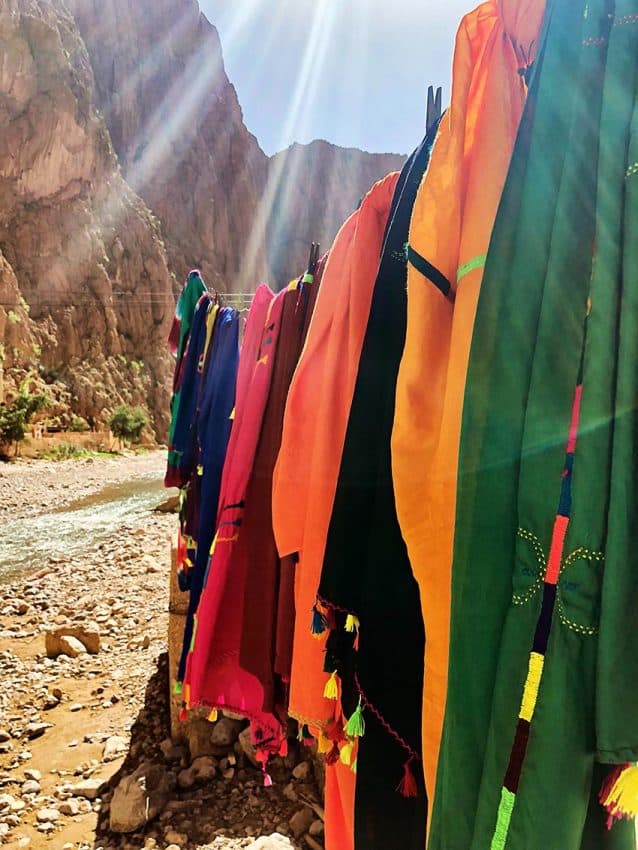 “Go With God” became our motto from the back of that van, and we probably could have all sang kumbaya, but instead we learned all the words to every Backstreet Boys hit and all the lyrics to Despacito in three different languages. Our driver had a playlist on repeat…and Susan is now fluent in Despacito.

After that photo op stop, we stopped for half a dozen more between that one and noon. Over four hours in hostage mode and we arrived at Ait Ben Haddou, an ancient village most everyone knows of but doesn’t know they know. It’s the stone city you see in Indiana Jones. In Gladiator. In numerous other films. It’s amazing to see, from a distance. But as part of our hostage negotiations, we were first lured into paying tweenagers on the side of the river to help us cross it, on sandbags, despite there being a perfectly new bridge just down the way, and despite there being nothing at all inside this village, because now it’s only a movie set and a tourist attraction. But we HAD TO GO, and had to pay an entrance fee for the privilege of climbing 709 steps to take in a view of…well, nothing we couldn’t see from the bottom for free. There WAS an old man at the top, playing a handmade banjo with what appeared to be a bow, but he was playing Ed Sheeran songs, so I’m not sure how historically accurate it was. 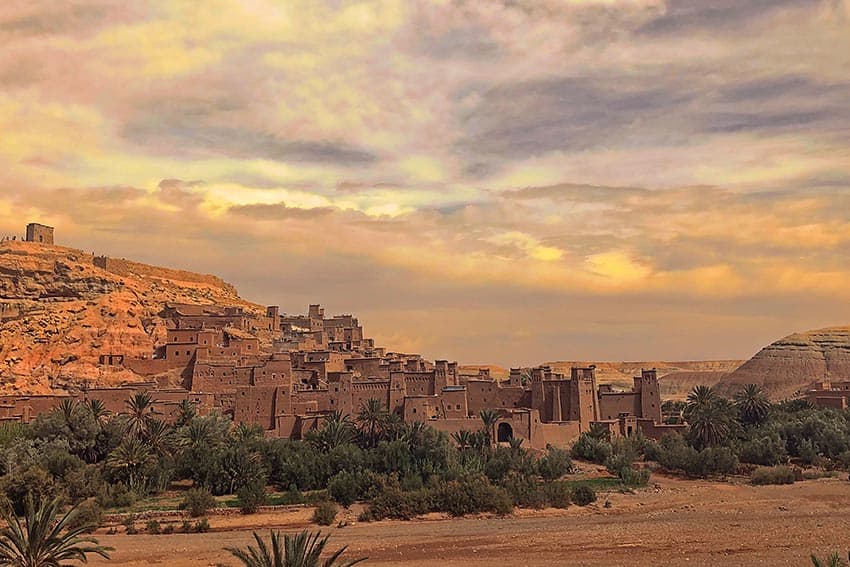 Nevertheless, we all hiked back down from the top, and were escorted across the new bridge, and swept into a rooftop restaurant for lunch.

Lunch was good. The hostages ate tajines. They drank Coca-Cola, and juices, and never complained.

Still, we were put back in our shackle-wagon, and once again, taken into the mountains. We passed through Ouarzazate around 5pm, which is only 100 miles from Marrakech. We could no longer remember how to do math, but it didn’t seem to add up…hadn’t we left 8 hours ago? Hadn’t we only stopped for a total of two? Was it really still Tuesday? Are you SURE we aren’t in Algeria? It smells like we think Algeria should smell…No?

Eventually, we pulled into a hotel, where we would stay for the night. We had a huge group dinner, all the prisoners at once. The food was tasty, and plenty of it, and no one dared mention that anything seemed amiss…what if they were listening? What would they do to us? Instead, we ate, we slept, and after a quick breakfast at 8am, we piled back into the van and away we went.

Y’all, I have no idea where we were or why. 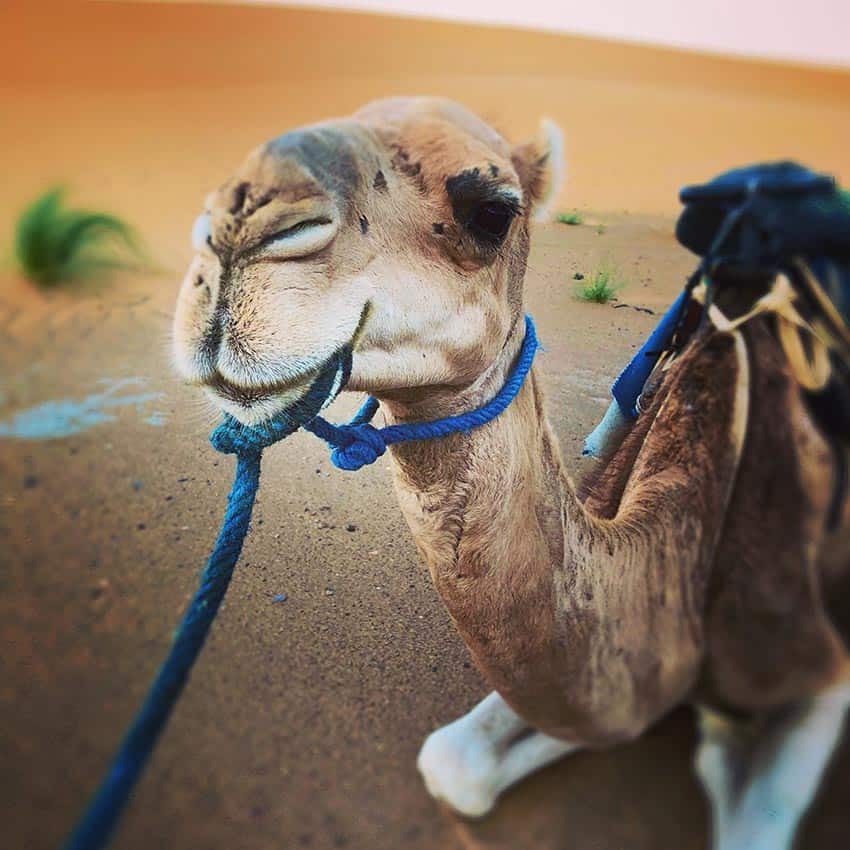 We stopped two hours into Day Two at a small village and hiked through their vegetable gardens, eating fresh almonds and ripe pomegranates along the way. It was beautiful, and interesting, and we all really enjoyed it. It just wasn’t on the manifest…so, I couldn’t tell you why we were there. But, we also got to meet a woman that was making rugs…From scratch. Like, not with yarn from Michaels. She was combing wool with brushes, and we got to help her spin it into garbled string. She may have been a hostage too…in the hour we were there, having mint tea (maybe the most delicious I’ve had in Morocco, which is saying a lot) she said two words. And she said them a LOT. Maybe 596 times, each. And we said them back, as she said them. 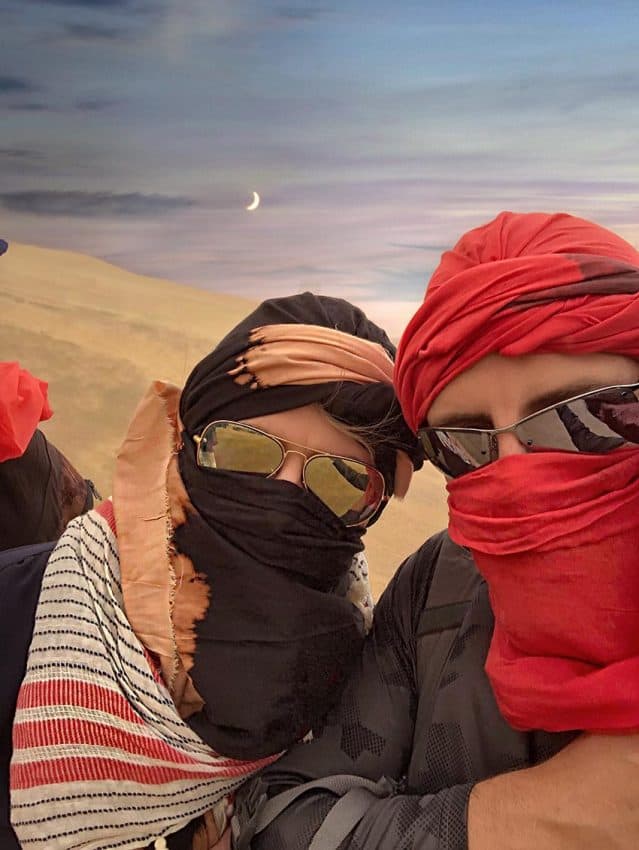 I kid, I kid. She continued repeating the words Thank You, in Berber, and in Arabic. When we helped, she’d say Shukran, Sahaa. Over and over. If we messed up, she’d smile and say it again. If we laughed, she’d say them again. It may have been code for Run, Crazy Ass, but we did not heed the warning if so. Instead we returned to the van and drove deep into a canyon, with walls that soared into the heavens. A crystal clear silver creek sliced it open, and we got to stretch our legs and enjoy the sun from the waters edge. It was one of those miraculous places you never forget, and pictures don’t do it justice…it was just…stunning.

After lunch (whaaa? We get to eat MORE TAJINE?!?) we got back into the van and rode until 5 o’clock. Morocco is apparently 15 hours across, in hostage hours, in case you are counting.

So what happened at 5?

We boarded camels! This is what we all signed up for, the camel trek in the Sahara! How exotic and romantic and just…yesssss! Camels! 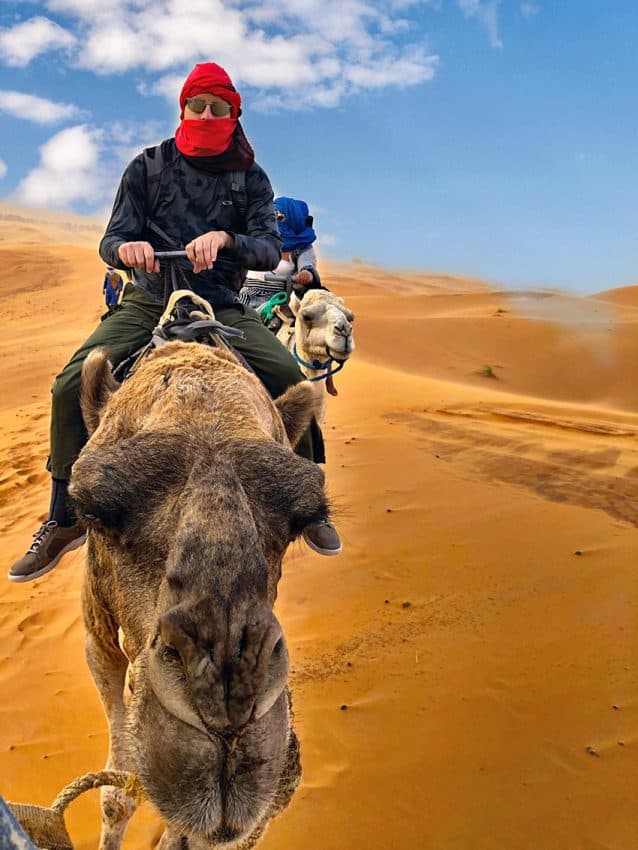 Camels hurt your undercarriage in 4 minutes flat, you guys. If someone tells you they rode a comfortable camel, they are bold faced LIARS, and not to be trusted. Minutes one through four are fun and everyone is laughing and happy and taking selfies because…camels!…until they realize we signed up for a two hour caravan and OhMyHell the humps are bruising our humpers. Two. Hours.

But wait! There’s more!! A sandstorm! Any exposed skin is beaten raw by the whipping sand, which finds orifices you didn’t know you had. Luckily, we had been forced/encouraged to buy scarves before arriving in the Sahara, and taught how to wrap them into face covering turbans. Our captors were very thoughtful about this knowledge…we’d have been full on blinded had we been unprepared.

But Susan, wasn’t the sunset beautiful?

Yes it was. It was a stunner. And riding the camels over mountain high dunes, watching the sun set and the moon rise in prismatic colors was incredible.

It just hurt in every single way.

Two hours from when we began, we arrived at our Berber tent camp, most likely 67 yards from a Moroccan Walmart parking lot, but no one would know because it was dark and there was a tent full of chicken tajine to eat before bedding down in a group tent with our Italian captives. 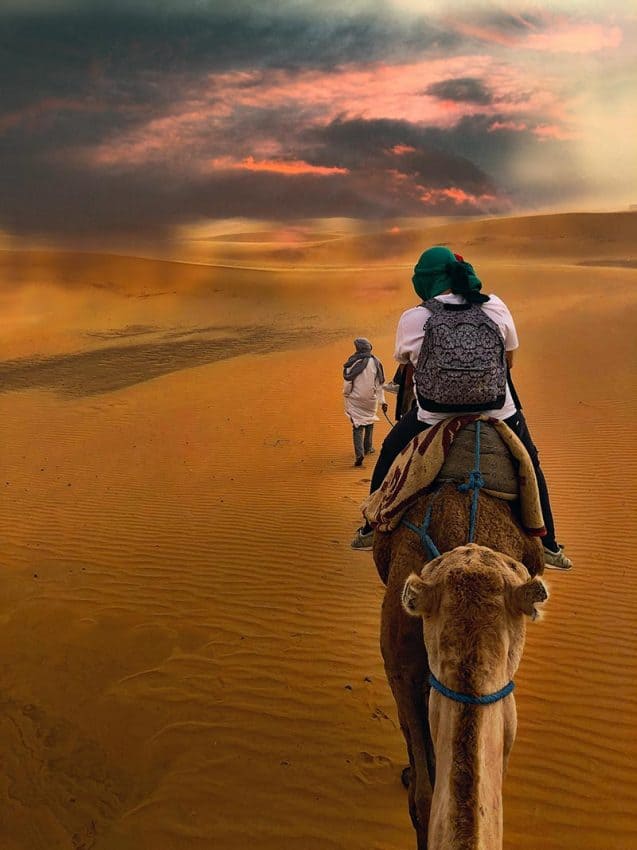 By 5, we were up again, still half asleep, but climbing on our camels for the ride back.

This part was worth the entire capture.

The sky. The sky at 5am in the Sahara is the most beautiful thing I’ve ever seen. It is a perfect shade of black indigo, with more stars than have ever been seen. The Milky Way spilled overhead, almost rose in color, and all the constellations we memorized in schoolbooks were hung like Christmas lights. It was overwhelming, and I caught myself at times slipping from my camel, my head arched at all the wrong angles trying to convince myself that this sky wasn’t a dream.

How our guide found his way in those dark dunes, before any glimmer of light found the sand, I can’t tell you. It was a clumsy ride, and the camels were a little less sure-footed in the dark, but somehow we made it back by the sunrise in one piece. 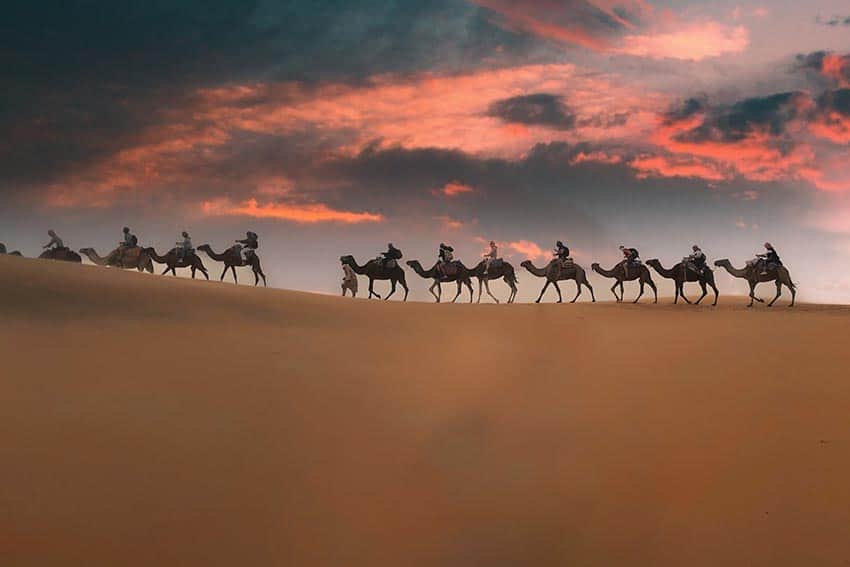 Meaning, our driver, aka The Captor, informed us there would be a 9 hour ride, with no stopping other than for lunch and the bathroom. I think he realized he was getting paid by the job, and not by the hour, because that man found 5th gear and refused to shift out of it. We didn’t mind, we were all beaten and bruised and had sand in our bras and socks and teeth, and the thought of a shower, even if it was 9 hours away, kept us all alive and hopeful.

There was chicken tajine.

There was a bathroom stop. Maybe two. I can’t recall. Sometimes we were too shaken to get out of the van. I think I heard weeping once. I can’t think about it too hard.

And of course, there was Despacito.

We arrived back in Marrakech, safely, and without incident. Our driver helped us with our bags, and Rusty tipped him for keeping us alive.

Would I do it again? This excursion?

Not today, but maybe someday. I still hurt. I still have bruises in places that don’t bruise. I had to have a full on hammam scrub down this morning to get the filth of the desert out of my skin, and the sand out of my crevices. I’m still afraid to eat because it will probably just taste like tajine.

But that sky, y’all.

I wish you could have seen it.