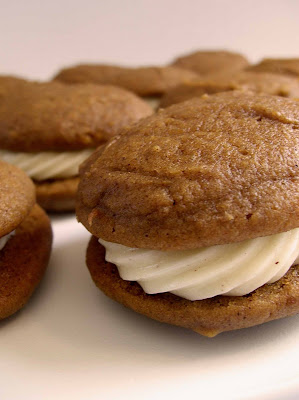 Or the post otherwise known as Peabody is the Devil.
Yep, you heard me right. The Devil. 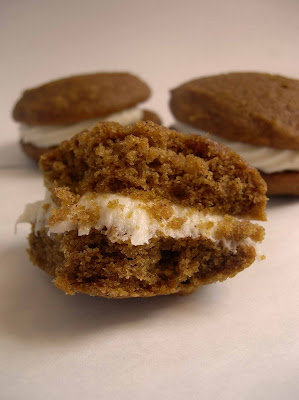 Did you see her post on Pumpkin Whoopie Pies? Well, I did…and I knew the minute I saw them I HAD to have them. You see, my hub has an affection for pumpkin. His Mom makes his favorite Pumpkin Cookies. His Nonna makes him Pumpkin Pies. And you ladies all know how hard it is to out-do a Mom and a Grandma’s baking, right? Like, even if YOURS really does taste better, he can’t (won’t) admit that. No way. He’ll eat yours and love it but you’ll still always be trying to make him the perfect pie.
So when these little goodies popped up in my reader, I saw the solution. Make him a pumpkin yummy he hasn’t had before. A concoction he cannot compare to Mommy’s. And wouldn’t you know that I had a can of pumpkin in the fridge left over from the pie I made him last week? I did. Fortuitous, I guess.
Or not. 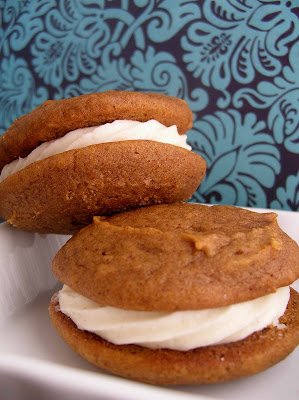 It wasn’t until I had started mixing all the ingredients that I realized my puree was Pumpkin Pie Puree, not Pumpkin. (Peabody also had this same misfortune with another recipe…read the label kiddies. I have now learned my lesson.) Luckily I did have a can of Pumpkin in the cabinet though. But I needed 3 cups, and the can was just under 2. So I used the Pumpkin Pie puree for 1 cup. Because it was a bit runnier, I amped up the flour a bit, maybe by 2 Tablespoons, and when it came time for the sugar, I didn’t pack mine in too tight because the pie puree already adds some sugar. My other difference with the recipe was the oil. I used 1/2 cup Canola oil and 1/2 cup melted butter. It’s what I had. So this is a very forgiving recipe – and tastes divine. 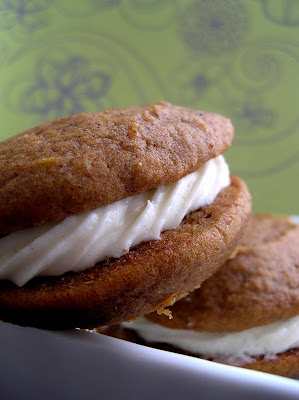 Perhaps too divine.
I cannot stop eating the damned things. Therefore, Peabody is the Devil. And I will tell you something she didn’t bother mentioning: this recipe makes a LOT of cookies. A LOT LOT. Like, 60. And they aren’t itty bitty either. They are every bit as big as an oatmeal pie, fat and cakey and filled with cream cheesy goodness. Once you sandwich them, yeah, you only have 30…but still, that’s a whole lotta calories going on.
If you like pumpkin at all, ou really should try these. Head over to Peabody’s site for the recipe…it’s a keeper. I’ll leave you with my recipe for the filling, as I am not into Maple the way Canadians are. I filled mine with a cinnamon spiked cream cheese that I could eat by the spoonful. Hope you like it! 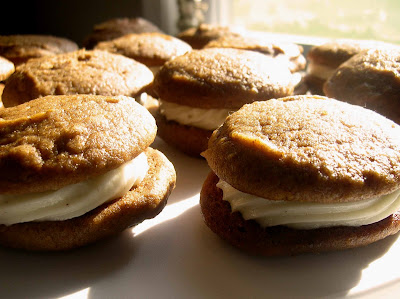 Spread the love
My Son is a Laughing Little Thief. My Kitchen, My World…Ecuador