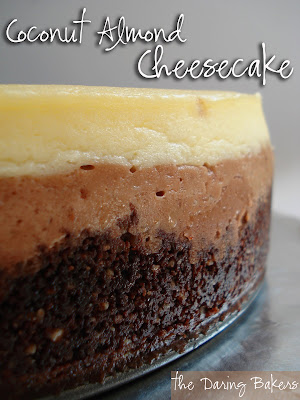 The April 2009 challenge is hosted by Jenny from Jenny Bakes. She has chosen Abbey’s Infamous Cheesecake as the challenge. However, she left us so much room to play around with flavors that I doubt you will find two cheesecakes alike today in our posts! (And let me tell you, there are over a thousand of us Daring Bakers, so that’s a lot of cheesecake – not to mention, I imagine there is now a small shortage of cream cheese in your grocery. Can’t you just see the panic on the faces of Dairy Farmer’s worldwide? Out there sweet talking ol’ Bessie, encouraging her to produce more milk, offering her the grass on the other side of the fence if only she’ll cooperate?) Poor Farmer…worry not. We’ll be moving on to a whole new challenge again next month. Leave little Bessie alone. Just sit back and enjoy the cheesecake. 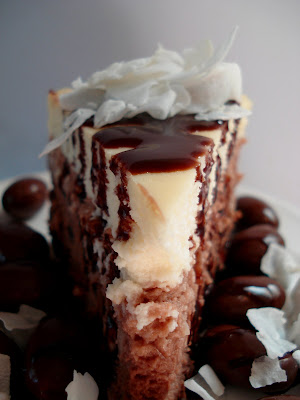 Because we were provided a recipe that bases itself on the simple ingredients – cream cheese, sugar, eggs, whipping cream – and then told to “get creative” – well, I did just that. 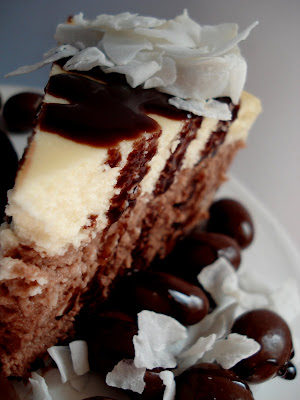 A few days ago Kroger had their Pepperidge Farm Goldfish on sale for a dollar – yep, a dollar – I bought up plenty of them. Not just the typical cheese cracker goldfish, the Graham Cracker goldfish, too. They had them in honey baked, cinnamon, and also in chocolate, so I opted to use the chocolate cookies for my cheesecake crust. I ground a little over a cup and a quarter of them, and added in another half cup of pulverized almonds to finish out my base.

I then proceeded to make my batter, following the given recipe, though I did add an extra half brick of cream cheese as well as use half sour cream and half heavy cream. I chose to add almond extract, vanilla extract and even coconut extract to the filling…and let me tell you, it smelled wonderful even before baking. 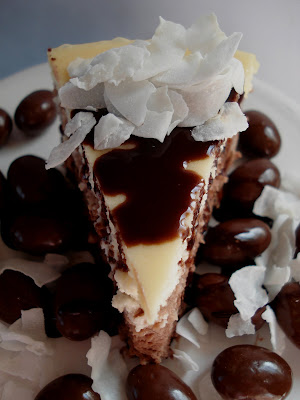 Then I dumped all of the filling out of the mixer bowl.

Not onto the floor or anything – whew – but into a separate bowl. I left about a third of it in the mixer bowl, and added 3 ounces of melted Green & Black’s Bittersweet Chocolate. Once well mixed I poured the chocolate batter into the crust and began working on my middle layer. For this section, I added about 2/3 cup of sweetened coconut and 2 tablespoons of Nutella and let the KitchenAid mix it thouroughly – then poured it on top of the chocolate layer. Finally, I poured the remaining cheesecake batter over the other layers and allowed the whole cake to bake at 325 for 90 minutes, followed by another hour in a waterbath. 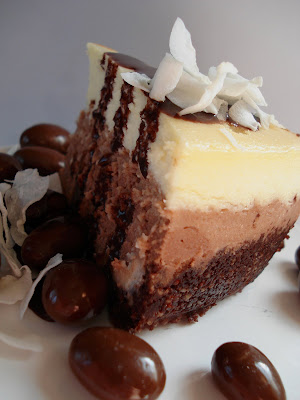 I hate waiting. It’s terrible. Sitting there, all alone in my fridge is this perfect looking cheesecake, no cracks, no blemishes – utter perfection. And I am not allowed to touch it. I had to take a nap just to forget about it. But once it was cool and I could unleash it from the springform – oh my, yes. Gorgeous crust. Evenly baked. Tall and creamy and the layers actually looked like layers.
Oh, and the taste? Some kind of yum. I almost named this cheesecake an Almond Joy Cheesecake, but there are already recipes out there for an Almond Joy Cheesecake…and this isn’t like them. 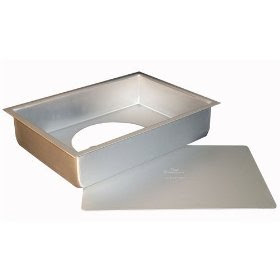 So if you are still here, leave me a comment. What should I have named this cheesecake? Yes, there is a prize involved….a cool one at that! How many times have you wished you had a square cheesecake pan? One that allows you to make evenly cut square pieces and not the aggravating wedges involved with round pans? Well, here’s your chance to win one! I am supplying one randomly chosen winner with a Square Cheesecake Pan from Fat Daddio’s. The size you will recieve is 12 by 12 by 3, so quite a big size!

Just leave your cheesecake name suggestion here for a chance to win…and good luck! Winner will be announced on May 1st via TWITTER – so you may just want to follow me. If the winner doesn’t get back to me by the 3rd – I’ll choose another winner!

Stop back by tomorrow – May 1st is my Blogiversary and I will be giving away a prize every day this week with all winners announced on Friday….so good luck and keep on coming by!