My sister is a huge fan of anything Crème Brulee.  We were on a cruise once, and the dessert options included a Grand Marnier Crème Brulee. She nearly birthed a chicken on the spot.  Me?  I can take it or leave it, as I am not all that in to custardy desserts.  Especially flan. Gag. I can’t take that consistency.  It’s like congealed old milk.  And speaking of congealed, what’s with the obsession in Julia Child’s cookbooks with aspics? Aspic is like a big, fat mistake…definitely not something I would make on purpose.  I’ve never been sitting around thinking, Hmmm. I have a few whole fish with eyeballs still, and you know what? I think I’ll just boil down some fish bones and spare parts, make some Jell-O out of it, and suspend those dead suckers right in the middle of it. Nahhhhsty. Who thinks of crap like that? 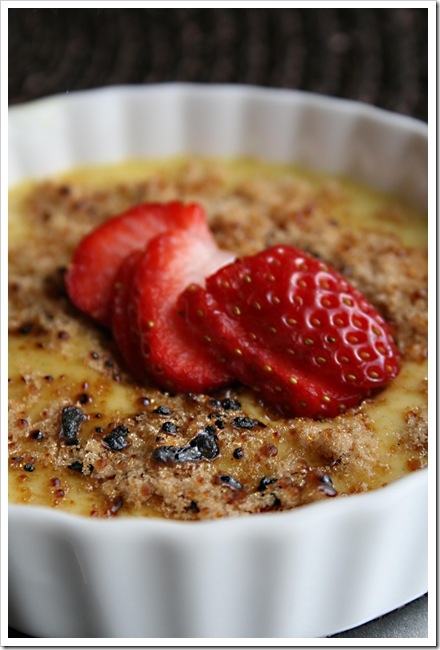 But back to crème brulee.  I thought I could take it or leave it.  But that was before I made the crème brulee from Mastering the Art of French Cooking. Dear Lord.  I only made one change…yes, just one!  Instead of using vanilla extract, I used one whole vanilla bean – another Tongan from Beanilla – and steeped it in the heavy cream while it cooked.  I topped the cooled custards with brown sugar (instead of white, which melts more smoothly to give you that flat shell you are used to) and it offered a nice, sweet addition after I hit it with the torch. The little almost burned spots? Imagine toasted marshmallows, followed by a taste of the best vanilla ice cream you’ve ever had.  That’s the best I can do to describe it!

I’m not sure why, after all this time, I hadn’t made crème brulee.  Honestly, I had never even read the recipe entirely, or I would have known how easy it really is. Whoudda thunk it? Doesn’t “crème brulee” just sound all fussy and complicated? Let me demystify it for you…it’s not. A few egg yolks, some whipping crème, a little sugar – that’s it. If you can temper eggs, you’ve got this one. (Trust me, you can temper eggs if I can.)  Give it a try, I know you’ll be thrilled! 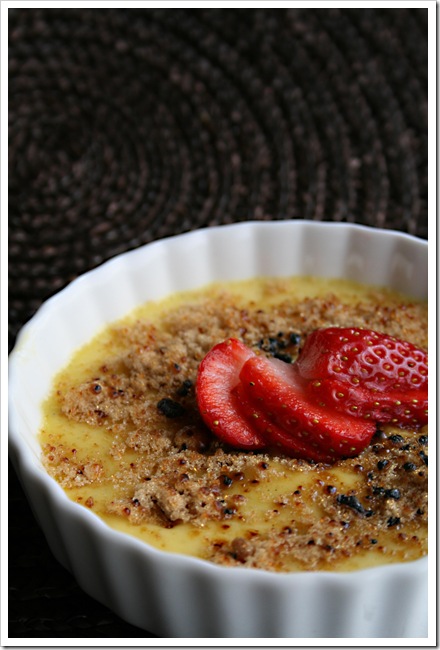 adapted from Mastering the Art of French Cooking, by Julia Child

In stand mixer or with hand mixer, beat egg yolks with the 5 Tablespoons of sugar about 3 minutes, until ribbon forms.  Then beat in the cornstarch for another minute.

In medium saucepan over medium-low heat, bring heavy cream and scraped vanilla bean (you can even throw the whole pod in there as well) to a boil.

Slowly, very slowly, a few drops at a time, add the boiling cream to the egg mixture to temper the eggs while the mixer is running on LOW. This prevents the eggs from cooking.  Continue to add the cream until it is all incorporated. Remove the vanilla pod – just throw it away.

Return the mixture to the saucepan over moderate heat, watching very closely, and never allow it to simmer. Stir constantly. The sauce will thicken as it cooks – but do not let it get above 170 on your candy thermometer.  It should be thick enough to coat the back of your spoon.

Pour into shallow bowls and refrigerate for several hours. Sprinkle with sugar and use your torch to crystallize it, or, alternatively, place in a preheated broiler for about 5 minutes.  Top with fresh fruit if you like. (The strawberry was wonderful!) 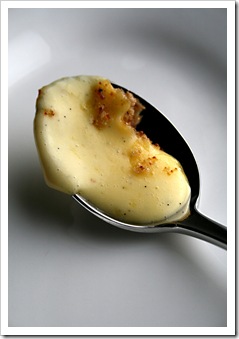 Now, I have some good news for all of you with Beanilla Envy.  The prices they offer are already great, but, if you order and type in DOUGHMESSTIC in the coupon code field, you’ll get an extra 5% off your purchase.  i really can’t tell you how much I love the quality of their product – it has made a lot of difference in my baking flavorwise!

Have  a great day! (and try to stay warm! What’s going on with all this COLD everywhere? Don’t say winter…it’s been winter before without all this frigidity!) See you next time!