50 Shades of Grey has infiltrated my life, and now everyone – that means you – must suffer.

I have many, many thoughts on this trilogy- 50 Shades of Grey, 50 Shades Darker, 50 Shades Freed…some of which it’s likely best I keep to myself. But who am I kidding? You know I don’t keep much to myself. 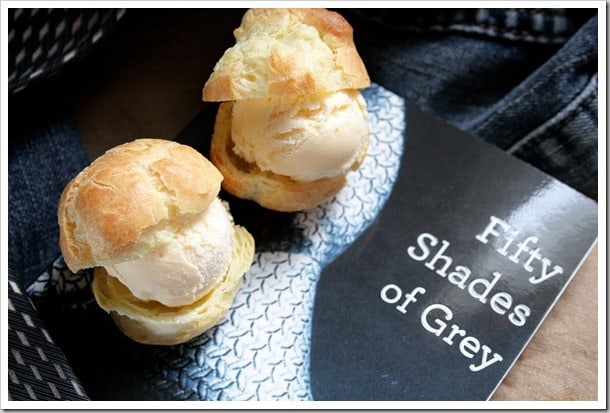 If you’ve read the books, you know why this Vanilla Ice Cream is tied in to the books. But to those of you who have NOT read the series, I’m going to give you a brief rundown and likely long and drawn out editorial.

Well, I haven’t written a book report since college in the late 1990’s, and this is my blog, and I can do whatever I want.

50 Shades of Grey, in case you haven’t heard, is a poorly written and yet absolutely impossible to put down series of “Mommy Porn” that has swept the nation. Don’t ask me why. There so many bad things about the books that I really don’t even know where to start. The author has little imagination, or rather, a bad imagination. I feel pretty sure she’s never had sex, ever, or if she has, it’s with a cat. Nor has she spent any time at all in a penthouse, or a hotel, or a boat, or a glider, or an office. She’s never driven a car, never had a bracelet from Cartier, never had a glass of Cristal, never been to Aspen, and definitely, never been to France. Did I already say never had sex? She’s never had sex.

I think she reads lots of books with pictures, and Googles more than most.

Or maybe Bing. Either way, she’s not very good at it.

The basic “Back of the Book” premise is this: a 21 year old recent college grad fortuitously falls in to a relationship with a 28 year old bazillionaire bohunk who just so happens to like to tie girls up and do deviant things with them. Under contract, of course. And in a specially designed room that smells like leather and Pledge. All day long, everyday, (or at least on the weekend) and then spend a buncha money on safe cars and employing a cast of poorly developed supporting characters.

The Vanilla comes in to play early on, so I won’t really be ruining this for you.

College girl (a virgin, no less) ends up doing the deed with moneybags on her first date with him. He doesn’t force her into the Room o’ Pledge though, and thus, dubs the experience “Vanilla Sex.”

Here’s where I go in to my rant that you didn’t ask for. Let me list for you the complete ridiculousness that these books are.

1. Good Looking 21 year old collegiate virgin with a very sexual roommate. Riigghht. Sure she’s a virgin. Me too.

2. 28 year old gozillionaire who we never really know how he makes money, other than he’s the complete rip-off 28 year old version of Richard Gere in Pretty Woman. A shipbuilder? Maybe? No. Unless he’s Zuckerberg, he doesn’t make 100 grand an hour. BUT – I can buy that before I can buy that a 28 year old male can have round after round of sex without stopping. Come on. If he was 19? Maybe. But this guy’s been around, and it just ain’t happening.

3. Cherry. Multiple Os. Give. Me. A. Break. I hope no 16 year old little girls are reading this, or they’re in for a world of disappointment come prom night. Just go to the dance, grab a bite at Applebee’s, and go to the after-prom party and sing karaoke. You’ll get more out of it.

4. In the course of 3 books, she ALWAYS gets hers, and gets hers first, or rather, simultaneously, every single time, save once. This book may as well be science fiction and take place on Neptune.

5. Cartier doesn’t even make a Glider Charm. Come ON. Does she own a computer at all? If I was Cartier, I’d be pissed.

6. 110 POUNDS. That’s what 5 million dollars in 100 dollar bills weighs. In case you were wondering. If weighs roughly what our heroine weighs. Good luck with that.

I’m sorry, but E.L. James has only had sex with a tabby. I can almost buy the umpteen billion dollars, but I can’t get past the orgasm thing. She’s living in outer space. With cats. And Pledge.

I don’t want to say any more.

I will, however, say I enjoyed the books, sordid and ridiculous as they were. Cartier also does not make a vanilla ice cream charm. 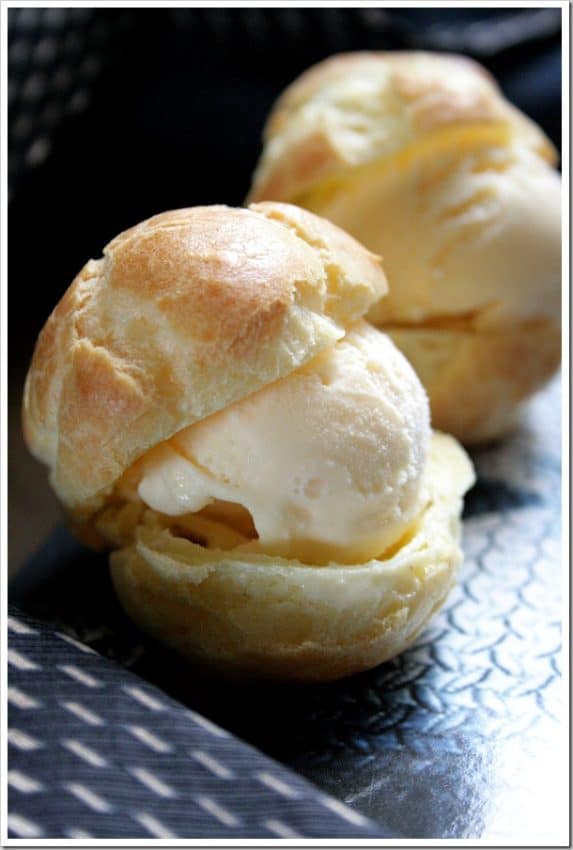 Nope, nothing plain about vanilla.

I recommend eating it in bed, if you can, but avoid being tied up at the time, as I read it gets all melty, and you really don’t get much of a taste, then you have to do laundry.

You get other stuff though. Supposedly. (Not gonna happen, ladies. All your gonna get is a bottle of Tide and an evening against the spin cycle.)

Just make the ice cream. Read the books. It will all work out.

Notes: Vanilla beans are a versatile ingredient in cooking and baking. In this recipe, once you remove the steeped pod from the milk, pat it dry and save it for future use, such as adding to a container of sugar. Just shake the container once or twice a week, and you’ll have a delicious vanilla sugar to add to your baked goods or morning coffee. Don’t throw those pricy beans away!

While I can’t buy you cars and villas and whip you into submission, I CAN offer you some Vanilla. Like, real vanilla. I’m a Beanilla addict (you should see my cupboards), and I refuse to use anything else. I full on suggest the beans from Uganda – talk about robust! – for making this ice cream. However, all of their varieties are amazing. I also use their vanilla sugar and salts, in addition to their extracts. Yes, I do make my own extract as well, but I use their beans to do it. Like I said, I’m an addict.

How would you like a nice assortment of goodies from Beanilla? I’ve arranged just that for you. Wasn’t that nice? (See, I can be nice sometimes, as long as you don’t lie about your sex life.) You know what else? I’ll throw in a copy of my brand new Ice Cream cookbook. Heck, I’ll sign it if you want, but that seems silly since I’m not famous.

Here’s how to win:

There you go – 4 chances to win. Giveaway is open until 11:59pm EST on May 25. Vanilla is courtesy of Beanilla, and book is courtesy of me. I was not compensated in any way for this post. Good Luck!

I fully blame Brandi of BranAppetit for introducing me to this raunchy series of books, so if you have issues with my reading them, take it out on her. And, in case you are needing another Grey’s inspired recipe, check out her upcoming post – she made stir fry.

No idea who chopped the veggies.