About seven years ago (I really can’t believe it’s been that long), Jon decided we needed a grape arbor.  Okay, perhaps it was ME that decided we needed an grape arbor, but it was Jon that agreed to build it.  I spent a few days designing it – sorry, nothing is ever as easy as it could be when it comes to me, as I am addicted to graphing paper – and then after throwing a little hissy, Jon set about the building of it. 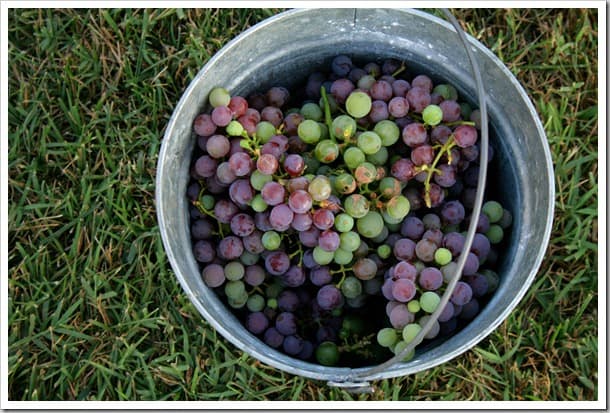 It’s made from cedar – a man was gracious enough to sell us several large posts for only $5 each – and lots of cross twigs, branches, etc.  It really is quite stunning (thanks to my design?), and makes a real statement here in the garden.  Last year, we even had a couple of picnics under it, as it’s the perfect shady place to set up a little buffet and has a wonderful view. 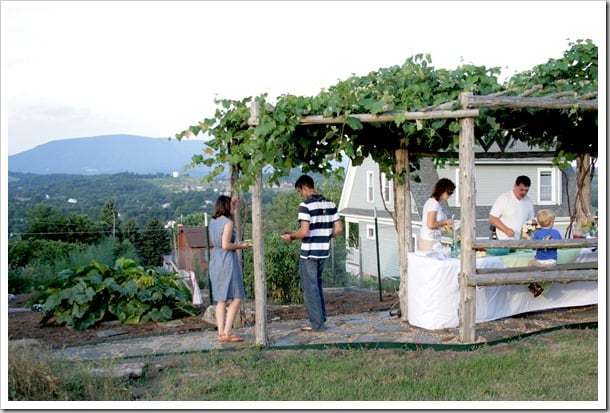 The picture above is from last year, and though it’s pretty, it’s not NEARLY as full and tunnel-like as it is right now.  All told, the stone floored bottomed arbor is about 24 feet long, and maybe 6 feet wide.  We have 4 grape varieties planted, and they have grown strong and tall and cover the arbor just as they should, making a secluded cavern, just like you see in magazines. It’s a magical place to hide sometimes. So, so pretty. 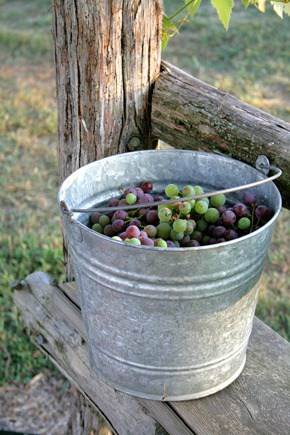 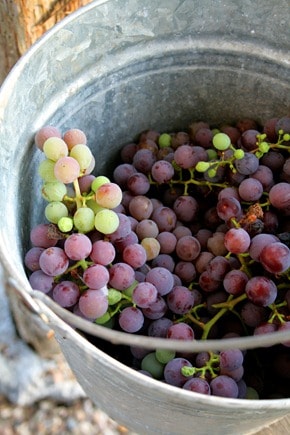 Having a grape arbor isn’t all sunshine, though – grapes are fickle.  Ours, for a few years, were plighted with one random disease or another.  But, thanks to perseverance and a talk with a few winery owners, we were able to treat them, which led to a bounty of gorgeous grapes.

I’ll be honest – I don’t do much with them.  I simply like having them, I like the arbor, I like the IDEA of being the person that grows her own and bottles every drop.  But I don’t.  I suck, I guess. 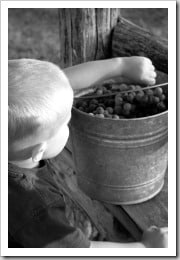 But, I love it when I do make use of them, I love spending time with Seven in the backyard, picking them, watching him get excited about them.

Instead of giving you a run down of how to make your own juice, which I am in no means an expert at, I will instead link you to Elise of Simply Recipes, as she has a wonderful Step-by-Step tutorial if you are considering making your own juice.

Want to make Grape Jelly?  Yeah, me too.  Jessie of The Hungry Mouse has a great picture-filled post about Concord Jam making…looks like a great place to start.

But what if you are looking for other grape recipes? Look no further – here is a round up of the best looking grape goodness I could find. Click through, get inspired, and enjoy.

As you read this post, I am likely JUST landing in Roanoke, returning from Fresno, California, where I have been touring – The Land of…GRAPES.  Well, more specifically, Raisins.  I am thrilled to be one of the California Raisin Ambassadors – so expect to see a lot more information on my trip, as well as a few more raisin posts showing up here over the next year.

Spread the love
A Weekend in Roanoke, Virginia Pizza Popovers