A Cake Competition… and One of My Favorite Haunts!

I’m not sure how this even happened, but once again, I am judging the cake competition at Pearisburg’s Festival in the Park. That’s all going down this Saturday, June 15, at 10am. Hopefully some of you readers are local and will come out for the contest (does anyone local other than my mom read my blog? Mom, make a cake.) and, I hope you will bake something up and bring it on down for me to sample.

Well, that’s easy. It’s an excuse, nay, a requirement for me to eat as many bites of cake as I possibly can. Being force fed sugar for the greater good is well, good. Just plain good.

The winner will be awarded a plethora of items from Duff Goldman. You know him – the Ace of Cakes guy. I’m happy to report that The Duff is a good friend of mine, when we aren’t fussing at one another, and now I have a BUNCH of cake baking/deco items to bestow upon our winner. Heck, I will even throw in a cookbook or two just to liven the pot.

I won’t be alone in my judging efforts though, oh no. I’ll be joined this year by my friend Chef Mike Behmoiras, who runs The Bank Food & Drink, our droolworthy restaurant in town. I’ll tell you more about The Bank in a minute, but for now, I shall harass poor Mike.

Mike doesn’t like sweets. You may want to keep that in mind for when making your cake. However, I DO like sweets, and, I am bossy, and no matter which cake Mike thinks is best, it’s really only my opinion that matters. You’ve been warned. (Ahem, chocolate and lots of it.)

Seriously though, Mike is a great and fun loving guy, and I hope you will come out to meet him, and then pop in to The Bank one evening for dinner. I visit as often as I can, usually once a week as long as I am in town, and I have yet to be disappointed. My favorite at one time was the fresh made mushroom ravioli, but that’s now gone so I am being forced to try new things. The duck breast never fails to please…so maybe give that a shot? Just be sure to save room for dessert. I don’t want you to be sorry.

So, here’s a little more about The Bank. You do want to know more, don’t you? Of course you do. 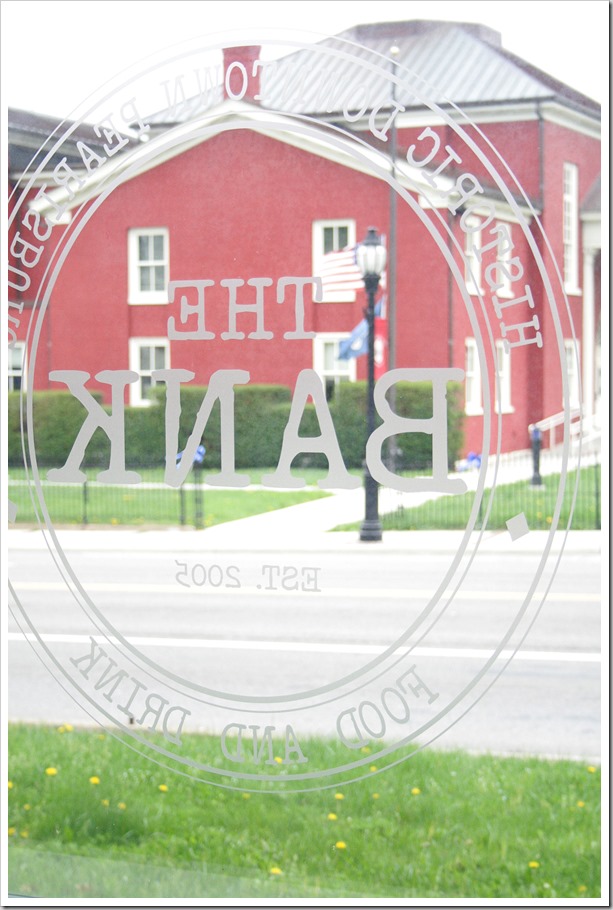 In 2012, The Bank Food & Drink in Pearisburg, VA reopened under new management, and with that change, a new chef. If you’ve not had the privilege of visiting, you definitely should. Award Winning Chef Michael Behmoiras brought a menu of contemporary American flair to the area, featuring local meats and produce which shine in each of his dishes. 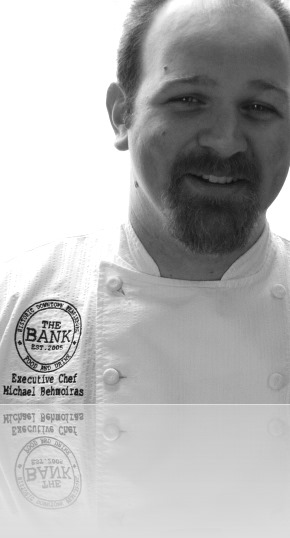 Chef Mike has worked around the country, including New York, Miami, and most recently at Wolfgang Puck Catering at the Georgia Aquarium in Atlanta. He brings with him a love of food and enthusiasm for creativity in the kitchen that is beyond refreshing. Best Chefs America just selected Chef Mike as one of the featured chefs in their first publication available in March 2013. Chefs are nominated for participation by fellow chefs, other culinary professionals and food enthusiasts. The publication profiles top chefs and their restaurants.

His latest menu, which changes seasonally, takes advantage of the freshest ingredients, and changes are made on a whim to showcase special ingredients. Seared sea scallops, fresh made raviolis, inspired salads, and delectable desserts such as a chocolate bombe are just a few of the incredible offerings at the bank each night. Drinks are also on the menu, and change according to the menu and season. Rachel Isley is the noted mixologist, an award winner herself, and for good reason: her creations are creative and inspired.

The Bank has private rooms for small parties, such as the warm and inviting Chocolate Room, as well as a larger room for larger groups. Of course, there is plenty of room for casual dinners for two. Reservations are suggested, and the restaurant is open from Tuesday through Saturday beginning at 5pm. For more information, a current menu, news and events, visit www.thebankfoodanddrink.com

NOW – Make me a cake! See you Saturday??