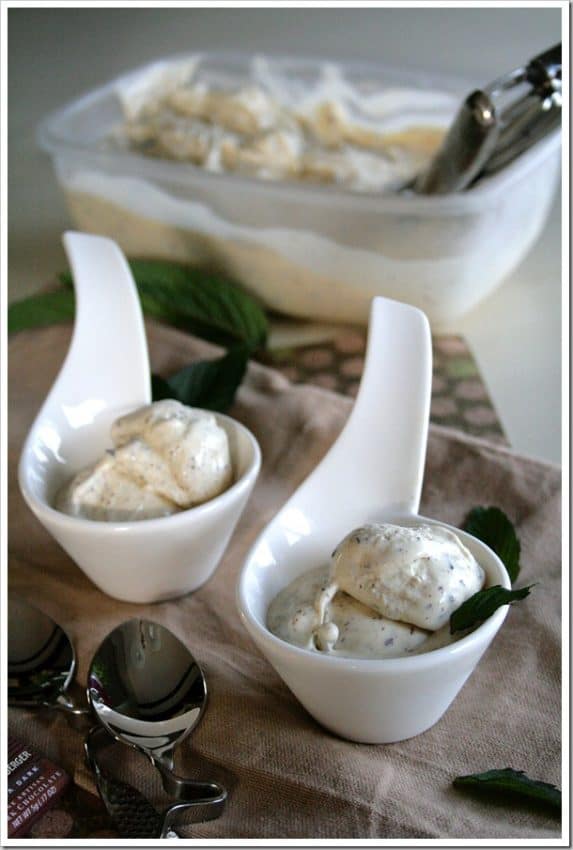 That kind of sounds like a stutter, doesn’t it? Chocolate Mint Chocolate Ice Cream. 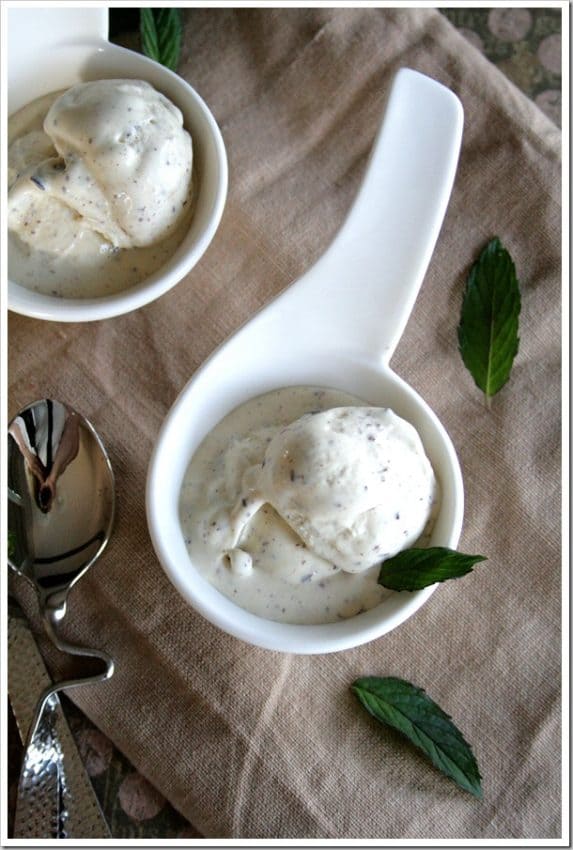 Why the double Chocolate? Well, that’s because I have Chocolate Mint. Did you know there is such a thing? There is! It’s mint, it has a brownish tinge to the edges, and it smells and tastes vaguely of cocoa. Strangest thing, but true. It’s not overpowering, like a peppermint, just subtle and really pleasant.

Let me tell you a little history of why I have this mint. A few years ago, when we first moved into our house and had just started our garden, I made a trip up to Bob Pond Blueberry Farm. It’s a stone’s throw from where I grew up, and a really beautiful place. Small house, fields and fields of blueberry varieties, and flower gardens like you can’t imagine. While I was there one morning filling my blueberry pails, I ran into the owner as she was weeding the garden. It smelled fantastic, so I asked what the smell was. Chocolate Mint, she said, and went back to plucking it up by the roots from her garden. 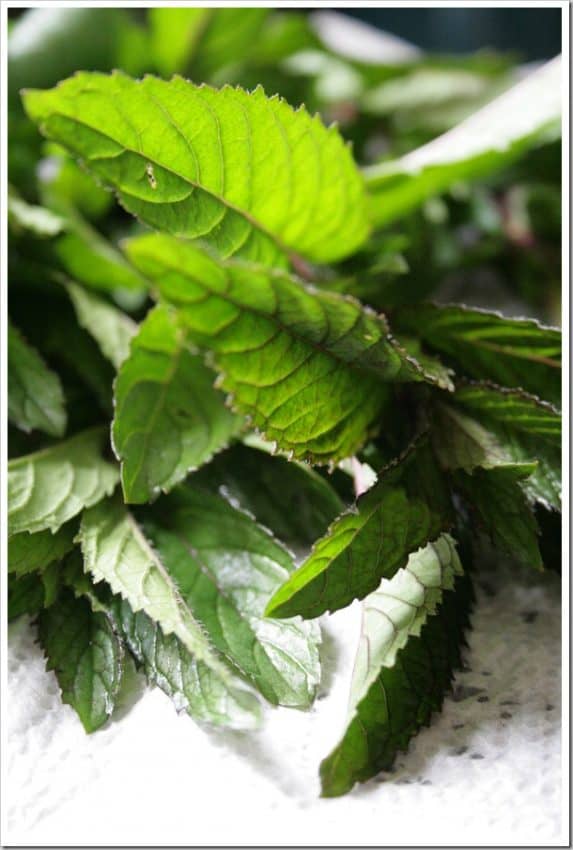 She was pulling it up by the handful, and tossing it aside to burn. I couldn’t fathom why. Chocolate Mint? A rare and certainly valuable plant, right? Why would you throw out anything with the word chocolate in it?

She knew I wanted it. I wanted those scraps of mint.

She happily gave me some and smiled, agreeing that yes, it is really amazing. And then she uttered a warning.

What? Of course I came straight home and chalked her up to being a few blueberries shy of a bucket, then proceeded to plant that mint in my newly built raised garden bed with a handful of other herbs. Two weeks later, that mint was growing, and I was in heaven. I’d snip off a few leaves here and there, reveling in my green-thumb, and secretly giggling at my good fortune. By summer’s end, it had taken over half the herb bed.

By the next summer, it had jumped the bed and was growing in the mulch, in the yard, and even on the wooden bed rails. We yanked up all of it in a fit, and had I been in my right mind, I would have destroyed it all. We sprayed the remaining roots with weed killer, thus eliminating Chocolate Mint from the garden forever. I, of course, not quite sure I could live without it, salvaged a small handful and threw it down on our rock steps behind the house, and encouraged it. “If you want to live, you’ll find a way to live here.”

I didn’t plant it, I swear, I laid it on the rock steps. It grew there, rampantly, for 2 years, until again, we could no longer take it.  We dug it up and sprayed the roots – again. In a moment of remorse, we took some of the clippings down to our creek, and threw them on the bank.

Five years later, our entire creek is lined with mint. Not kidding, I could open a mint store or a mint spa. York could purchase all the mint they need for the production of Peppermint Patties, if only they wanted Chocolate Mint. I could take a picture, but I fear the mint would find a way to grow inside the digital camera. It’s that overwhelming.

However, I embrace it now. Not enough to make Mint Jelly – I don’t quite understand Mint Jelly, as I’m a fruit jelly girl, but maybe I should try. Once. I embrace it because it makes a wonderful – seriously wonderful – Mint Chocolate Chip Ice Cream. Yes, of course, use regular mint if that’s all you have, but IF you can get your hands on Chocolate Mint, do it. Perhaps you could make a field trip to my house here in the mountains of Virginia and pick a bushel or two of MY mint. You can even take some home – I don’t mind.