So I Made My Own Wedding Cake

Did you know? I just got married. That handsome fellow I told you about? Mister Texas? Rust? Yeah…I married him a few days ago, in the hotel where we met. It was a perfect day, with close family and friends, great food, lots of smiles. I count my blessings that I found him, and that I get to share him with my own family and friends, and that I am so accepted by his.

I am very lucky.

So…yeah, I got married.

Maybe you already saw that, if we are friends on Facebook.

Maybe you also saw the post my Matron-of-Honor posted, questioning how many people actually make their own wedding cake.

Yeah, I did that. I made my own wedding cake. 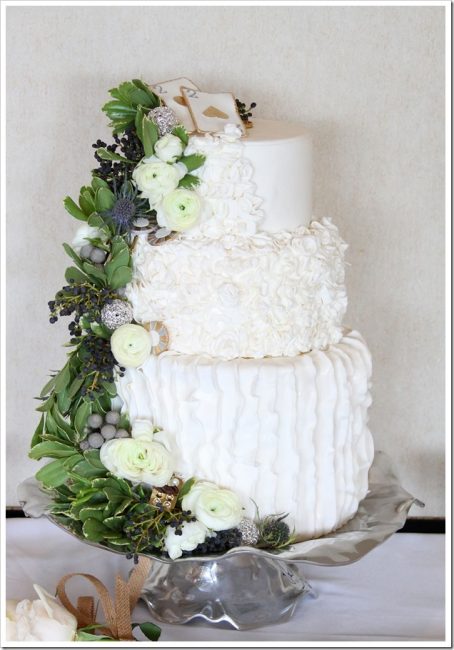 For me, it wasn’t even a question. I make cake. I decorate cake. I got pretty well known for it once upon a time, was featured on lots of websites, in some stunning magazines, and even caught the attention of people of the Food Network and TLC. So, when it came time for my own wedding, even though I’ve officially declared myself retired from the cake world, I KNEW I wanted to make the first cake my new husband would ever taste.

Kind of my little gift to him, if you will.

You guys, though…this cake. It has to be the cake that took a village.

First and foremost, I knew I wanted pumpkin cake. We were married the first weekend in November, so it needed to be pumpkin, at least for one of the layers. The wedding, by many standards, was very small – only about 30 folks. If you know cake at all, you realize 30 people do not require more than one layer. But I am not an underachiever. I wanted Rust to have the full-on fancy wedding cake experience. So, I had one 10 inch layer of pumpkin cake, a separate 9 inch red velvet cake, and then just for drama, two additional layers in Styrofoam. 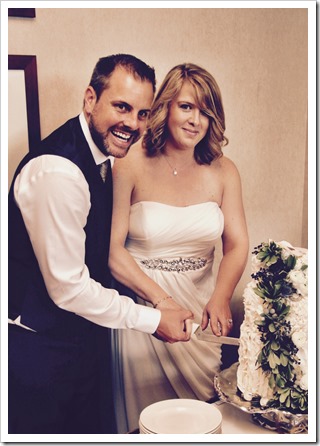 I’m not sure why, perhaps pride, perhaps fortitude, perhaps brain-damage, but I chose to cover one of the layers in very thin fondant rosettes and swirls. If you’ve worked with fondant, you know that this technique is fragile, time-consuming, and truly a labor of love. I worked for over 4 hours just on the fondant for this small layer, but I loved the results. I continued that technique on about 1/3 of the layer above it.

All went well – these were the Styrofoam layers so I was able to complete them and have them ready to go earlier in the week. The rest of the cake though….

I was lucky enough to have my best friend Paula, of Bellalimento, fly in for the wedding, and as a test of our friendship, I had her baking my pumpkin cake within an hour of her landing in Houston. That poor dear was baking well into the evening, but never once complained. She baked as I worked on more of the fondant layers, with a recipe neither of us had tried…and let me just say, we both had our doubts. I found the recipe on The Novice Chef, a recipe for Pumpkin Dream Cake. Once upon a time, I shared an apartment for a long weekend with Jessica, the blogger behind The Novice Chef, so I had some faith that even though the recipe was different, for sure, having no spice in the cake, and a batter that was the thickest I had ever encountered, it would turn out fine.

It turned out SO fine. We ate the cake scraps all morning, along with my own recipe for cream cheese icing. Quality control was in full effect in our kitchen that day, and boy did we ever enjoy it. So, THANK YOU Jessica for that great recipe, which you can find here. And thank you Paula for rocking another cake with me! (Hey, at least it wasn’t 100 of them!)

Another key factor in the cake prep was my mom. Poor mom. I gave her the tedious task of rolling out small ribbons of fondant so that I could more quickly cover the incredibly tall base layer of the cake. She had never used fondant, but she’s a great crafter, and can do most anything, so with her help, I had that layer covered in half the time I would have. Thanks mom! 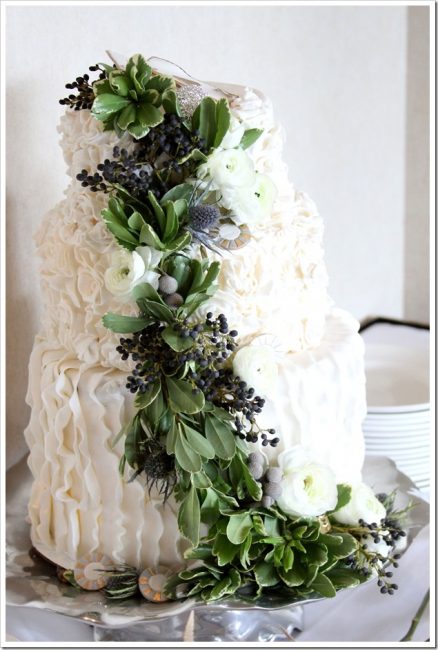 Once the base layer was covered in the vertical ribbons, and the top two layers were complete, it was just waiting time. And airbrush time. Yes, the entire cake was airbrushed in pale gold, just for an interesting sheen. And then… delivery time.

In her super sparkly dress, my Matron of Honor Dayna carried the cake in her lap to our venue, while I drove us, in my wedding gown. I’m sure we were a sight. Poor Dayna. Again, another friend roped into a cake duty she full on didn’t expect. But – we arrived safely, and hauled the cake into our reception room about 2 hours before the wedding. But then what?? 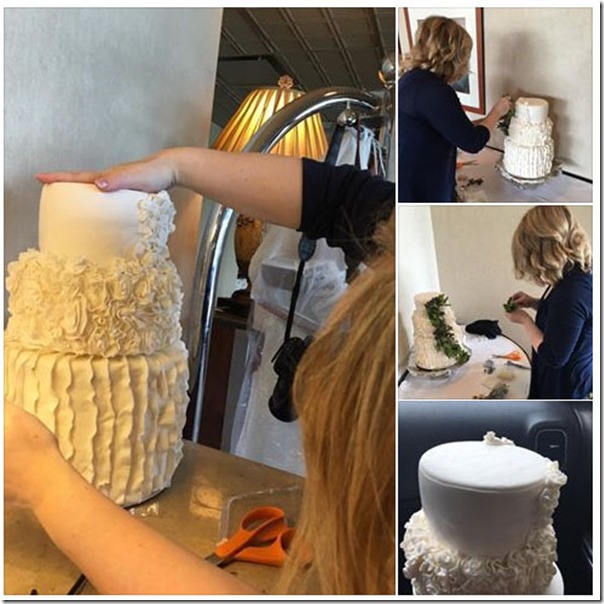 I’ll be honest, I had an IDEA of what I was going to do to complete it, but really, it was just an idea. I had a few extra flowers in a bucket left from the creation of my bouquet – greenery, thistle (yes, THISTLE!), ranunculus, and some purple berries. I also had a few charms I picked up at Michaels that I hoped to tuck away on the cake…somehow. And, the most important items I had? Playing cards and poker chips made of fondant. 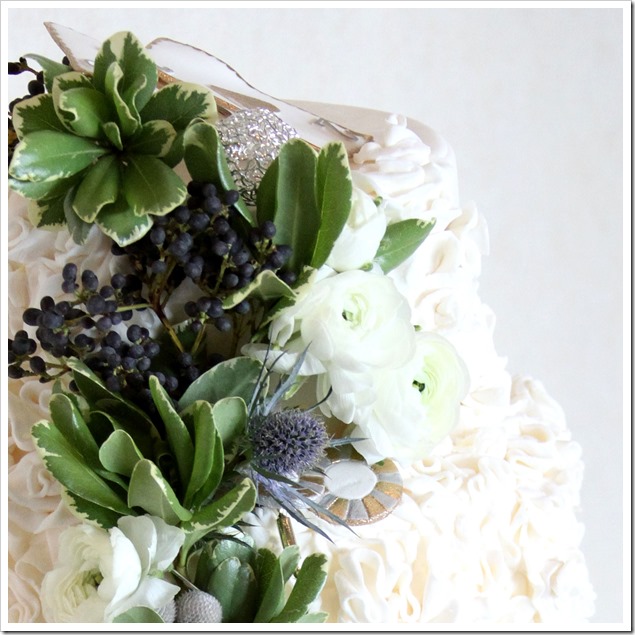 Well, my Rust is a poker guru. He has been in the poker world for many years, and it’s something that’s just HIM. So, I reached out to my online friend (nope, never met!) Janet, and asked if she would accept the challenge of making those items. Sure, I could have made them myself. But I wanted to have some really special touches to my cake, and a way to tie in my internet, real-to-me friends into this very special day. 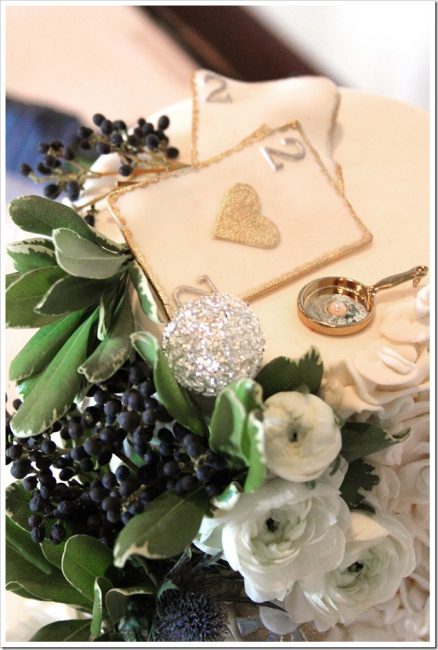 Janet blew me away. The two “Two-of-Hearts” cards trimmed in golden sparkle graced the top of the cake, and the poker chips got tucked in to the greenery along with those charms I mentioned. I had a tiny gold baking pan, a frying pan, and rolling pin to represent ME, and the chips and cards to represent Rust. I think the cake perfectly summed up who we both are, and I am so happy I made it. Rust said it was the best cake he had ever had (he does fib though, but I love him for it), and it proved to ME that after a cake hiatus, I could still produce a cake I loved.

So THANK YOU to Paula, to Mom, to Dayna, to Janet, and to Jessica for helping this bride pull off a wedding cake for my new husband.

You made my day. 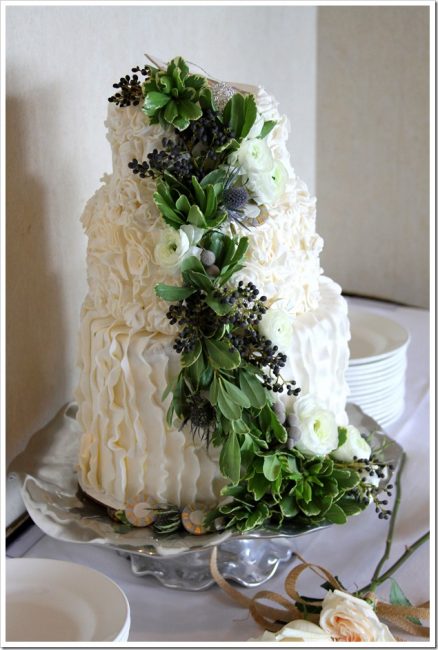 Spread the love
To My Grandfather, Who Never Read My Blog A Weekend in Stillwater, Oklahoma