To My Grandfather, Who Never Read My Blog

We buried my grandfather today.I’m not sure how.

Physically, I mean. How can it be possible that a man so big, so massive in his demeanor, so impossibly alive, could be contained?

Where I am from, in the mountains of Giles County, Virginia, history is a form of currency, and my Poppaw was the richest man I knew. Every friend I ever brought to meet him suffered the same fate: a genealogy exam that led to at least one family member he knew, and why, and more than likely, an embarrassing story about that poor soul.

We loved him for that.

He was a strong man. Perhaps the strongest. He worked harder than most, and expected you to do the same. He valued every dollar, and resented car salesmen who refused to let him pay for vehicles in grocery bags full of singles. He was tight with money, but not to a terrible fault. He grew up in the depression, in a quarry camp, where his father worked. He stole coal as a child, from trains as they came up the river. He had little but love and a steadfast mother. He lied to the army in order to join before he was legally allowed, and he served his country as a gun toting teenager aboard a ship bound for Japan. 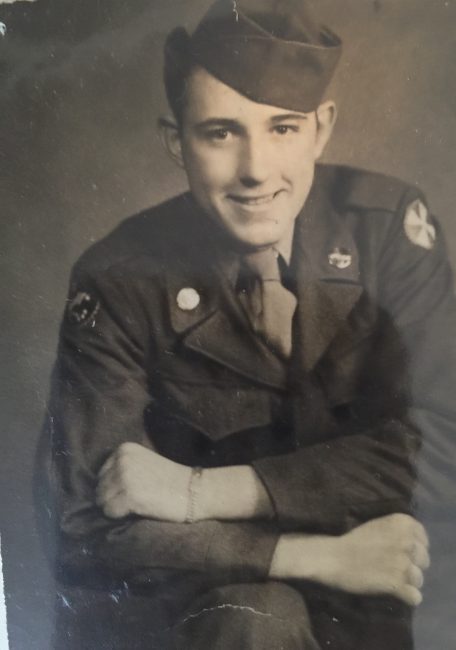 I could tell you the exact route he took across the oceans, but I didn’t pay close enough attention.

I always assumed there would be more time. More time to hear about going through the Panama Canal, he and his young troops sleeping on deck, under the stars versus in their tight below deck quarters.

I assumed I would have enough time to hear more about life in the camp. About family from “around the mountain”. About castrating cats with his brother-in-law and delivering meat for Valleydale. About his mother who kept life bearable for he and his siblings, about how he met my grandmother, and how he thought she was better than he because her family had a rug in the house.

I wish there was more time.

I lived with him in high school, and looking back I’m luckier than I knew at the time. We ate dinner together in the evenings, before iPads, when mealtime was storytime, a treat we take for granted today.

As a child, he packed me up and took me on vacations with him. On week long journeys and afternoon Jeep rides through mountain roads and roads non-existent.

In college he paid me to go to flea markets with him every weekend, where we sold old fashioned candy, dolls, and the contraband of the season. He did love the art of the sale, no matter the product. And he did it his way. Only his way.

I miss that, too.

I never doubted that he loved me. Not ever. But it’s not because he ever said it. In fact, I don’t think he spoke those words to me in my life. It’s also not because he expressed it. He wasn’t a hugger. A kisser. A cheek pincher. No…he was not one who showed his affection with touch. I remember but one time that he reached out to me. I was eight, in a little dress, standing by my Mommaw’s, his wife’s, casket. And he was a tower above me, just a mountain of a man. He bent down and lifted me up, and held me around his neck. I can still feel the buttons of his shirt as we looked down at her. He was crying.

I don’t remember him ever hugging me of his own volition again. But as I said, I knew he loved me.

I knew it because of his eyes. I have to believe that’s where everyone he knew saw it as well. His eyes would dance when he felt love. In a story, or a memory, his eyes would light as he spoke, and for that moment, that was the only light the world needed.

He was hard headed and stubborn, a bull despite being a Capricorn. He always wore shoes. Always. He was die-hard about everything he was die-hard about, be it democrats or diet Soda brands. He was gruff and grouchy, and downright impossible at times. But then he could spin a tale, through a crooked smile and teeth that grasped a twist-tie, and if you said the right thing, you’d luckily catch a glimpse of a golden grin.

It was enough to make you love him. Not that you will ever be able to explain it, that love, to anyone who didn’t know him.

Yes, today we buried my grandfather. I saw it happen. I startled at the 21 gun salute. I bawled to the saddest rendition of TAPS I’ve ever heard played. The trumpeter bellowed the notes that wept the tune, in a way as such that the notes couldn’t fathom they must be played.

We cried as we have never cried.

And as we left I imagine the ground has done its best to swallow up the casket we left behind, but I know without a doubt, it will never take the man.

There is nothing powerful enough to swallow such a soul.

I will miss him. I wish I could tell him that.

I hope he knows…someone please tell him. He never read my blog.