Last weekend we packed up our little Fiat and headed north to Tell, Texas. To be honest, I thought we were going to Childress, which is very far removed, but no, we found ourselves in Tell.

Don’t worry if you have never heard of it. I’m not entirely sure that all of the folks in Tell are aware of it themselves.

Tell, Texas is about 6 to 7 hours north of Houston, and we took a convoluted route to get there. You see, we had in our minds a few weeks ago that once we were back from Leg Two of our adventure (next June), we were going to just buy a Tiny House. Yep, a 30 foot long house on wheels, to pull around the country like freebirds. So, on our way to Tell, we detoured into Austin, where a huge Tiny House Jamboree was taking place.

I’m not entirely sure why, as we had decided at least 2 weeks prior that a tiny house wasn’t our best option. For one, you guys, we own a Fiat. A Fiat does not pull a tiny house. A Fiat is cute and Italian and likes to take midday naps like all good Italians. A 3/4 ton truck costs nearly what a Tiny House costs, and we just aren’t in the mood to purchase one. Plus, we intend to be gone 9-10 months out of the year. Why pay to keep our tiny home parked somewhere if we aren’t even going to be using it? Seemed silly. But, we went to the Jamboree anyway and walked around, assuring ourselves that yes, we made the right decision.

No Tiny House in our future. (You can stop worrying about that now, Mom.)

So on to Childress, by way of Waco. We had a great lunch on the river, then stopped for homemade fudge and salt water taffy at a cute roadside store. Rusty lets me get away with silly purchases like expensive candies if we are on a road trip. Hence, this is why we are going on a year long road trip. I’m no dummy. 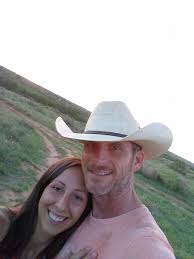 But lets talk about Tell, and our friends who make their home there, the whole reason for this post in the first place.

I first met Scott and Tia back in 2015, a couple of months after I met Rusty. Both of them were in the poker world, which, in Houston, is small but fierce. Scott was a professional player and part-time game runner, while Tia was a game girl. I liked them instantly, though I never said as much. Once I moved to Texas, Scott hired me to make the meals for his games, so I got to know them just a bit better.

People in Houston know that the game of poker has changed drastically in the past couple of years, with legal rooms popping up and underground rooms struggling. Dealers are scrambling to find steady gigs, game runners have scaled back massively. I think perhaps this is one of the reasons that Scott and Tia had already decided to move away, on to something new. Something different. 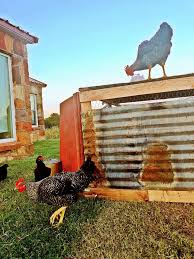 But life stepped in and made their decision for them.

Just as they were readying themselves to move north to a family farm in Childress, where they would help out, learn the ropes, and hopefully make a new life, Scott was handed a hard lesson.

500 acres of prime cattle land, with only a handful of cows on it, was dropped into this poker pros lap, and it was time to sink or swim.

I’ll tell you the truth. The poker community here did not expect much out of this. Sure, Scott has always worn a cowboy hat and boots. But running a cattle farm? No one had much hope.

I’m glad Rusty and I did. In fact, we invested a bit of money into Scott’s dream of making a go of it, sight unseen. Crazy? Perhaps, but we both feel it was exactly the right thing to do. 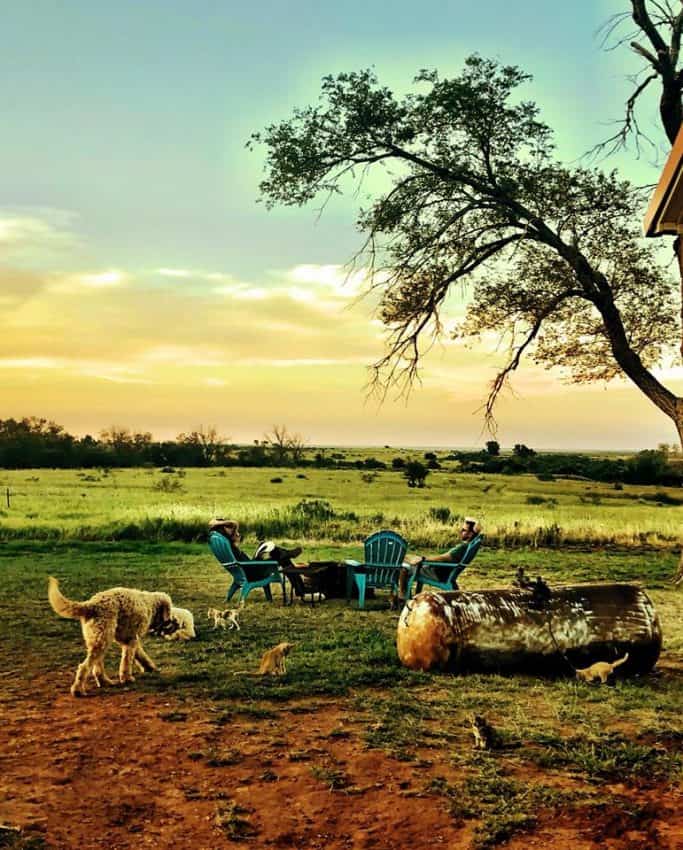 So, we pull into the yard of a small stone house, located on a red dirt road. There are gaggles of bouncing kittens hopping about as we approach the door; a blonde puppy wagging its tail and tongue at us as we say hello. Scott and Tia arrive about the same time as we do, his once spotless black Jeep now covered in splatter of that red mud. It suits it.

As we go inside, two more dogs run out of the house – Gin and Rummy – and another tiny kitten pads its way across the kitchen floor. The house is bigger than it looks from the outside, and extremely well kept. The kitchen is open and airy with its open shelving, containers of homemade kombucha experiments line the racks. Tia makes us BLTs, using organic ingredients, something very important to them. They are running their little farm this way as well – cage free chickens, grass fed beef, no hormones, no nothing. It must be working, as the cattle are shiny and fat, the chickens plump and healthy. Somehow, thanks to YouTube and the rest of the internet, Scott has found his way without the help of his father, and is thriving at a lifestyle he likely never envisioned for himself.

Later in the evening, Tia served us an amazing Mexican Beef Stew (which I am absolutely going to share the recipe with you in another post!), and then we retired to the backyard. As the night air cooled, Scott pointed out the planets to us, and we all gazed at the full moon through the telescope. We watched as the kittens attempted to climb the ailing tree, we waited for the coyotes to come out of the thickets in the distance. We talked about poker and cows, monster hands in Vegas and plucking chickens. We listened as Scott laid out his honest plan, about his hopes for the farm.

We believe in them.

The next morning we bounced off in the Jeep to visit the cows, to see this investment in action. Like a modern day Pavlov, Scott turned us down a well worn trail, honking his horn to alert the cattle that he was on the way. As soon as we stopped, the herd was there, ready for their treat of cattle cakes. He knew each cow by number, knew which of the herd lived on this side of the lake versus the other. He was surprised to see a certain new mother and her calf had split from the “across the lake” herd and made it into this one…apparently the cows are quite cliquish.

We hopped back into the Jeep as one of the bulls made Scott a little nervous – he didn’t know how he would react to having new people around – and we headed over to feed the other herd. 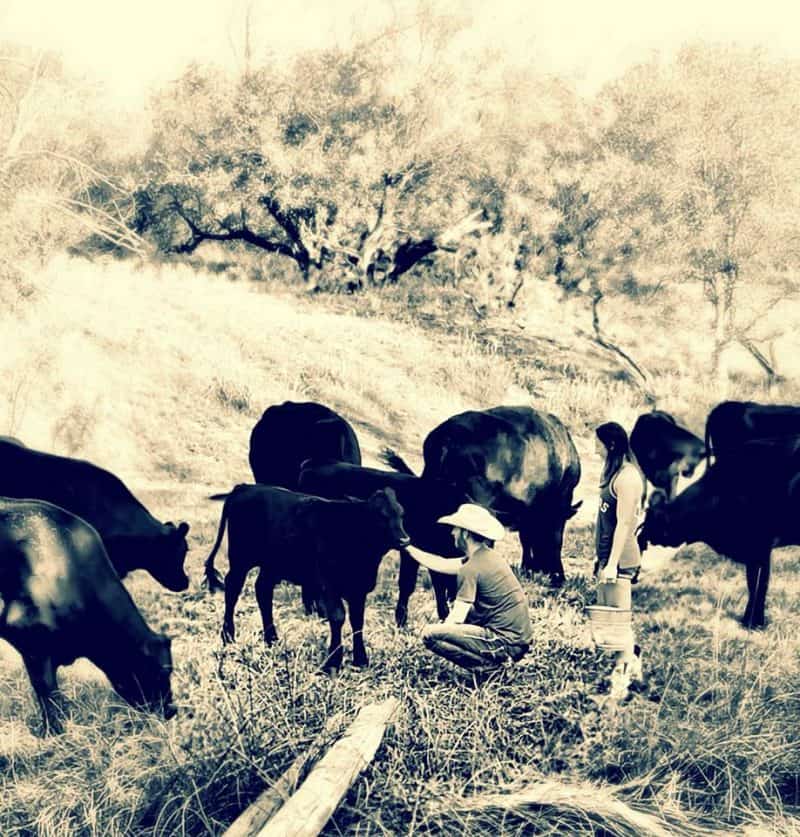 Again, we approached with a honking serenade, and again, we pulled in to find the wide eyed cows waiting. When he called to them, they would answer, bleating their response. A new calf, barely a day old, joined this group, the mother confident in Scott and Tia’s gentleness. Their favorite calf, named Astro, lets Scott pet her. Somehow, in just a few short months, these two city dwellers have made friends with a wild herd, no fear on either side, only respect. It was really something to watch.

I love that I could see this, this transformation of sorts. What no one expected from them, they have done, and they are thriving. I never heard a longing for lights, for a better house, for a closer store. I never saw sadness for what was left behind, or for the lives they had. THIS life suits them, and they seem so at peace. As if, somehow, this is where they needed to be all along, and now, they can breathe. They share a cigarette as they water the front lawn and talk to the chickens, kittens and dogs playing together behind them as we watch.

I am jealous, to be honest, but hopeful. Hopeful that once we, too, leave this city life, with the stress of keeping up with the Lexus drivers and big mortgages behind us, we find ourselves. And we find ourselves living simply, without all the worry, without regret.

I am very hopeful…I know it can be done now.

Spread the love
Eating in Thailand…What You Get for Your Money Leg One, Day One