Leg One, Day One

“I’d be sweatin’ it, I would,” Rusty’s dad sighed from his leather recliner on Monday night. “Not having my own bed to go home to would make me crazy.”

Maybe he’s right, but right now, we don’t think so. No, we don’t have our giant, king sized bed full of down comforters and pillows to crawl into anymore. It’s no longer ours. Nor is the oversized tub I loved to take ridicululously long baths in. Nor is the floor, the floor I spent days upon day on, replacing the wooden planks one by one after Harvey.

None of it is really ours anymore.

Instead, we have each other to call home for the next year, each other to crawl up next to at night for comfort. It may be in a low lying bed in Marrakech, or it may be in a room that Rusty grew up in. It may be on a cruise in the Mediterranean, or at my parent’s home in Virginia. At times, it will be our new bed in Thailand, the one place in this world we know is all our own. But wherever we are, we will be home, because we are together. Dreaming of the day we find the right home in the right town, the home we will buy to call our own once again. We just don’t know where that is right now.

Until we do, we have downsized our belongings into Rusty’s childhood bedroom closet and a length of wall in one of his parents outbuildings. How we managed to get rid of 3100 square feet of belongings and condense it all down to this amount is beyond me, but we did it, and that is where our things will stay until we find a new forever home. For now though, we are true wanderlings, hitting the road for the next year. Every location is mapped out and paid for between now and next August, so while we will in fact be on a pretty strict budget, we can also just LIVE, and enjoy the things this world has to offer when you don’t have to worry about work commutes and paychecks. Things like learning another language. Like studying Ancient Mythology, Classical Music, and the works of Shakespeare. Like taking up yoga, and concentrating on finding happiness from just being, versus always trying to keep up with what society thinks makes a rich life.

Tuesday was Day One of Leg One of this grand adventure. 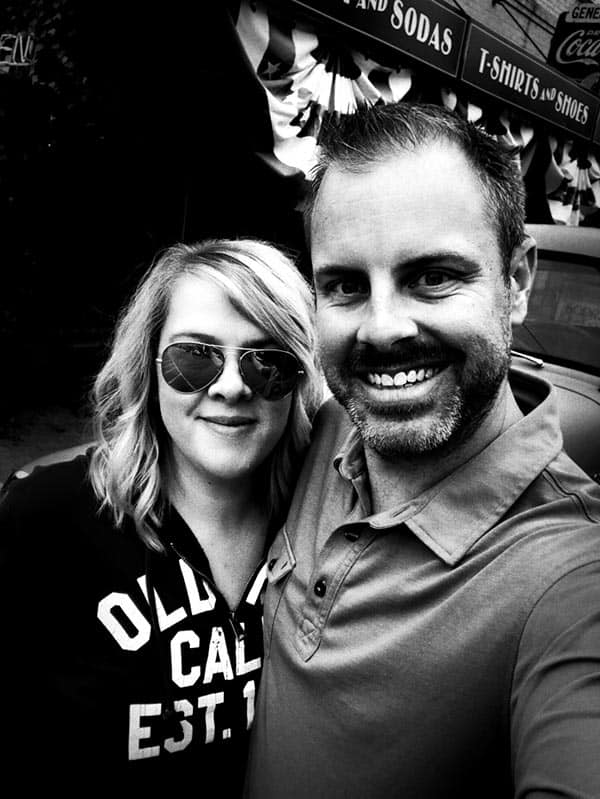 We slept in, snuggling one last bit in Rusty’s old bedroom, before loading the last of our belongings into Fiona, our rainbow topped Fiat. She was piled down, for sure, with items from Seven’s old room in our Texas house, with clothes we will need for the next few months, with computers and board games. She was even loaded with Billy, the 45 year old stuffed Saint Bernard I have from my grandfather who died a couple of years ago. Poor Billy held the pound of rocky road fudge our good friends bought for us to travel cross country with – and let me tell you, 19 hours in a fiercely packed Fiat calls for a good amount of rocky road fudge.

We had no real plans once we pulled out of the driveway. Originally, I had wanted to detour through New Orleans, as I’ve never been, but with the entire southern coast being drenched, tromping around in puddles of rain and GodOnlyKnows on Bourbon Street didn’t really seem like a fun thing to do. Instead, when it came time to make a right or left on the highway, we opted to head north, bound for Memphis, with hopes of maybe stopping an hour this side of town. 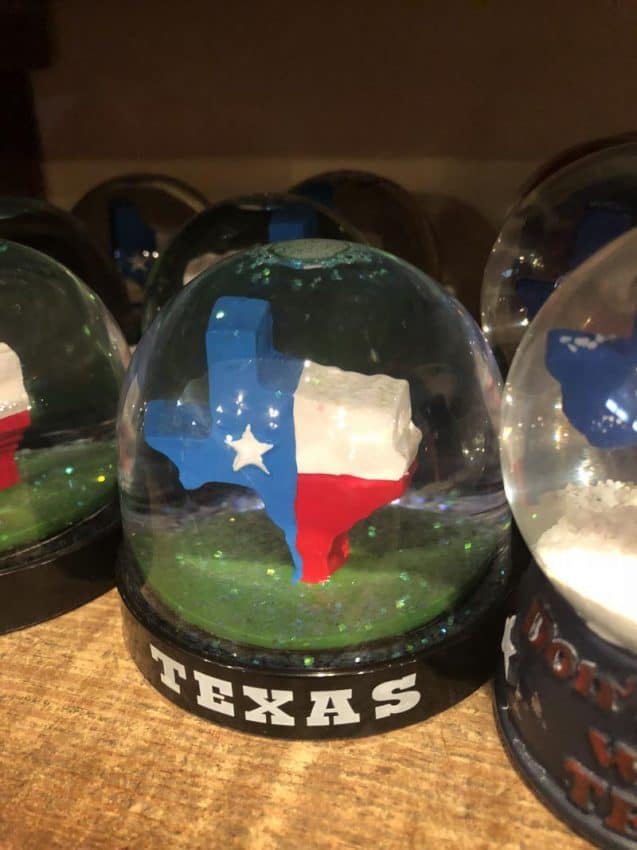 Rusty is a great road trip companion. He always drives, and rarely complains. He didn’t even complain too much about the 2 (okay 4) times I cried. He didn’t complain too much about the soundtrack I chose (“at least I know where to find the music I need to push me over the suicide line in case I ever need it”), nor did he complain about the incessant amount of trivia I dig up on things like Davy Crockett, or where all the gold in Ancient Egypt came from. He’s also a great companion because he knows the value of a charming billboard, advertising what may or may not be the highlight of the day. So, when we saw a giant sign luring us towards a Historic General Store with Soda Fountain and 5 cent Coffee, it really didn’t matter that it was a few miles out of the way. It WAS the WAY. 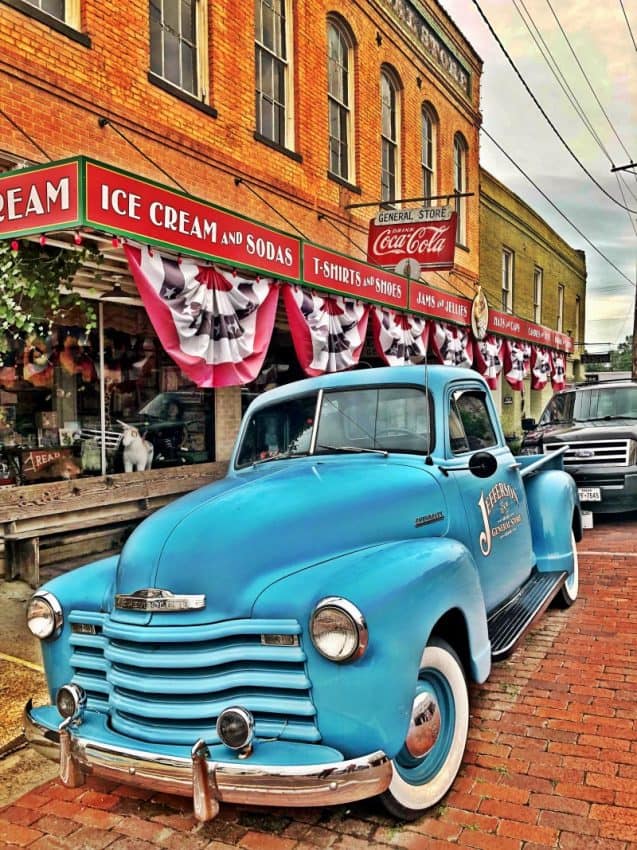 Jefferson, Texas was a fun excursion, and if you are ever nearby or passing through – stop. The store is easy to find in this adorable little town. It is flanked out front by an antique teal truck, with charm oozing from the front porch. As soon as you step inside you are overwhelmed with days gone by. You’ll feel like somewhere, tucked in one of the million corners, your grandfather is watching, waiting to see which old-fashioned candy you pick out. The floor creaks and the air smells dusty and sweet. You want everything, but at the same time, you hesitate to move a single item out of its place. 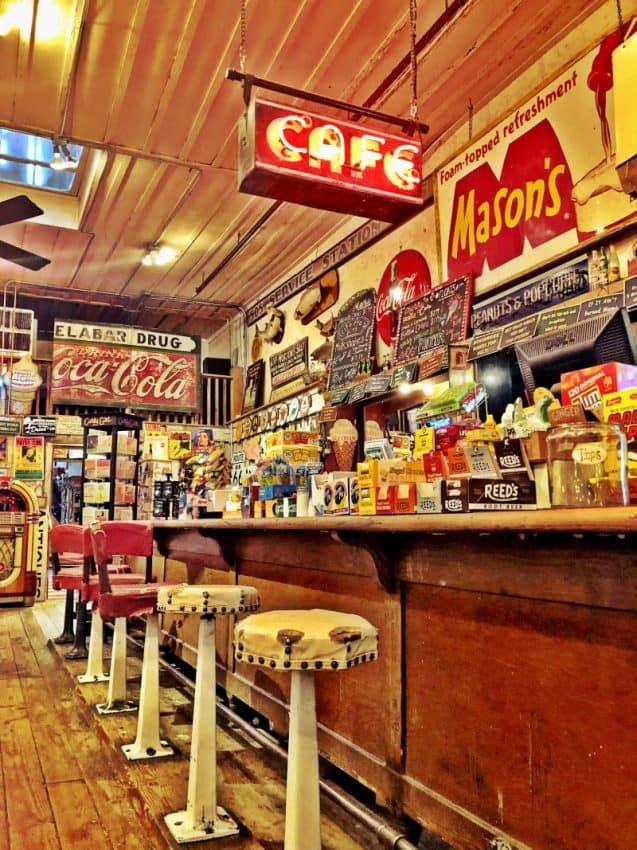 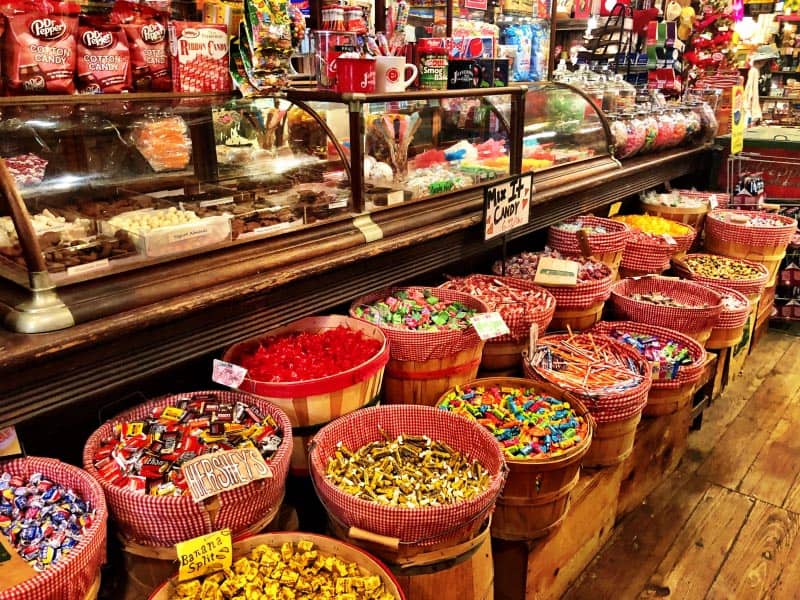 I wish I could bottle it up and take it with me, but places like this cannot travel. They belong right where they are, a bit removed and worth the effort to get there.

After departing with some chocolates and a 5 cent coffee, we once again made our way north. A few miles in, Rusty looked in the rearview mirror. 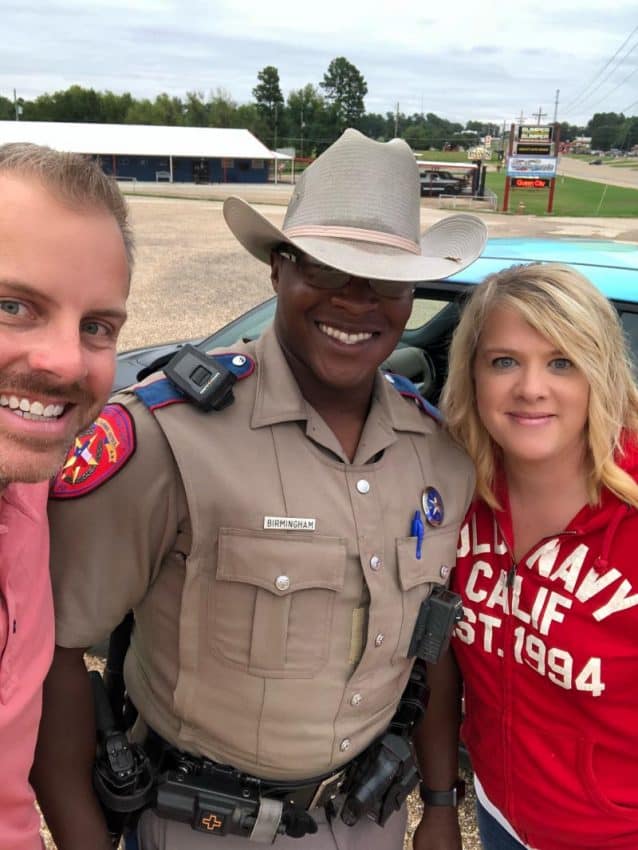 Loaded down with a backseat FULL of boxes and candy and stuffed dogs, we both feared this little snafu would add hours to our journey. Cops would have had a field day going through leather boots and old fashioned fudge and Monopoly pieces if they had wanted to, but our officer did nothing but smile, and give us a warning for not having a front license tag. He was kind and thoughtful, doing his job but not being superior about it. It was actually refreshing, and all three of us laughed as we decided to take a selfie to commemorate this unusual part of our journey.

The rest of the drive was somehow easier than we had imagined, and while planning to stop before we hit Memphis, we soon found ourselves crossing the Mississippi and the home of Elvis. We ended up stopping for the night just on the eastern side of town, happy with the amount of ground we had covered. Day Two would come hours later, leading us across Tennessee, through Nashville and the mountains, and into Virginia.

But that’s Day Two. You’ll have to come back for that.