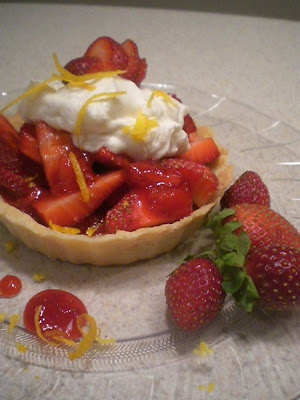 This weeks TWD recipe was right up my alley (I have an alley? Since when? When did I stop eating Pop-tarts?) No really – I love strawberries. Any way, shape or form. I was skeptical, however, of my ability to make Dorie’s tart shell – I mean, hello, it had it’s own page in the back of the book. So like, TWO recipes to make ONE thing. Plus, I didn’t have a 9 inch tart pan with removable bottom, so, fret, worry, fret, worry – will the shells come out or not? I took a chance and baked the crusts in 5 little porcelain tart pans. They were cute (no really they were NEW, and I wanted a good excuse) so I used them. Luckily, the recipe went together without a hitch, even though I didn’t have a food processor. I used my fingers and everything worked out fine. I felt like a pioneer woman, (not becuse of my super-chic apron, silly – because of using my fingers! – You see, she wouldn’t have had a food processor either – keep up) So, the baking times was just a tad less than the 9 inch pan would have been. They could have stayed in a little bit longer, but they were perfect in my book…I like things done just enough – not too much. 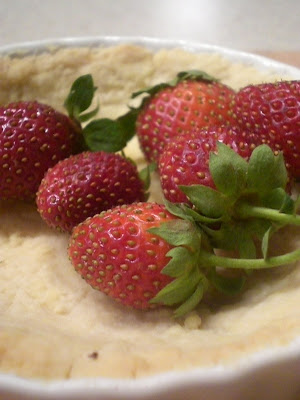 I really didn’t want to deviate this week…there are so may different tarts in the book that going to a different fruit felt like making a different tart. So I stuck with the strawberries. What I DID do differently was this: No jam. So I chopped up some berries and boiled them in about 4 tablespoons of fresh squeeezed orange juice and about a tablespoon of orange zest. I also added about half a cup of vanilla sugar (yeah! that I made myself!) to the boiling berries. I let that simmer for a while, then stuck it in the freezer to set up a bit. Once it had cooled, I plopped it into the tart shell, followed by a heaping pile of fresh berries (some of which were from my own garden (yippee!) and topped it with fresh whip cream (none of that store bought variety). I also finished it off with a bit more of the “jam” I made and a sprinkling of orange zest for prettiness. Will I make this recipe again? Oh yeah! And the crusts are so cookielike and yummy I am too excited to try it with other fruits…I see a long, fat summer in my future, don’t you? 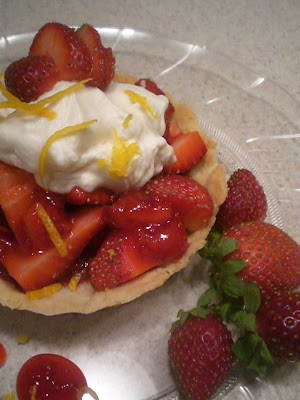 I really enjoyed this weeks recipe, and I am getting excited to see what all of the other TWDers did as well! Go check them out! 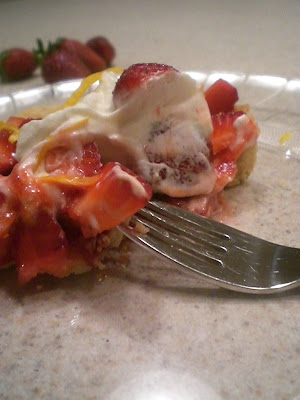 Spread the love
Animal Crackers Grow Up, Susan, and Not Just Your BUTT…