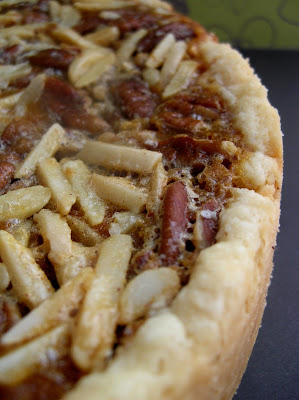 Vibi from La Casserole Carrée chose the recipe for this week…an almost insane combination of Pecan Pie and Pumpkin Pie. You can find the recipe for Thanksgiving Twofer Pie in the book Baking: From My Home to Yours by Dorie Greenspan or here. 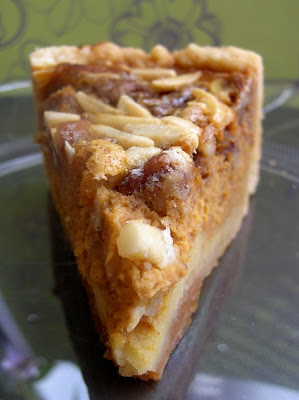 I made this pie for my Husband’s Family Thanksgiving in Harrisonburg, where we will be on Sunday. I know Dorie said this pie is best eaten the day you make it, but darn it, that’s just too bad. I made it Thursday, and we’ll eat it Sunday. I. Don’t. Care. Now, just because I am a good little TWDer, I did cut a piece out and photograph it. I think the fam is fully aware of my picture taking these days, or, if they are not, they will be. Lucky for them I already did it, or they would have to stand around and wait while I did. 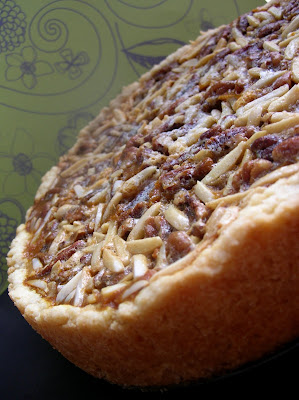 As you can see, I changed this pie up a bit. First off – I love the look of a pie made in a springform pan. Don’t ask me why, I just do. It looks a little less homely, maybe? A little dressier? Also, I used half pecans and half almonds. This is because I am poor, and I am NOT about to spend 9 bucks on a bag of pecans for one pie. it was bad enough spending $4 on the little pack. I had a bunch of slivered almonds, though, that I keep around for when the mood strikes me to make macarons. So I used them…and you know what? It isn’t bad. Pretty good, actually. 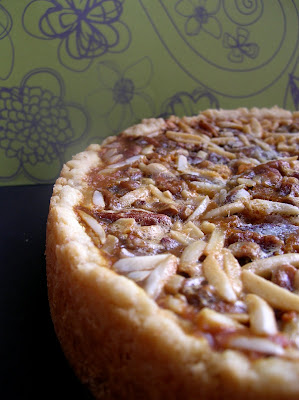 Problems? I had one. The whole pumpkin layer followed by nut layer and then topped with sugary layer? Well, not so much. They ended up kind of all one layer. Oh well. Also, because i made the pie so thick I ended up having to bake it longer. No big deal.
I wouldn’t say this is the best pie I ever ate…but then again, I am new to pumpkin pie in general, and I haven’t quite accepted it yet. Pecan pie? Love on a plate. Next time I think I’ll skip the pumpkin part and just do the pecan. Jon however enjoyed the test slice, and deemed it acceptable to take to the family dinner. It’s almost as if I cared what he thought. Heeeheee.
To see how the rest of the TWD group liked this pie, click here.
See ya’ll Tuesday with the recipe of the week – December already by then. Good grief. Where is the time going??