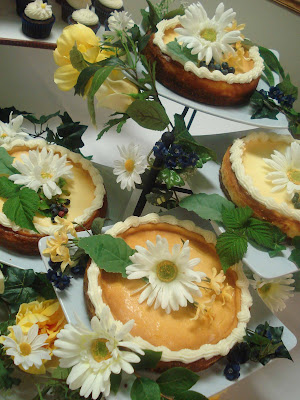 On Saturday, I delivered a 4 tier cheesecake (plus extra cheesecakes pre-cut) as well as 100 cupcakes for a wedding. My Hub works with the groom. The couple are young – 23 – and just as cute as they can be. He grew up on a farm, and apparantly that’s just the ticket for the bride…she’s ready to build their new home just a hill or two over from his still farming parents. It’s sweet, and I have really enjoyed getting to know them. 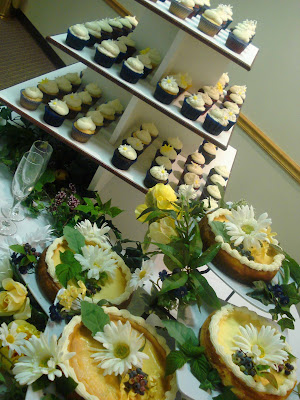 A couple of months ago, they contacted me to see if I would be willing to make a cheesecake wedding cake. Hmm. Never made a wedding cake before, much less a cheesecake wedding cake. But you all know how much I love a good cheesecake. So I agreed, and set out to make a BUNCH of Dorie Greenspans Cheesecakes. I started making them on Thursday and finished them up on Friday. They also wanted a bunch of cupcakes, so I made 4 flavors and decorated them with fondant daisies and displayed them on the stand that Jon made me. 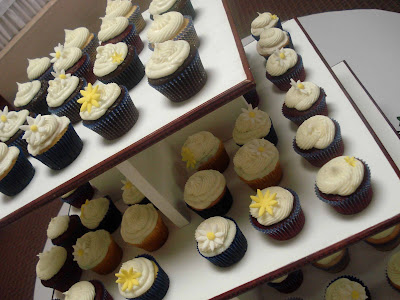 It’s not easy to pretty up a cheesecake. The sides are rarely uniform, there is sometimes a crack, you really never know what you are going to get when it comes to a non-factory made cheesecake, other than it’s gonna taste good. So I did my best and combined the daisies the bride supplied and combined them with fresh greenery from my garden (blueberries and leaves, grape leaves, etc.) and made it very fresh and gardenlike. I also piped cream cheese borders on the top of each tier, hoping to make it look a little more cake-like. I displayed it on a stand I bought a few weeks ago, and I think it turned out pretty nice, considering. Apparantly the staff all liked it, as most of them started snapping up pictures of their own. Plus, the catering hall where the reception was held just so happened to be taking new pictures for updating their website, so maybe I will get a little credit there, too! (of course, there is an equal chance that the cake ends up proudly on CakeWrecks…perhaps I should head over there and check.) 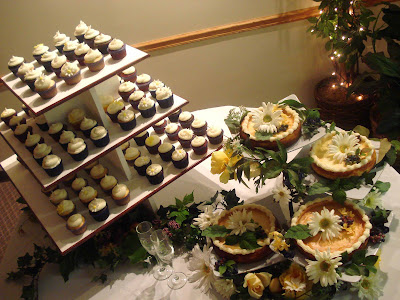 Moving on…here is a link to a FANTASTIC Deal for all you Moms, Foodies, Women out there – Real Simple. The Magazine. For some bizarro reason, you can now get a One Year Subscription for $5. Five bucks? You can bet your butt I am all over that one. You should be too – click and order – there’s no catch! (also, while you are at it, you can get a 2 year subscription to Southern Living, which I adore, for only $9.99 a year – but they will take another $5 off at check out. So that means you only pay $7.49 a YEAR for a wonderful magazine! Get them both and think of all the menus we’ll have to post!

Day 12 Rundown: Zero Spent. We’re gonna have to pick up a few things soon though. Maybe Tuesday. Jon needs stuff for packing his lunch, and we’ll need milk soon, too.

Breakfast: Seven had zucchini bread that his Nonna made on Saturday while I was at the wedding setting up. She used the zucchini from my garden and the rest of the ingredients came from my baking stash. He also had some cheese and some berries. Jon & I skipped Breakfast.

Lunch: We had a late Sunday Lunch at Mom & Dad’s, our typical get-together. This is not unusual, we tend to eat there EVERY Sunday. This has been going on for, um, 7 years, give or take. Not like I changed my lifestyle to get a free lunch…pardon the pun. 🙂
Dinner: Since we didn’t eat lunch until around 3, Jon & I skipped dinner, only snacked around on Zucchini bread and such. Seven ate a piece of Zucchini Bread, some Blackberries from the backyard, (yay, they’re ripe now!)and some leftover Mac & Cheese.
16 Days to Go, $78.49 left to spend.