Mississippi Mud Brownies.  Good heavens.  Look at that gooieness.  Or is it gooeyness? 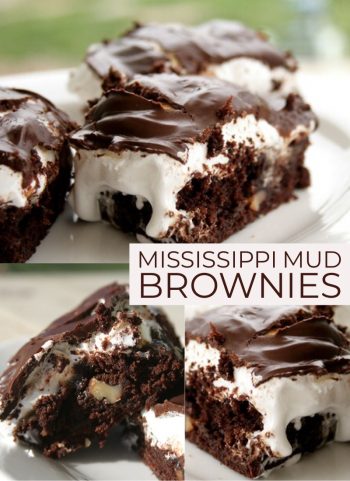 I can’t leave anything alone. That’s my problem. If something has 9000 calories in it, I find a way to make it richer, denser, fatter.

Take these brownies, for example. They are BROWNIES. Brownies are great on their own, right? Why yes, yes they are. And these brownies are actually from a box – again, a new Duncan Hines box mix, this time the Turtle Brownies. I’ve been really enjoying these quick and easy mixes from Duncan Hines, though it’s completely against the Foodie Code of Conduct, I think. I never got a contract to sign or anything, but I think it’s frowned upon.

Like I said, I didn’t sign anything. And it’s freaking good, requires zero work, and I can concentrate on other things, like how to make them even more ridiculous. In this case, by adding a healthy amount of homemade sea salt caramel. And then a layer of thick and gooey marshmallow creme. And then huge marshmallows…and then I toast it all to burn that sugar just a bit. Oh, then I add buttery chocolate to the top, because, well, I can.

I can hear your arteries clogging from here…but oh, what a way to go.

I originally named these morsels of sin Mississippi Mud Snapping Turtle Brownies because they combine two incredible treats: Mississippi Mud Brownies (Brownies with marshmallows, nuts, and a layer of chocolate on top), and Turtle Brownies (brownies with nuts and caramel). I threw the “snapping” in there because of my childhood. Growing up, we used to fish in the pond by my grandmothers house, and it never failed that we’d catch a mean old snapping turtle. Vicious and always biting… Just like these brownies. Prepare an 8×8 baking pan with parchment or foil and leaving an overhanging edge for easier brownie removal. Spray the foil/parchment and the pan. Prepare brownie mix according to directions, but pull out roughly 5 minutes early. Pour caramel over brownies. Add dollops of the marshmallow cream over the still hot brownies, carefully spreading it to cover them. Add the marshmallows. Using your kitchen torch, toast the marshmallows and fluff. If you don’t have a torch, that’s okay, they just won’t get as toasted. Return the brownies to the oven for 5 minutes.

While the brownies are finishing, Melt the chocolate chips for 30 seconds in the microwave, then stir. Add the butter, return to the microwave for 30 additional seconds, stir again. Repeat for 15 second intervals until chocolate and butter are smooth and shiny.

Remove brownies from oven and allow to cool a bit before spreading chocolate over top. Allow to cool completely in refrigerator for 3-4 hours minimum before cutting to allow marshmallow layer to set. Enjoy!

Today is my first day at the Culinary Institute. I’m nervous, kids…do I belong here? Can I hang? Will the hat make me look like a dork? Do you want to see how dorky I look? Will a camera even capture that level of dorkiness?

These are all things to consider.