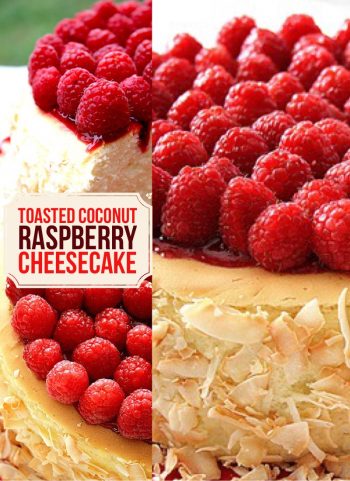 I adore cheesecake. Thick, creamy, sweet. I have to say, my favorite cheesecake is plain, nothing baked in, just the cream cheesy goodness. Sure, I’ll top it with a variety of different things, like chocolate ganache, whipped cream, fruits, lemon curd. But when it gets right down to it, just keep the cheesecake portion PLAIN.

I made a tiny exception here. I knew from the get go I wanted to top this cheesecake with a raspberry gelee and fresh berries. That was a no brainer. I had just been shipped a flat of Naturipe Red Raspberries, and they were burning a hole in my refrigerator. They ached for cheesecake. And if you’ve been reading here for any length of time and you keep a journal on all my idiosyncrasies, you know I don’t like crust. At all. Other than the fact that it holds a cheesecake in place, it’s nothing of use to me, so typically I omit it altogether.

Instead of crust, I wrapped this cheesecake with toasted coconut flake, which was both gorgeous AND delicious. What flavor! And, it played so well with the tart berries. Knowing I was going with the toasted coconut wrap, I decided to add a tiny bit of coconut extract to the cheesecake.

Just another good decision. Sometimes I make them, believe it or not.

I made this Toasted Coconut & Raspberry Cheesecake to take to a family Thanksgiving, and it was a huge hit.  Believe it or not, I was left with one scant piece at the end of the day, which I promptly ate after our 3 hour drive home. I couldn’t very well throw it out, could I? These raspberries were excellent. It is rare that I use a berry in the off season, as we grow our own raspberries, blueberries, blackberries and strawberries. But, when these Naturipe showed up, they were a thing of beauty. So fresh! I was literally afraid Seven was going to eat them all before I could get them on to the cheesecake. He’s a mad man for berries!

Honestly, this recipe for cheesecake is the only one I ever use. Ever. Yes, I will sub out orange oil, coconut extract, lemon zest, even a bit of mint on occasion, but the main recipe? I will NOT change it. it bakes off perfectly, always creamy, rarely (if ever) cracks, and garners rave reviews each and every time I make it. Give it a shot, I think you’ll love it! Just a final note about raspberries…

…so that you don’t feel guilty eating the whole container (not that I did that. Much.)

Raspberries are an excellent source of vitamin C, folate, iron, potassium, antioxidants and disease-fighting ellagic acid. Ellagitannins, a family of compounds almost exclusive to the raspberry, are reported to have anti-cancer activity and contribute to the raspberry’s antioxidant power. They are also a great source of fiber, which has been found to lower cholesterol levels.