Hello all! This is Ashley from Quarter Life (Crisis) Cuisine. I’m thrilled to be doing a guest post for Susan, and so excited for her new book! S’mores have been a favorite of mine forEVER, or at least for as long as I can remember. Back in the day, my family was a team of enthusiastic campers. The most enthusiastic of the bunch? Myself, of course. Because not only could I have sugar cereal all week (instead of plain cheerios, yuck!), but each night before bedtime I was allowed both a toasted marshmallow and the creme de la creme of all desserts according to my young mind–the s’more. This was me at my happiest, in the woods, with a s’more. 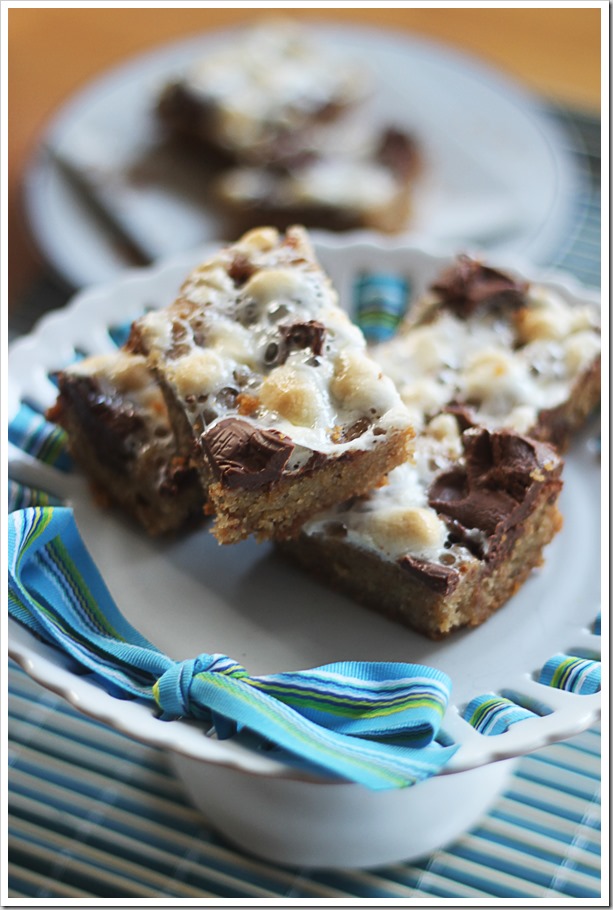 I guess that’s why I tend to turn to s’mores when I’m feeling low. Those early memories of vacationing with my family, before I grew up and had to deal with all the trials and tribulations that the world can throw at you in young adulthood. After my father passed away a few years ago, those memories of camping and s’mores became that much sweeter. When Susan asked me to guest post a s’mores recipe, I turned to an old blog post of mine for inspiration. Despite being a food blogger, I tend to be a writer first and a cook second. Therefore, most of my blog posts tend to be half food, half personal essay. My S’mores Bar recipe was from August of 2011, titled Quarter Life Crisis — Let Them Eat S’Mores. –and the pictures were horrible, because I had yet to learn how to properly use a camera, heh.

The post lamented about student loan debt, living with my parents in my same old hometown, being single, and not being in my ideal situation career-wise. I had written it after ending things with my current guy, and discovering that my debt was even higher than I thought it was. My dreams of packing up and moving to California or New York City seemed so very unattainable and it had all manifested itself in a mini nervous breakdown. I described it as: “Not-Yet-An-Adult-But-Definitely-Not-a-Kid-Anymore Limbo: When you need to act professional but also kind of want to do a keg stand every now and then.” I was not where I wanted to be, but somehow, a visit from an old friend and making the s’mores bars cheered me up enough to end on a happy note. 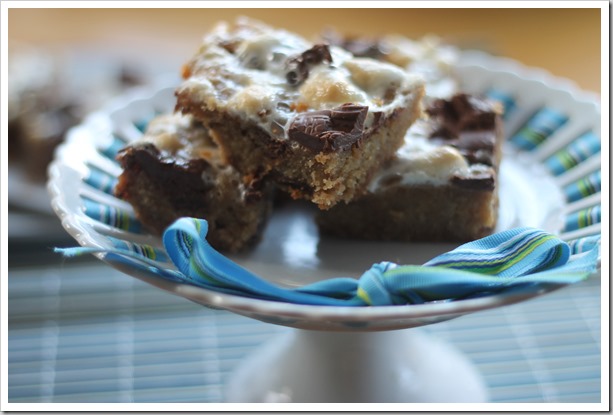 I’ve discovered that cooking and baking soothes me. It helps me focus on something other than whatever is stressing me out on that day. This past week I had been stressing about money, my winter weight gain of 15 lbs that I cannot for the life of me get rid of, and about how I still have yet to move out of my home state. But when I got ready to make these new-and-improved s’mores bars for Doughmesstic, and re-read what i’d written two years ago, it reminded me just of how far I’ve come.

Currently, while I am still not in NYC or LA, I AM living in my first real apartment. I have a tight-knit circle of friends, I’ve embraced local community theater, I have an agent who is pitching my very first book to publishers, and I met an amazing guy. Sometimes it just takes a reminder of where you were, to truly appreciate where you are.

This recipe is an update of the one that helped me out two years ago. Next time you’re feeling stressed, I hope it can help you too! 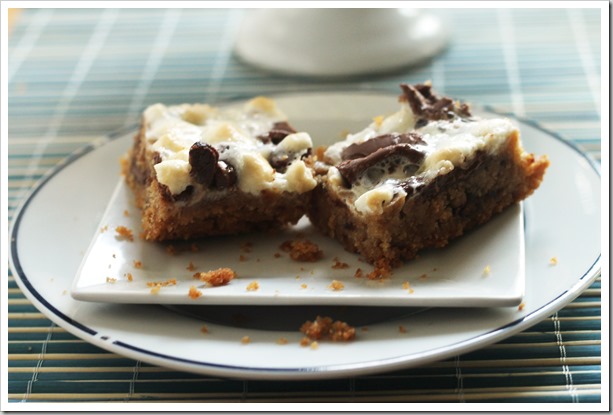 (Inspired by a recipe in FamilyFun Magazine, now Spoonful)

-Lightly grease an 8-inch-square baking pan and heat the oven to 350 degrees.

-Mix together the melted butter and 1 cup of the graham crackers. Evenly distribute onto baking pan and press down. The bottom of the pan should be entirely covered with a thin layer of this mixture. If needed, add more crushed graham crackers. Place in oven while you prepare the

-In a large mixing bowl, cream the butter and sugar until fluffy. Beat in the egg and vanilla extract. Add the remaining crushed graham crackers, flour, salt, and baking powder and beat until well mixed, stopping occasionally to scrape the sides of the bowl.

-Add half of the marshmallows and half of the chocolate and mix until just blended. Remove baking pan from oven.

-Spoon the dough evenly over the graham cracker crust. Bake in oven for 20 minutes, then remove and add remaining chocolate and marshmallows. Return to oven for an additional 10 minutes.

*omit vegetable oil if you’d prefer a more cookie-like texture. I wanted more of a brownie texture, so I added this in. 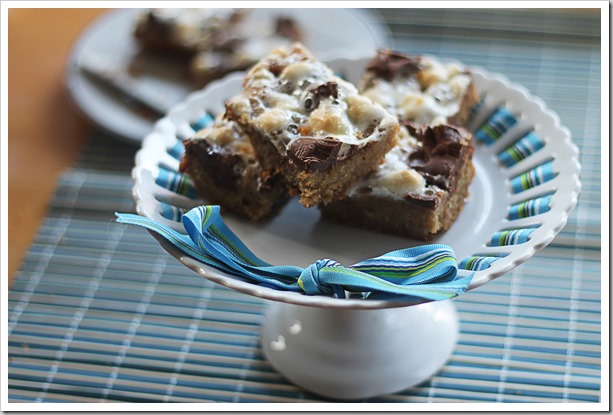 Thanks SO much, Ashley!  I love everything about this recipe – it sounds delicious!

Okay kids…head on over to Ashley’s site and enter to win a copy of my book – she’s giving one away!  And, while you’re there, check out her other great recipes…I think you’ll love them!