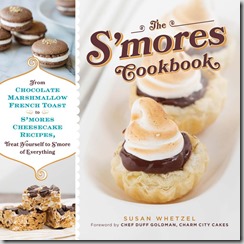 Are you tired of hearing me say that?  I’m sorry.  But it’s so true.  The past two months have literally slipped through my fingers like a handful of water.  I remember Seven’s last day of school, going to a few Mommy/Son Movie Dates, and then, bam, the book launched, and the rest is a blur of fancy foods, great bloggers, and a multitude of Delta flights.

Bonus for flying so much?  Free upgrades to first class.  So believe me, I’m not complaining, and I do love Delta.  But I can tell you more about the Atlanta Airport than you’d ever like to know.  In case you decide to plan a little vacation there, let me know.  There’s a Minute Suites, a Chili’s, and even a really fun train that no one ever makes you depart if you don’t want.  Plus – all that duty free liquor.  Really, a quality vacation destination.  Oh, and the best part?  If you want, there’s the added bonus of a good pat down if you play the TSA just right.  Just saying.

But let’s talk about Chicago, shall we? 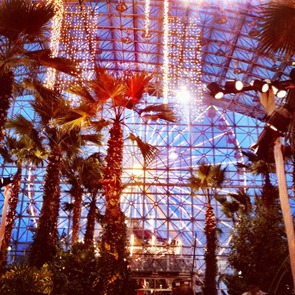 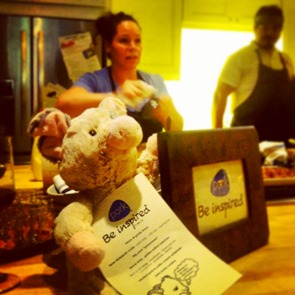 I was in town officially for the BlogHer conference – which brought in thousands upon thousands of bloggers from all walks of life.  I of course wanted to meet a few, so I went to events – The Land of Nod threw a fun shopping adventure, there was a glam party on Navy Pier at Crystal Gardens, the fine folks at the Pork Board had us over to Stephanie Izard’s Little Goat Diner for an amazing meal prepared by Stephanie herself, Verizon Wireless hosted an huge blow out at the Modern Art Museum…and then I hosted a little shindig of my own…at the Hard Rock.

You may recall that I’ve worked with the Hard Rock before, starting in Atlanta, where I hosted The RockHer Blogger Bash for 200 of my closest food blogging friends. From there I moved on to Nashville where a group of bloggers were invited to judge and choose the best burger to appear on the new menu.  So who else would I look to to host the first S’mores Blogger event? 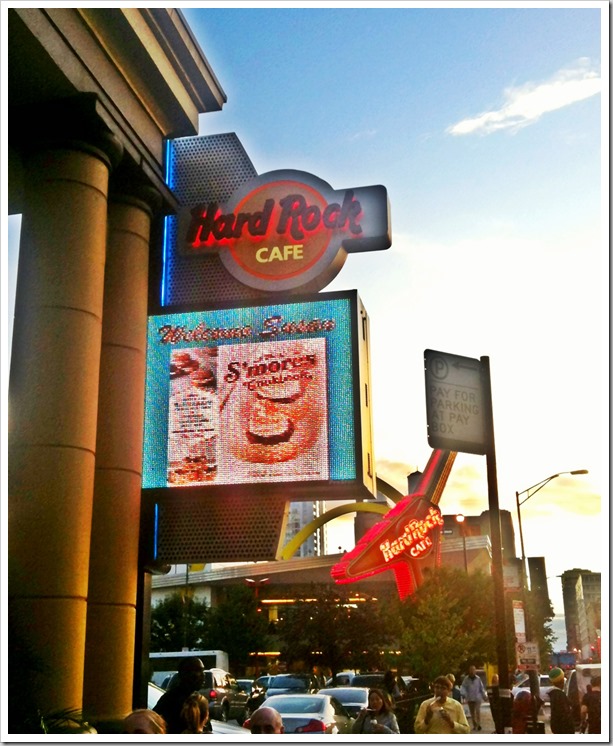 The Hard Rock Chicago outdid themselves with our group, giving us a great location to mix and mingle, feasting on their delicious appetizers as well as a variety of s’mores desserts they created just for us.  S’moretinis, S’mores Dip, S’mores Shakes – you name it – we had it.  And just look at the billboard! 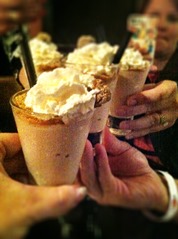 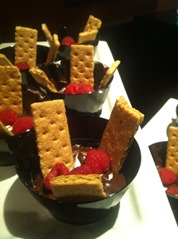 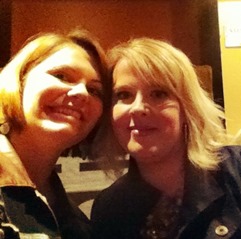 And, thanks to Hershey’s, we had so much swag to give out!  Fluffy beach towels, s’mores kits, and of course, copies of the book were sent home with everyone there.  There was enough chocolate there to float a boat, and even the staff got in on the chocolate celebration…such good moods come from Hershey’s!

As you may recall, I am a bit of a nervous chick, but things have to be done sometimes.  And there was a gal coming that I have known for 5 years now that sadly I had never met.  Not in person, anyway.  We’ve tweeted, emailed, Facebooked – but laying eyes on each other had never happened.  And that gal is Jamie, the force behind Sticky Feet Part Deux and Five Wooden Spoons.  I met Jamie when we both got involved with Tuesdays with Dorie, and I just connected with her and her stories.  You should check her out!  Anyway, Jamie showed up to the event early so that we could grab a bite to eat and gossip, and was she every bit as amazing as I had imagined.  And gorgeous.  Smart, beautiful, kind…she’s the whole package. So of course, I secretly hate her.  I can’t live up to that. 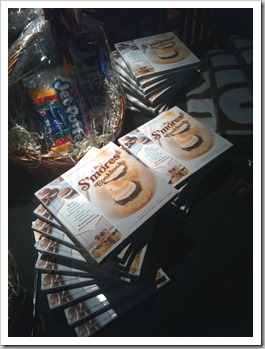 I wish I had gotten the time (or rather, had the nerve) to sit and talk to EVERYONE who came, but who am I kidding?  My social anxiety kept me in pleasantries, and I did get to TALK to everyone, but as for full on conversing?  Well, luckily they all seemed to have a good time hanging out with each other and eating!

The rest of my weekend I spent shopping, eating, shopping, getting my hair cut and colored, sightseeing, and shopping.  I’m a good shopper, and even better at packing!  I managed to get 2 new leather jackets, 2 new pair of shoes, and 14 bags of party swag into the one carry on I pack for all of my trips.

As part of my sightseeing, I met up with Amanda on Sunday and spent a fun afternoon on the Chicago River taking in the scenic Artitecture Tour.  If you’ve not done that, it’s a great way to see the town!  Afterwards we headed over to the former Sear Tower (now the Willis Tower, but I’m sorry, that’s just weird – don’t change names of famous buildings) and she encouraged me to get over my fear of heights to experience the SkyWalk. 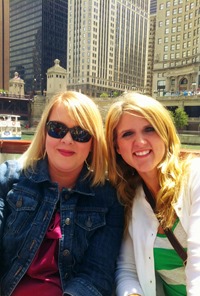 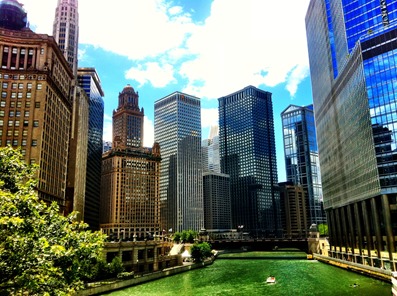 It was short lived…the wait to get up there was over two hours.

What are two photo hungry gals to do when faced with news like that?

We took a cab over to the Hancock Building, which offers similar views from just a bit lower.  And CHEAPER.  We actually lucked into that by talking the WRONG elevator.  You see, you can pay an entrance fee to go up to the top and just look around, or, you can head up to the restaurant on the top and have a piece of cheesecake for half the price.  From there you can see the entire city, and enjoy a pretty decent dessert while you take in that stunning view. 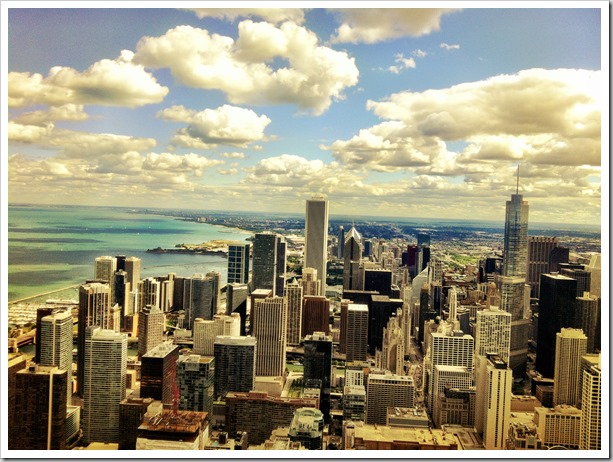 Thanks for hanging out with me all day, Amanda!

So there’s my Chicago news. Thanks for letting me share!  Next town up…Boston!