Let me tell you about the best weekend I have had in quite some time.

I should have known it would be – the 2012 Greenwich Wine & Food Festival was amazing. So why would I think the 2013 festival would be any less impressive? 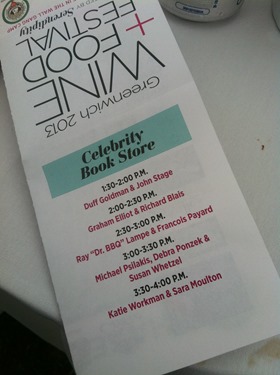 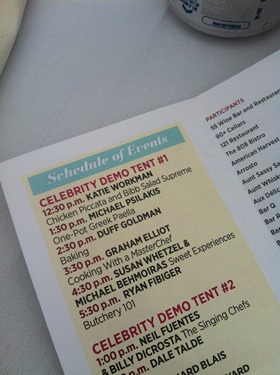 First of all, I was there as a “Celebrity Chef” this year (I know, I am laughing, too) versus a regular festival goer. Yes, I ended up last year on stage with Duff Goldman, I had some great food, great wine, and met great people. It was life changing.

But this year was oh-so-much better.

The crowd was bigger. The vendors were incredible. The music was top notch. There was something there for everyone, and I do mean everyone. Lots of Celebrity Chefs (Hello, Richard Blais?), VIP Tents, food and drink from the best of the best…it was fantastic.

Me? I did a demo on stage in Tent One, courtesy of Dixie Crystals, immediately after Duff and Graham Elliott. I was there with one of my best friends, Chef Mike Behmoiras, whom I’ve written about ad nauseum on here as of late. (I can’t help it folks, I adore my friends, and he’s a stellar chef to boot.) Together we demoed a deep fried pudding s’more. 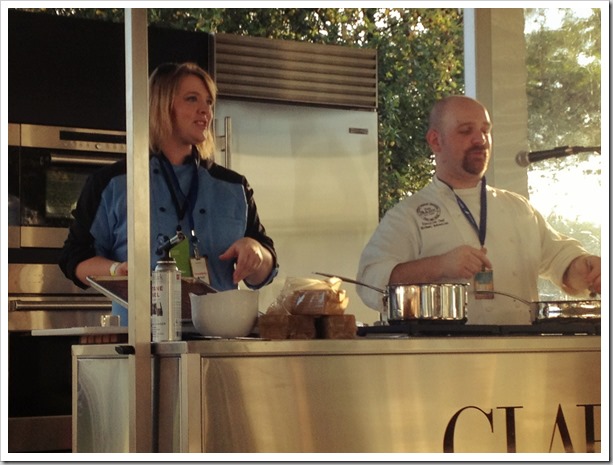 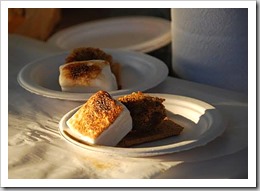 Sure, we ran into a few obstacles, such as everyone’s demo ran late, so ours was late as well. By about an hour. We only had one mic. The band in the adjacent tent started playing about 5 minutes into our talking. The refrigerator wasn’t cold so some of our demo pudding was too soft. The electricity kept going out on our deep fryer. It was a challenge, for sure. 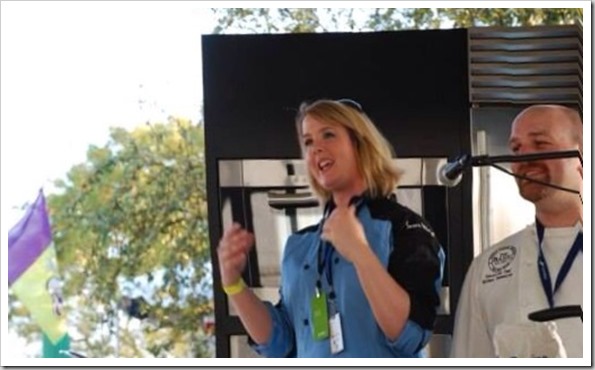 But you know what?

We made delicious s’mores, everyone in the tent got to sample, and we left unscathed. Mike is a trooper, and kept my nerves at bay, because he’s so laid back. And you know what else? You’ll never find anyone as adept at frying things as Mike. Truth. I’ve said it a million times – that man can deep fry ANYTHING to perfection. I mean, he deep fried chocolate pudding. In a faulty fryer. Really? See why he’s my friend? He deep fried pudding.

It was fairly awesome. 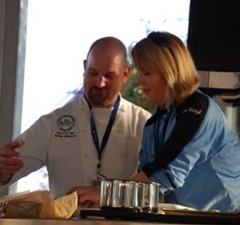 One other wonderful thing that happened was that we were surrounded and supported by friends.

In a small, waterside park in far-from-home Greenwich, Connecticut, we had friends from all over come out to watch us. Mike’s friends came in from New York City (loved these folks!) and I had friends, bloggers and bakers and college buddies alike come from as far as Boston, as well as NYC and beyond. The whole front of the tent was full of familiar faces and we were incredibly touched to have ALL of them there.

Seriously? How amazing is that?

Mike and I also had plenty of time to check out the rest of the festival, both together and on our own. I’m pretty sure Mike sampled more than I did (he’s not the nervous nelly I tend to be, plus, he had extra time while I was signing my cookbook – alongside Michael Psilakis!), but we both found inspirational foods and drinks that we’ve both been going on and on about since that day. Honey Bourbon drinks, the new Stella Cider, bacon popcorn, you name it, it was there. We ate and drank it all! 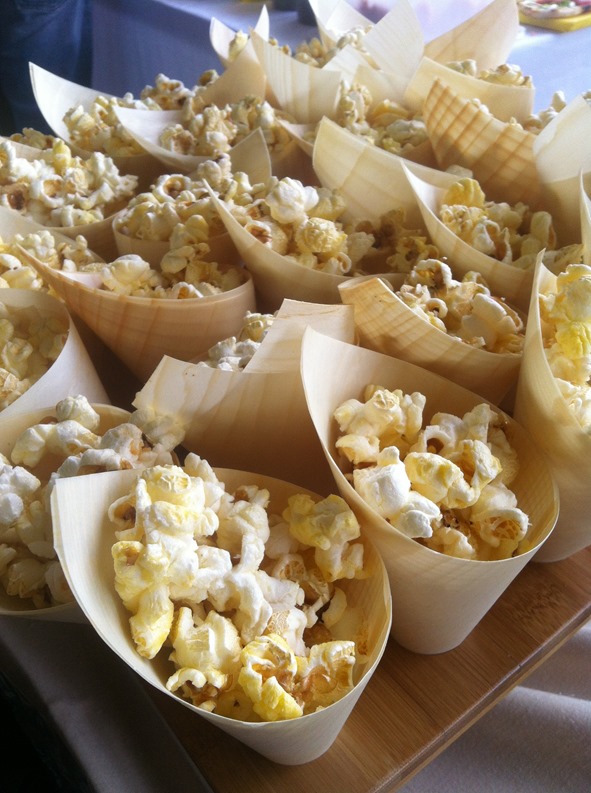 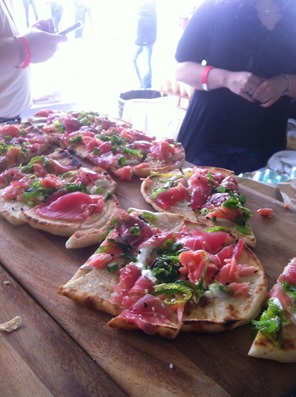 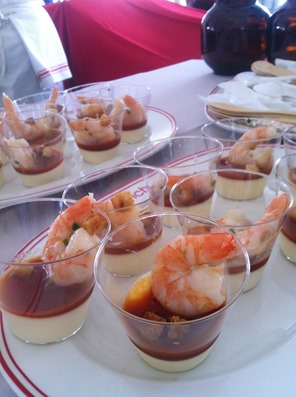 Of course, I did spend a little one on one time again this year with Duff, whom I hadn’t seen in a few months. Despite his silly shoes (they have his face on them!) he was as cool as ever, and it was nice to catch up. He’s got a lot of irons in the fire, as per usual…and though we don’t talk as often as we used to, I’m very glad to call him a friend.

Other friends? Well, I can’t hardly name ALL of them that were there, but one in particular I HAVE to shout at is Sam, the Dessertist. I met Sam here in Greenwich last year, and she stepped up to the plate for me this year in a huge way! 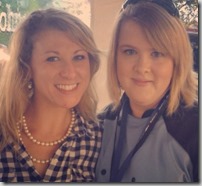 It was great to spend some quality time with such a fine lady, and since the festival this year, I don’t think there’s been a day go by she and I haven’t texted! In fact, I’ve talked sweet Sam into blogging, and she’s going to rock it…Gotta love how the world can be so small sometimes.

Oooh – I made a beeline again this year over to my friends at Preppy Pig BBQ. Those folks are incredible. Yes, they are extremely kind, smiling, welcoming, and downright joyous, but they are also the most talented meat makers you’ll ever run into. No joke – the things they do with pork belly will make you drool. They kept me fed (and kept my huge green purse tucked safely away!) so I can’t say enough good things about that crew. Look them up!

If you haven’t been to The Greenwich Wine and Food Festival yet, be sure to check it out next year. I’ve been to lots of shows, but this one is by far one of my favorites. It’s run by wonderful ladies, in a wonderful location, and for a wonderful charity – Paul Newman’s The Hole in the Wall Gang Camp. They raised a ton of money for these kids!

Thanks for letting me share my experience – as I said, it’s one of the best weekend’s I’ve had, thanks to friends like Mike and Sam and Duff, and thanks to the bloggers and other friends who made the trip to support me, and to Dixie Crystals and Serendipity Magazine for allowing us to share our love for food on stage. We had such a great time! 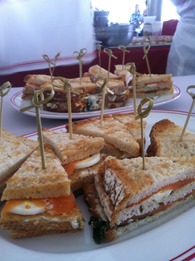 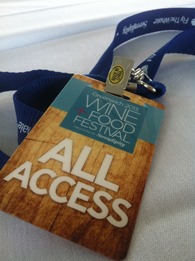 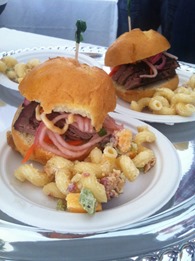 PS – I need to thank Leah of Leah’s Life because I full on stole some of these pictures from her. She was there in the crowd as one of my supporters. Thanks, Leah!

PPS – Thanks, Mike. For not sleeping, for ironing my jacket, for keeping me in drinks, for calming my nerves, for the NYC walk and talk, and for being my friend…you know I don’t make them easily.