Arriving and Settling in to Pattaya

I mean, I’ve been here before, more than once. But it’s far. The three of us, Rusty, Seven and I, flew from Houston to Tokyo on Monday, non-stop. It was almost 14 hours. We had a 4 hour layover, then a 6 hour flight to Bangkok. No issues, no delays…really smooth sailing. A taxi from Bangkok at 11pm took us to a condo-hotel in Pattaya, where we arrived a little after midnight. 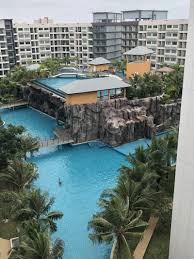 Things got out of sorts then.

The condo folks, despite knowing our late arrival, failed to leave a key for us. No key. Luckily, the security guard felt sorry for us, unlocked the lobby, and let us sleep the night away on two small couches. We were supposed to stay two nights there, as our own apartment wasn’t fully furnished, and we hadn’t even seen it yet. So, we booked this condo to give us a comfortable place to stay until we could get our own set up. 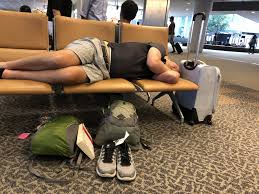 After the night in the lobby and a back and forth with an obstinate leasing agent who wanted FULL PRICE despite her admitting her failure, I told her thanks but no thanks, and we headed off to our new place, the Laguna Beach Maldives.

We paid the remainder of our fees at the main office, then took a quick taxi to the complex. It’s rather big, with over 1600 rooms! There are 7 buildings, surrounding a huge pool lagoon…very nice.

Our room is a type of studio efficiency. Nothing fancy, but nice. Of course, it comes with no style whatsoever, just a blank white room. We did get a furniture package included in the price- a bed, a table and two chairs, and a console table and 2 nightstands. I brought really nice sheets from home, so we knew we could sleep with at least those, and we brought a small air mattress and sheets for Sev, too. Better than that stupid lobby, but not by much!! 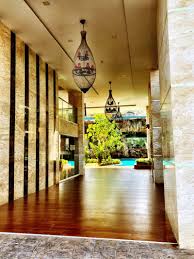 However, after asking the sales office for some shopping help, they recommended a store called Index. So, an hour after seeing our room, we were in a taxi to Index. Index is very similar to IKEA…but maybe a little better? It has tons of furniture, plus every electronic, appliances, and more.

We purchased more bedding, towels, plates, glasses…and a big fridge, television, and a great pull out chair sleeper for Sev. Those big items will be delivered tomorrow…and we are really looking forward to it.

We also found a grocery store nearby, and stocked up on fruits and snacks to keep here. It’s saved us a lot…we don’t eat much here at all. I’ll cut up an apple and orange, and we will all share it for lunch or breakfast. Things will change a little once we have the fridge- right now we have to be mindful of what we buy because there’s no way to keep it fresh. 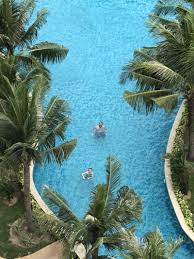 As for the complex, we really like it. The pool is the most massive I’ve seen. It’s two levels, and fills the entire center. We tend to hang out in the upper pool, as there is a better seating area up there. Sev has always been a timid sort in the water, but since being here he’s really gotten braver. He’s climbing bridges and jumping in…things that seem like nothing to most of us but are huge for him. We’ve spent every day in the pool so far, for at least a couple of hours each day…and yes, we are getting lots of color! (Mine is mostly a shade of lobster.)

While we do love it here, there are a few things we don’t like. One being it’s not complete. There’s still a lot under construction, for example, all of the retail space. There is no cafe, or restaurant or spa, no laundry, no shops. The rooftops are supposed to have gardens and pools as well, but none of that is done. In fact, only about a third of the rooms here have owners that have taken over, like us. 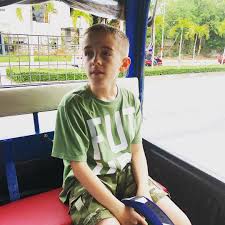 We knew it was still being finished, but I think we assumed we would be part of the last group to show up. I guess not!! Eventually, we think this resort will be incredible, as it has so much potential. Even as it is, we really like it!

We’ve spent the past two days walking the town and exploring, finding little cafes and shops we like. We’ll tell you all about it in another post, so stay tuned for that!