Reese’s Peanut Butter Cup Cheesecake.  It should be a sin, for being so decadent, but luckily, it isn’t.  But let’s talk about something equally vexing. 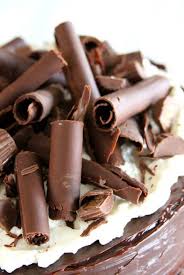 The other day, I posted a question on my Facebook wall…

Do you ever say “Reecie Cups”??

You see, I HAD to ask. My Texan husband, brilliant as he may be, said that saying this was ridiculous, and that NO ONE EVER says Reecie Cups instead of the ever-so-proper Reese’s Peanut Butter Cups…and I had to prove to him that I was certainly not the only one who says this.

Turns out, I got a slew of comments on that post, and the overwhelming majority agreed with me. Reecie Cups are a thing. Perhaps it’s a regional thing, perhaps it’s a southern thing, but nonetheless, it is most definitely a thing.

So is this cheesecake. 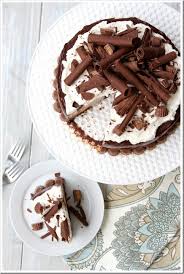 I used to be frightened of cheesecake, believe it or not. A neighbor made me one before I ever started this food blogging adventure, back when I couldn’t boil water, and I looked at that thing like it was from outer space. Yes, of course I knew what a cheesecake WAS, but I had NO IDEA a human could make it in a regular kitchen.

And yet, there it was.

From my very first baking experience making cheesecake, I have found a love for it. Perhaps because there is so much that can go wrong? Perhaps because there are so many steps, so many hours to wait? Perhaps. Whatever the reason, I love making cheesecake, and over the past few years, I have studied and reasoned and created and practiced until I feel I have the perfect base recipes. The base that will serve as all future cheesecakes. The base that will allow you to make a Peanut Butter Cup Cheesecake with NO ISSUES. 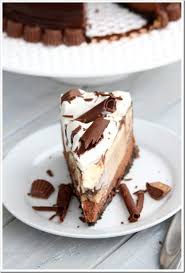 It should be illegal, but thank goodness, it’s not. You can eat it all you want, heck, even hoard it to yourself, but I advise you share it. Your friends and family will love you for it, and just think…every bite you share is about 15 less minutes on the treadmill.

I wish I were kidding.

Preheat the oven to 350 F and grease or butter a 9-inch springform pan. Wrap the pan in heavy duty aluminum foil so that it is waterproof.

For the crust, whisk all the ingredients in a bowl, then pour over the melted butter and combine well with a fork or your fingers. Press into the springform bottom and up the sides, about halfway is fine. Bake on a baking sheet at 350 for 10 minutes, then remove and allow to cool. Reduce the oven temperature to 180.

Place one 8-ounce package of the cream cheese, 1/2 cup of the sugar, and the cornstarch in a large bowl. Beat with an electric mixer on low speed until creamy, about 3 minutes, then beat in the remaining cream cheese.

Increase the mixer speed to high and beat in the remaining sugar, then beat in the salt and vanilla. Blend in the eggs one at a time, beating only until completely blended. Next, mix in the sour cream and heavy cream. Be careful not to overmix the batter.

Remove roughly 2/3 of the batter from the mixing bowl and place in a bowl. Set aside.

Beat melted dark chocolate into batter still left in the mixer. Once mixed, pour into prepared crust and spread evenly.

Place the springform pan in a large shallow pan containing hot water that comes about halfway up the sides of the pan. Bake the cheesecake at 180 until the top is very lightly browned, about 7 hours. Allow to cool in the oven with the door propped open.

Cover the cake with plastic wrap and refrigerate until it’s completely cold, at least 4 hours or overnight. Remove the sides of the springform pan. Ice top and sides of cheesecake with chocolate ganache, and top with fresh whipped cream. Garnish with chocolate curls and additional Reese’s Cups as desired. Keep chilled until serving. 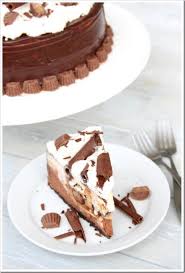 Spread the love
Leg One, Day One A Letter to My Mom…