Fierce Storms in Italy and Changes on the Way

Since Saturday, we have been piled together by the woodfire, watching the rain fall here in Tuscany. 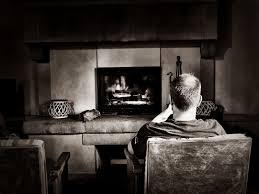 The gray skies and wet weather have not dampened our moods at all, in fact, it felt really nice to have an excuse NOT to be out and about. The weekend was primarily just drizzling rain – nothing too much to fret about – but according to the forecast we knew worse weather was on the horizon. So, we made a quick “last trip” to the supermarket and loaded up on more fresh pasta, sauces, and a steak…and a little bit of chocolate. Everything else we use from the cellar here at our house. Fresh potatoes, garlic, herbs. Apples and pears. We eat as fresh as we have ever eaten, and beyond cheaply – it’s helped our budget tremendously! Escaping Morocco was an expensive endeavor, but, we have managed the setback really well, and quite honestly, it was worth every penny we spent to not still be there.

But back to Tuscany and the weather. 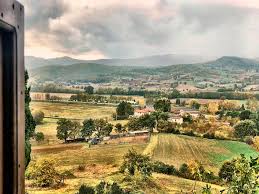 Sunday night the rain really started. In the middle of the night, huge thunderstorms rolled through our valley, lighting up the sky and grumbling the clouds. Our wooden shutters creaked and banged until we could get them pulled in, and even still, as the wind picked up, those shutters continued to dance. Whistles filled the windows as the air whipped in and out of the rooms, each clap of thunder was louder than the last. It was much like a heavy storm in Texas, or Virginia, but…safer.

We felt very safe. Or rather, I did. Rusty can sleep through anything.

These homes are made of stone and the ancient walls are over a foot thick. The walls never waivered, despite our bedroom being on the third floor. Outside, the trees bent and the leaves flew fiercely, but inside, our fire was warm and the storm felt forever away. We were safe.

Yesterday, the storms got worse. 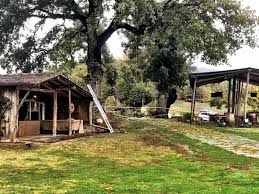 The thunder lessened, but the wind was ferocious. Remember, we rode out Hurricane Harvey. We understand wind and rain. But this wind was incredible. I tried to take a video, but the camera couldn’t even stay focused enough for you to see how crazy it was. According to the news here today, the winds at times were over 120 kilometers per hour, and held steady at about 80. The ancient tree in the front yard lost many of its limbs, as they crashed to the ground. The roof of the small shed has a gaping hole in the center. Lots of planters and furniture are broken or missing…the large sign down by the road that pointed visitors our way ended up in a neighbors barn down the road. Branches are strewn about the lawn – large branches that will require chainsaws – but, everything is okay.

Well, almost everything. I’ve adopted a bee. He’s cold, and hungry, best I can tell. I first found him yesterday in the window, barely moving. So I gave him some pear juice, and today, he’s made it over to the kitchen table. So I just gave him some more. He seems to really like it…but he’s still pretty sluggish. Way better than yesterday, but, he’s not buzzing around like one might expect. I’m not exactly sure what he’s up to, but I’m afraid to carry him outside. It’s still pretty windy, and I’m not sure he can handle it. So I’ll just let him hang out here on the table as I work, and keep giving him the juice if he wants it. 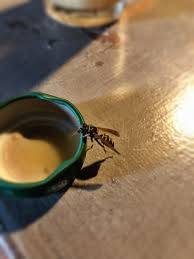 The rest of Italy is not doing as well.

Rome is, for the most part, closed down. The Forum, the Colosseum. Most of the schools, many roads. The wind did a number on the city, as well as the rain, and the recent troubles with the Italian infrastructure have made anything like this worse. Florence fared a bit better, but still has damages. Arezzo, where our owners were yesterday, was hit pretty hard – they watched as the roof of the large grocery store there flew off in one large gust. And Venice? Certainly you’ve seen the flooding in Venice. In places, it is 5 feet high. They closed Piazza San Marco, as the flood waters are hip deep. The city has not seen a flood this high in many years – and only 5 times in recorded history. (FYI, the history of Venice goes back thousands of years). The Venetians, and truly, the Italians in general, have an uncanny way of making the best of a situation, and recovering. So, perhaps when Rusty and I make our way to Venice in a couple of weeks, the flood will be but a memory. It’s hard to say.

In two days, we head down to Rome for the day, to meet up with friends that Rust went to college with, before we head back north to Portofino, where we will stay until we leave for our Mediterranean cruise. Both of us are looking forward to being onboard – but it isn’t because we haven’t adored our time here in Poppi. Because we have. Sadly, the offer we made on a house here didn’t go as hoped, but that doesn’t mean we won’t keep looking. It’s a wonderful area, and we are so happy here. But, the universe may have other plans for us right now. Or, the house owner may change his mind in a month or two, and want to sell it after all. I understand his hesitancy – I would hate parting with it, too. One way or another, things will work out, where they work out.

For now, we are just enjoying the ride.