Readers who are new parents will likely understand the feelings of guilt, paranoia and self-recrimination that come with the early years of parenting. New parents (Moms and Dads alike) have been conditioned to believe that their best is never good enough and that they’re never quite prepared for what the future may hold for them and for baby. Even when your baby is in absolutely perfect health, parents will often think “Am I doing this right?” three for four times a minute, their every action plagued by uncertainty and self-doubt. But when your baby develops a rash or skin condition, even one that’s unbelievably benign, it can provoke enormous worry and stress. And in a climate of Mommy Wars where people seem to take gleeful pleasure in belittling the efforts of other parents who are doing their best, it can lead to an extremely unhappy time for parents which can affect even the happiest of households.

Yet, while our babies’ skin conditions can look scary and upsetting (especially if accompanied by the shrieks and wails which are baby’s only way of communicating that not everything is totally groovy), rarely are they much to get upset or self-flagellating about.

Here we’ll look at some of the most common baby skin conditions for 0-24 month olds, why they happen and what new Mommies and Daddies can do to help their babies heal and ease their itching, soreness or irritation.

Spoiler alert: The cause isn’t bad parenting or negligence. You’re doing a great job. And by staying vigilant and learning what to do when these conditions occur, you’re proving that abundantly. Keep up the great work! 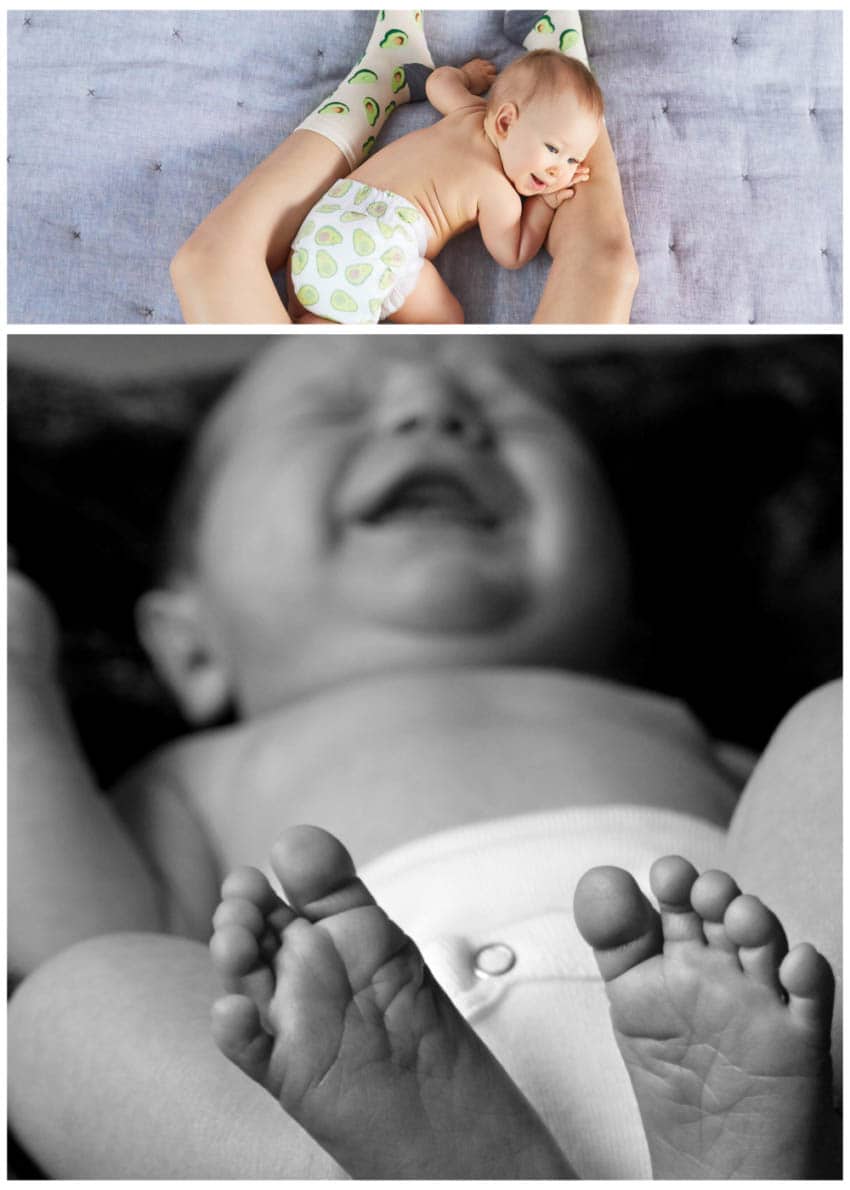 Seborrhoeic dermatitis, better known as Cradle Cap is an extremely common but scary to behold skin condition which  usually presents within the first few weeks of life. It can keep on coming back throughout the baby’s first 4-6 months.

Cradle cap presents as scaly pink patches on the scalp. In some cases, the skin can appear oily and become covered in flaky white or yellow scales. In some cases it can also affect other areas such as the armpits, groin and neck which is why the term ‘cradle cap’ can be a little misleading and result in false diagnoses by smartphone-equipped parents.

Although cradle cap is scary to behold, it’s really just a severe form of baby dandruff. It occurs when there is an overgrowth of the fungus or yeast which is usually present on the skin and can be stimulated by maternal hormones while the baby is still in the womb. In some babies, cradle cap can be an early sign of atopic dermatitis or atopic eczema.

The best way to deal with cradle cap is to first use a vegetable oil like olive oil to soften the flaky scales. Leave this on overnight before washing in the morning with a baby-friendly shampoo. Repeat this process and the cradle cap will recede of its own accord.

Heat rash, often referred to as prickly heat or (less commonly) as miliaria, is an extremely common type of rash that occurs throughout our infant and adult lives. However, newborns are particularly susceptible to heat rash because their sweat glands have not yet fully developed, and as such are easily blocked. Instead of being allowed to evaporate, the baby’s sweat is trapped underneath the skin, resulting in inflammation.

You’re also more likely to encounter heat rash if you live in a state with a hot and humid climate like Florida, Louisiana or Hawaii.

What makes heat rash especially fearsome for insecure new parents is its similarity to the meningitis rash. Heat rash usually presenting as small, pin-pointed red bumps which usually break out over heavily covered sites like the buttocks and back. Yet while the meningitis rash is indicative of a potentially life-threatening condition, heat rash is harmless and easy to counter and prevent. If in doubt, press a clear glass tumbler to the affected area. A heat rash will fade whereas a meningitis rash will be clearly seen through the glass. If you’re at all unsure, contact your doctor as soon as possible. It’s better to be safe than sorry, after all.

To counter and prevent heat rash, avoid dressing baby in thick swaddling or excessive layers. Make sure they are dressed in natural fibers that ill allow their skin to breather and avoid the application of heavy ointments or creams which will block the sweat ducts.

Atopic Eczema, also known as baby eczema or atopic dermatitis is an extremely common and eminently treatable skin condition which occurs within the baby’s first few months of life. In most cases, the baby outgrows atopic eczema although it can recur in later childhood and adulthood.

While it can be itchy and irritating for babies and upsetting to behold for parents, atopic eczema is nothing to worry about and is easy to abate with treatment. It presents as large patches of dry, red and itchy skin and can occur all over the body. It is most commonly seen on the cheeks and on the joints of baby’s arms and legs.

Atopic eczema is often mistaken for cradle cap, there are some fundamental differences. Eczema is usually redder and scalier than cradle cap. What’s more, cradle cap tends to occur not on the cheeks but on scalp, nose, eyebrows and eyelids as well as behind the ears.

The causes of atopic eczema are thought to be genetic. It occurs when the body doesn’t make enough ceramides- fatty cells that help the skin to retain its moisture. When there are too few of these cells, skin gets drier and this results in redness and inflammation.

If one or both parents has eczema, there’s a strong chance that the baby will also develop it and may also have a tendency towards drier skin.

Diaper dermatitis, also known as diaper rash or (in some countries) nappy rash, is extremely common and affects around 35% of all babies at some point within their first 12 months of life with incidences usually peaking between 9 and 12 months of age.

It is caused when the skin spends too much time in contact with the urine or stools contained in the diaper. The excessive moisture combined with friction when diapers are attached tightly results in an angry red scaly rash on the buttocks and other areas covered by the diapers. It can also be caused by a secondary infection from bacteria, fungus or yeast. It can also occur from an adverse reaction to new products such as diapers and baby wipes.

Diaper rash can be extremely irritating for baby which means that their tears and screams are upsetting for parents. The good news, however, that diaper rash is easy to treat and prevent. Apply a thin layer of diaper rash ointment during diaper changes should clear up breakouts pretty quickly.

Of course, prevention is always the best cure, so try allowing your child more time outside of diapers so that cute little tushy can get access to some fresh air and the skin has a chance to breathe. Change diapers often and remember to wash your hands after changing diapers so that bacteria don’t get the chance to spread. Rinse baby’s bottom with warm water as part of their usual diaper changing and pat dry with a towel or allow to air dry. This will help to keep the skin clean, dry and healthy.

All of these rashes can cause great consternation to new parents who are finding their way. But with a little patience and knowhow (as well as a calm head) they can be quickly and easily treated to keep baby healthy and happy!