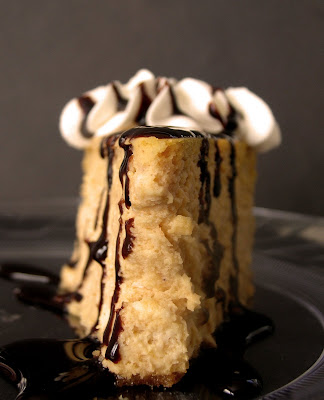 Today is my Hubby’s Birthday. I won’t say how old he is exactly, but it rhymes with thirty-five. So, for his birthday, I ask him…”what kind of cake do you want?”
Him: Eclairs.
Me: That’s not a cake.
Him: Mint Brownies.
Me: That’s not a cake.
Him: A cake made out of eclairs.
Me: Umm, no.
Him: Strawberry.
Me: Strawberry?? Like from the box?
Him: It doesn’t have to be from the box.
Me: Thinking to myself, um, yes it does, to be the kind YOU like.
Me: How about Pumpkin?
Him: ……….
Me: Pumpkin Pie?
Him:……………
Me: How about a Pumpkin Cheesecake?
Him: That sounds good.
Me: Thinking to myself, good thing, ’cause that’s what I had decided you were getting before I bothered asking.
That being said, yesterday after work I came home and set about making this cheesecake. I’ll have you know, I have never made a cheesecake. Ever. Ever. Something about the water bath, the egg yolks separation, blah blah blah. Sounded like more than I wanted to get into. But it’s his birthday, and he really likes pumpkin, and he really likes cheesecake. So I had to.
You would think that if a person were timid about making something for the first time, said person would not screw around with a recipe. Oh but you would be mistaken. The recipe I found sounded great, but, well, I can never leave well enough alone. So here is my take on a Pumpkin Cheesecake… 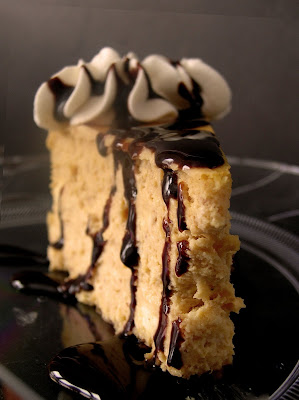 Pumpkin Pie Cheesecake
For Crust
1/2 cup ground graham crackers
5 Tbsp. vanilla sugar
1 1/2 teaspoon cinnamon
1/2 tsp. ginger
1/2 cup melted butter
For Filling
28 oz cream cheese, Room Temperature
1 1/2 cups sugar
3 large eggs
1 (15 ounce) can pumpkin
1 cup heavy cream
3 teaspoons vanilla (I used homemade)
1 teaspoon ginger
1/2 teaspoon nutmeg
1/2 teaspoon Pumpkin Pie Spice
1/4 teaspoon cloves
To make the Crust:
Preheat the oven to 350°F.
Using a 9 inch Springform, line the outside with aluminum foil to make it watertight.
Combine the graham crackers, sugar, and cinnamon and pour the melted butter over. Stir until all are moist and ready to press into pan. Press the crumbs over the bottom (not the sides) of the prepared pan. Bake in the middle of the oven about 10 minutes. Transfer to a wire rack and cool while preparing the filling.
To make the filling:
Using a stand mixer, beat the cream cheese and sugar until smooth and fluffy, then beat the eggs one at a time. Add the remaining ingredients and beat just until mixed. Pour the filling into the prepared crust.
Place the springform pan in a large pan and add hot water to come halfway up the sides of the springform pan. Bake the cheesecake until the filling is slightly puffed and lightly set, and the top is golden, about 1 1/2 hours.
Let the cheesecake cool on a wire rack, then transfer to the refrigerator until ready to serve.
I made a sweetened whipped cream to go on mine – and added cinnamon, ginger and a little vanilla to it. I also decided that while I was at it, I’d go ahead and amp it up a notch with chocolate syrup. 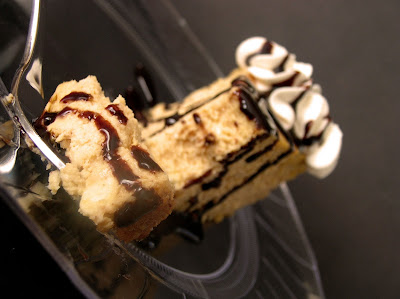 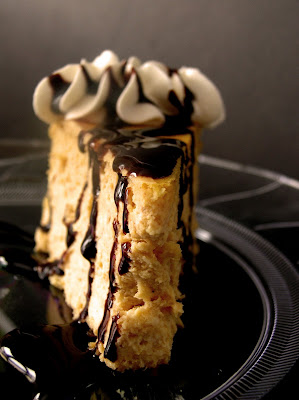 Happy Birthday Kit! Can’t wait for you to get home!